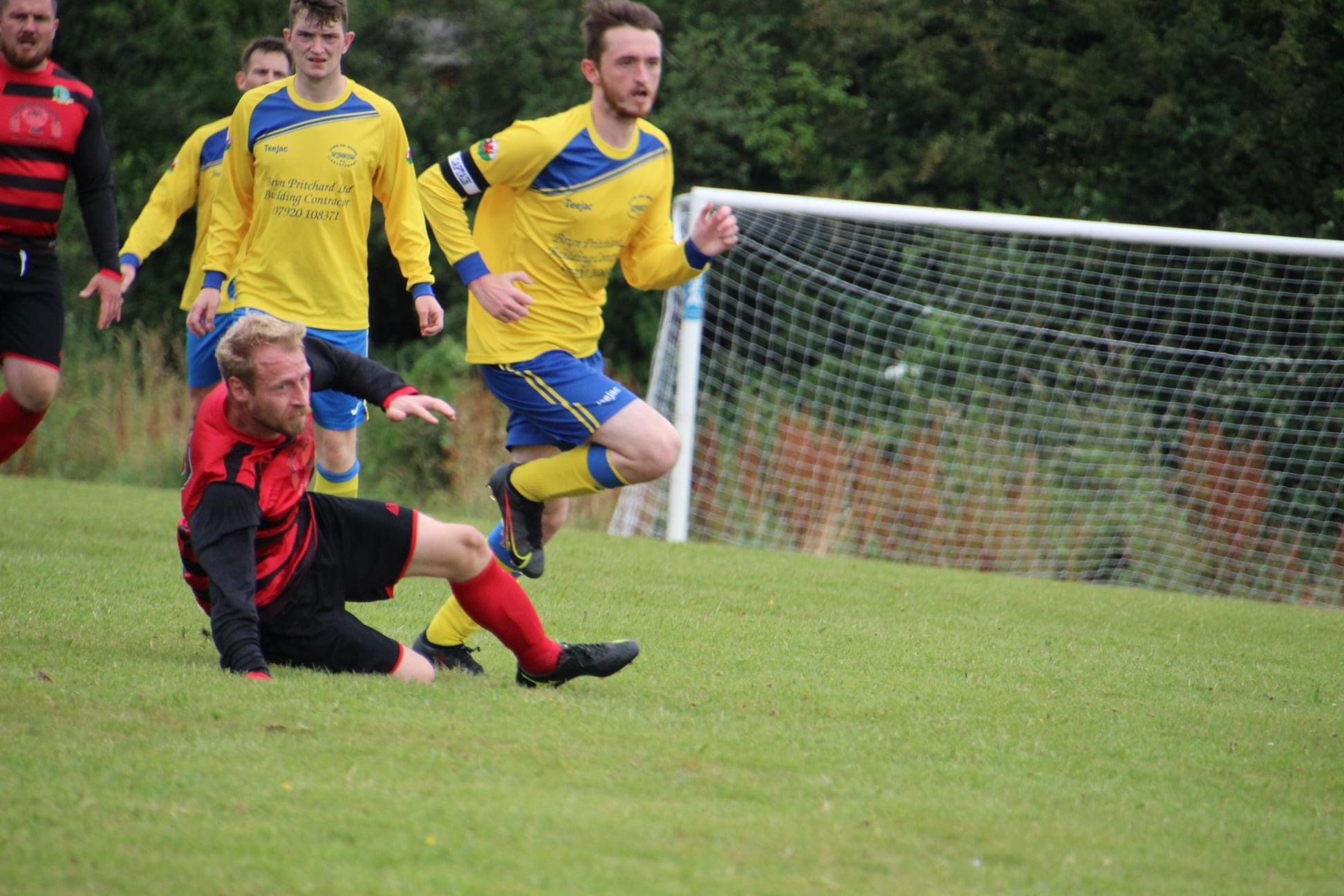 THE 21/22 season is now well and truly firing up and we are beginning to get a clearer picture of who will go on to great things, as well as who will struggle, come the end of this season.

But who is leading the goal-scoring way in North Wales Coast West Division One (Aka tier five) in all competitions?

Well first off it is worth noting that there are currently countless players on five goals for the season in all comps.

So this list is a countdown of those on 6 goals or more for the season so far.

Bod’s main man this season and a player who has experience of playing as high up as tier two with Llangefni Town previously.

Signed from there in 2020, Jones has stood out ever since in the middle of the park for Dave and John Webster’s side.

The 22-year-old has scored six goals in five matches in the league to date – including a goal in last night’s impressive 2-1 victory over Bontnewydd and a hat-trick in a 5-4 thriller which unfortunately saw his side lose to Bethesda Athletic two weeks ago.

Leading the way for Pesda is this young man (in green and black above) who has already notched up six goals in as many matches for his club this season.

The 17-year-old has been quietly brilliant throughout for Mark Hughes’ side so far and looks like a top talent.

Hughes’ most recent goals came as he scored a brace in the 9-0 drubbing of local rivals Bethesda Rovers last week.

Also on six for the season is this dynamic midfielder for Cefni who started the 21/22 campaign off with a double on the opening 3-3 draw v Llangoed.

He’s a very underrated player in the Llangefni club’s squad.

Next we move up a gear on to seven goals and on to the Celts captain who has inspired his team all the way up to the top of the table as things stand.

A tall and commanding figure, Jones has hit 5 goals in the league and one apiece in the FAW Welsh Cup and FAW Amateur Trophy respectively.

A great player and one who will be looking to guide the in-form Celts to glory this season.

One of the many young talents in tier five this season and a player who is certainly one to keep an eye on as the season goes on for this exciting young Bont side.

18-year-old attacker Edwards has scored 7 goals in just 9 appearances for Simon Jones’ side so far and looks like he could be a nightmare to many a defence as the campaign unfolds.

The fact that Sam Williams, top scorer in the Anglesey League with 33 goals in 2019/20, left rivals Mountain Rangers – and cited playing alongside Edwards as one of the reasons for doing so – tells you all you need to know about the future this boy has ahead of him in the game.

A real dark horse in the race for the tier five top scorer prize this season and a player who has burst onto the scene out of nowhere really.

In 2019/20, attacker Williams was a part of the Llandegfan squad in the Anglesey League and provided an assist for Dave Parry (now at Waunfawr) the day they won 2-1 at Pentraeth Reserves – ending a two-and-a-half year wait for a win.

The 29-year-old marked his full Llangoed debut with an opening day hat-trick in the 3-3 draw at Cefni and has been in great form ever since with his latest goal coming in the 3-1 defeat to Llanfairpwll last Friday.

He’s a player with plenty of pace and a fantastic finish on him and will be a joy to watch for the Tyddyn Paun club this season.

Another one of tier five’s young stars who is tearing it up already during 21/22.

Finter was previously with Llangoed, playing for both the Reserves in the Anglesey League back in 2017/18 and the first team who he scored 3 goals for in 2019/20.

For a long time now, the 19-year-old has been regarded as one to keep an eye on and this season he is well and truly fulfilling that potential with Pwll.

He has scored 8 goals in just 7 matches in North Wales Coast West Division One and provided two assists. He even came back to haunt Llangoed last week with a double in his side’s 3-1 win over his former club.

A player who is bang in form and looks like being one of the league’s top players this season.

The most experienced player on this list and the one who has enjoyed the most success to date in his career also.

Gary Jo has won countless trophies over the years, with the likes of the formidable Morawelon and Caergybi who he recently returned to.

In 2017/18, he helped Cybi win the Megan Cup in their very first season as a team as he notched up a career-best 58 goals. To date, he has scored 218 goals in his career if you count the 9 he has netted so far this season.

Over the years, the 32-year-old has been known to have formed a brilliant partnership with close friend and fellow goal-getter Asa Thomas at various clubs. This season though, he’s building a new formidable pairing with exciting young forward Louis Chapman (mentioned further below).

Between them the pair have scored 28 goals and provided 12 assists already. Gary Jo has scored 9 in 10 appearances in all competitions and has provided 5 assists. He’s a forward who knows where to be in the right place at the right time to get himself goals and is probably the best penalty taker around at this level.

Club legend who returned to Stumdwy in the summer after a spell away.

Despite still only being 24 years old, attacker Parry can be regarded as a Llanystumdwy great. When he departed the club’s Dwyfor Park home in 2018/19, he had scored a very impressive 210 goals in 170 appearances over the years – undoubtedly making him one of the club’s greatest ever players.

After spells away with Porthmadog, Bangor 1876 and Nantlle Vale, where he continued to hit the back of the net, Parry is now back at Stumdwy and has scored 10 goals and provided 2 assists in just 6 league appearances, as well as another two goals in the FAW Welsh Cup.

That places this utter goal machine on 293 goals for his senior career. I am sure it won’t be long before he hits that ridiculous tally of 300 at such a young age either.

Talysarn’s 2019/20 Young Player of the Season has picked up where he left off that season.

The 20-year-old finished that campaign with 12 goals to his name and that helped the Celts onto finishing fifth in what was a very tough Gwynedd League.

This season, the young attacker has already notched up 14 goals, beating his tally from 19/20. 11 of those goals have come in 8 matches in the league – with 5 goals in a 9-0 drubbing of Bodorgan on the opening day of the 21/22 season setting him well on his way to enjoying a fine campaign.

Baum is certainly one to keep an eye on this season as the Celts look to take the title in tier five.

Leading the way this season is a young star who has been in unstoppable form for Dale Moffat’s Caergybi side.

20-year-old attacker Chapman has been nothing short of sensational for his side so far, scoring at least one goal in every game he’s played.

The exciting forward is actually playing in his first senior season in football. Louis, whose brothers Floyd, 21, and Jake, 18, also play for the club, last played football when he was 16/17 years old for junior sides.

However, the promising attacker was signed up by North Wales Coast West Division One outfit Cybi last year and hasn’t stopped scoring since.

He opened his competitive account for the club with a double in the 4-2 FAW Welsh Cup win over Cefni , before hitting all four goals in the 4-1 win over Mountain Rangers.

All in all, Louis has scored 12 goals and provided 7 assists in just 6 appearances in the league and has bagged a further 5 goals in the FAW Welsh Cup, as well as 1 in the FAW Amateur Trophy.

Is he Holyhead and indeed Anglesey’s next great goal machine?