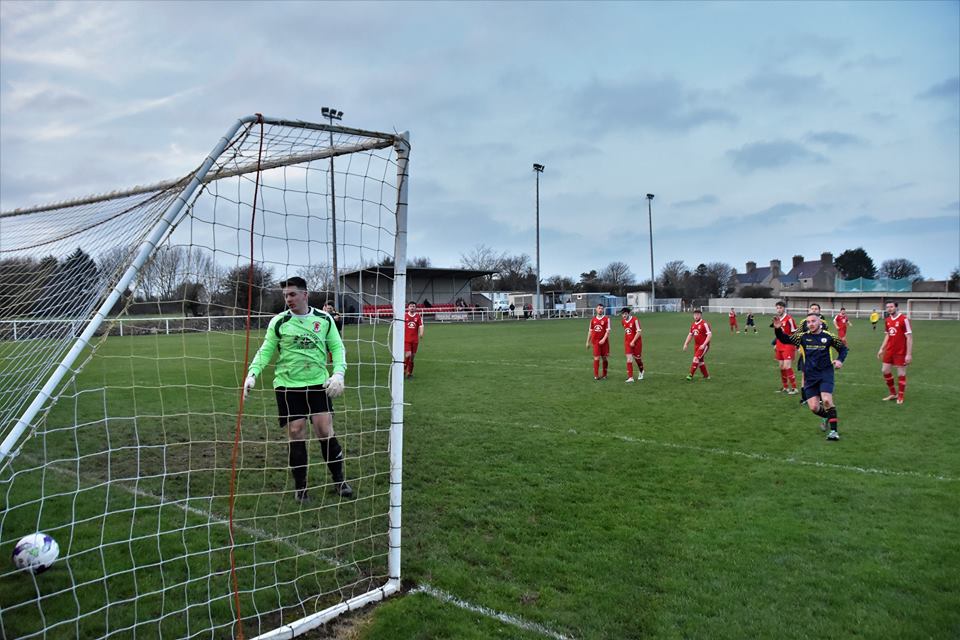 PICTURE by Wynne Evans shows Nik Kontodios’ free-kick end up in the back of the net for Bryngwran Bulls in their 4-2 win over Cemaes Bay.

Dale Moffat’s side booked their place in the semi finals of the prestigious Dargie Cup with a hard-fought victory over a well-organised Hotspur Reserves side.

Top-scorer James Ryan bagged his 34th of the season and the only goal of the game as Cybi took the spoils in this Holyhead derby.

Both sides stood strong defensively hence the unusually narrow scoreline but it was the home side who eventually progressed in the “cup that everyone wants to win”. 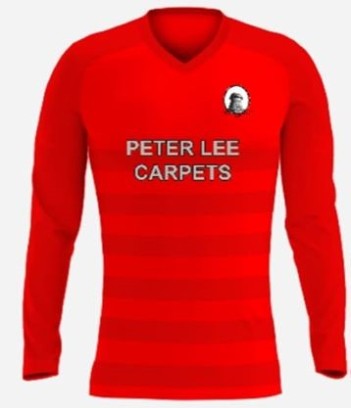 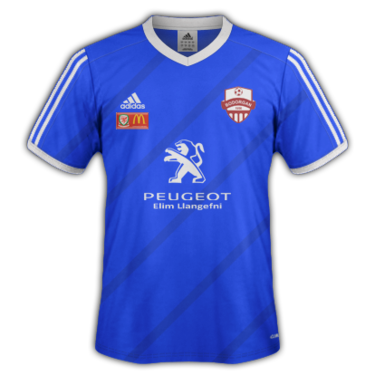 Llangefni-based Cefni also came away with a 1-0 win on Saturday afternoon in another tight affair.

Philip Davies’ goal in the opening 20 minutes of the game was enough for Peter Twigg’s side, who only formed over the summer months, to progress to their second semi finals as a team.

Bodorgan struggled to find a way back into the game despite changing their shape a little. Cefni went down to ten men with half an hour remaining, but defended bravely and smartly to keep the visitors at bay. 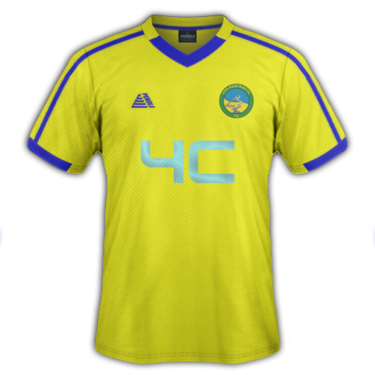 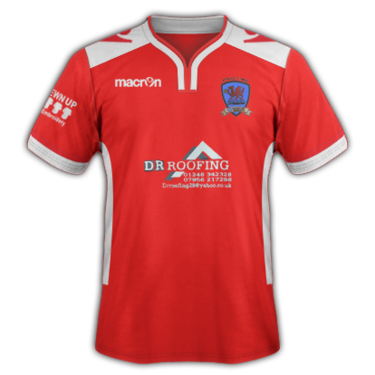 The biggest shock of them all came in this one as The Reserves stunned Arriva to complete the Dargie Cup’s final four.

In a feisty affair, the home side deservedly came out on top. Goals from Bradley Pickavance, Peter Crowe and Jack Halton were enough to cancel out strikes from Arriva’s top scorer Scott Hughes and Danny Camilleri.

Crowe was then sent off in the second half, but The Reserves defended well to book their place in the semi finals. Goalkeeper Lee Williams was Man of the Match for Pentraeth has he pulled off some fine saves to deny Arriva’s efforts.

With Llandegfan’s game against Llanfairpwll called off at the last minute (due to no ref being available to officiate), there was just the one game to talk about in the league.

Bryngwran opened up a six point lead over Caergybi on the Anglesey League table as they came away from Cemaes with three points intact.

Despite top scorer Craig Moore being out of action, the visitors still took complete control of the tie in the first half with a dominant display. Ioan Thomas opened the scoring, bagging his third goal in his last two games from close range. Then, after being fouled in the box, Jerome Sillence stepped up to convert a penalty (after The Bulls had incredibly missed their last six attempts from the spot!). Just after the half hour mark, birthday boy Matty Roberts put The Bulls in the driving seat, finishing well for 3-0.

It took until the hour mark for Cemaes to find a breakthrough – a huge clearance landing at the feet of top scorer Ryan Rowlands who found the net for the 18th time this season. Five minutes later though, it was 4 – Nik Kontodios finding the net with a stunning free-kick from 25 yards out. A Dafydd Jones penalty in the final minute made it 4-2 but it was all too little too late for the home team as Bryngwran claimed another scalp.

Gwalch continued their fine run of form with a crushing win over bottom-of-the-table Bont – although it did take until the second half for both sides to get going.

Mark Griffiths fired the visitors in front on 49mins before Ian Pleming equalised for Bont a few minutes  later. Prolific forward Griffiths put the Gwalchmai back in front once more in the hour mark.

A flurry of goal in the final 15 minutes from Gwion Thomas (75′), Paul Rowlands (80′) and John Jones (89′) completed the scoreline and bagged the visitors another vital three points in the title race as they look to catch Menai Tigers.

Bro’s miserable run of late continued as they slumped to a 4-0 defeat at home to an impressive Llangoed side.

After losing 5-3 to lowly Llanystumdwy last week, the home side may have thought that things couldn’t get much worse for them – but they certainly have done.

Goals from top scorer Carwyn Williams (21′) and Wayne Thomas (36′) put Llangoed in the driving seat before half time. Two more goals in the second half from Williams again (76′) and Llion Roberts (79′) put the final nails in the coffin for Bro.

The result moves Llangoed up to third in the league whilst Bro stay in fifth place.

It’s amazing how much confidence a win can give you isn’t it? Llanystumdwy waited all season before bagging their first three points of the 18/19 campaign last Saturday and now they have six and two consecutive wins after beating Mynydd.

The home side took complete control early on in this one, racing into a 3-0 lead before half time thanks to goals from Kyle Williams (25′) and Bradley Williams (30′, 37′). A late strike from Kyle Harbut was nothing but a mere consolation for Mynydd who now lie second to last in the table.

These two sides met for the second time in a week and once again it was The Tigers who took the victory and remain unbeaten.

Following their 4-3 win at Glantraeth last Saturday, Sean Brett’s side progressed to the next round of the cup thanks to yet another determined footballing display.

Defender Wisdom Janes put the home side ahead on 14 minutes before Sion Davies equalised for Galntraeth just after the half hour mark. 1-1 at half time and it was anyone’s guess as to who would win.

Unsurprisingly it was the league’s top scorer Dean Redmond who eventually made the difference once again. After bagging a hat-trick of penalties against them last Saturday, the lethal forward punished the visitors once more, bagging two to send his side into the next round. Glan’s Andy Clarke had pulled one back but The Tigers held out for the win.

Talysarn Celts will be joining Menai Bridge in the next round after claiming a narrow 2-1 win over Waunfawr.

Goals from David Jones (15′) and Jac Jones (40′) put the home side through with Waun’s Aled Pritchard goal on 75 minutes not quite enough for them to put up a real fight.

Either Nefyn United or Gwlachmai will join Bro Goronwy, Menai Bridge Tigers and Talysarn Celts in the next round after their game takes place on December 8.