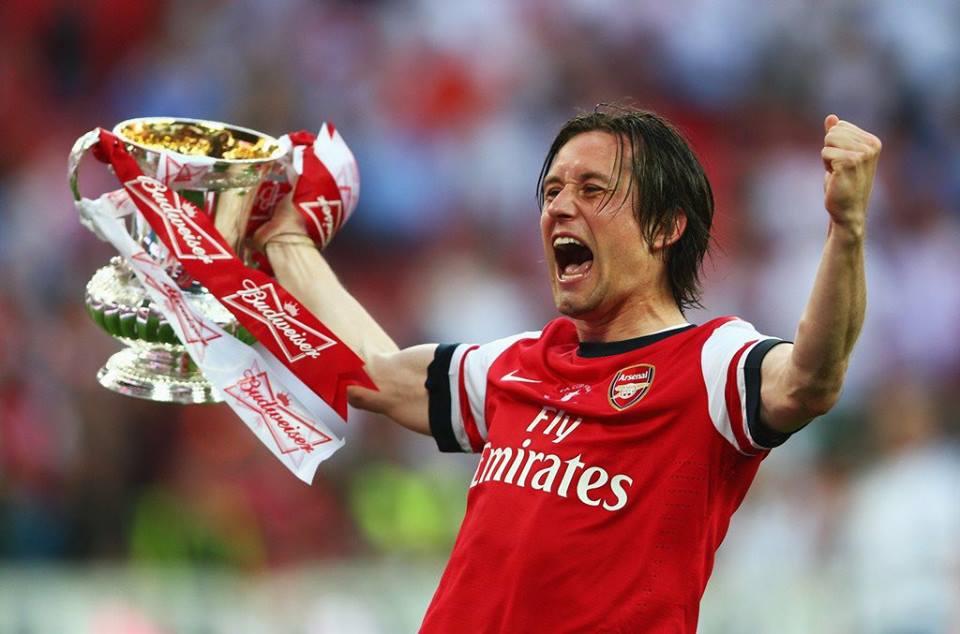 WHEN growing up watching football, there were many heroes that I idolised.

The likes of Thierry Henry, Dennis Bergkamp, Steven Gerrard and Alan Shearer were all players that I enjoyed watching.

One name that you might not expect to see on that list of individuals however is Tomas Rosicky.

The Czech midfielder, nicknamed “little Mozart” for his ability to “orchestrate” the match, announced his retirement from football this week after nearly 20 years in the game.

Where it all began for Rosicky …

The 37-year-old’s career, although hampered by several injuries in his later years, began so brightly back in his homeland when playing for Sparta Prague. In signing for the club, he followed in the footsteps of his father and brother, both named Jiri, who also played there.

Having previously played for Sparta’s youth teams, Tomas debuted for the senior team in 1998. After playing three matches in that season, he won the national title with Sparta.

In the following season (1999-2000), he began to make a name for himself, netting five goals and winning the league with Sparta once more. He was named the “Talent of the Year” at the 1999 Czech Footballer of the Year awards and comparisons were quickly drawn between him and Pavel Nedved, who was and still is regarded as the greatest Czech player of all time (alongside Petr Cech perhaps).

During the group stage in the 2000-2001 UEFA Champions League he scored goals in matches against Shakhtar Donetsk (Ukraine) and Arsenal (who he would later sign for). This attracted the attention of German giants Borussia Dortmund, who later had an £8m bid accepted for the player in January 2001.

Life in Germany – building his reputation

He signed a five-year contract at the Signal Iduna Park and became the most expensive player in Bundesliga history at the time, as well as the most expensive Czech player to be sold to a foreign team. He looked for all the world like he would become a true footballing legend.

In his first full season at Dortmund, Rosicky helped them win the 2001–02 Bundesliga title. He also took part in the 2002 UEFA Cup Final, which Dortmund ultimately lost 3–2 to Feyenoord.

During his first two-and-a-half seasons with the club, he was a main star in their starting eleven, playing 75 league matches, scoring nine goals and registering 20 assists.

March 2006 saw his injury problems begin with his thigh, but there were no real signs of worry for him and he went on to sign for Arsenal in May of the same year, as a 25-year-old who was in the prime stages of his career.

The midfielder scored his first goal for the Gunners on September 13, 2006 against Hamburg. On January 6, 2007, he scored twice against Liverpool at Anfield in the FA Cup, in a 3–1 victory. He finished his debut season at Arsenal having scored six goals in 37 appearances for the club in all competitions.

In January 2008, he sustained a tendon injury in an FA Cup match against Newcastle United, which resulted in him playing no more matches that season. In fact, many would argue that it was this incident that virtually ended the Czech’s chances of having a truly successful career.

He missed the whole of the 2008-09 season due to the injury and didn’t return to action until September 2009, scoring in a 4-2 loss at Manchester City.

Despite his struggles, Rosicky signed a new contract in January 2010, stating that the Emirates had “felt like home since I arrived here four years ago and I believe we’re on the verge of achieving something special together.”

After signing his new contract, the midfielder bounced back into action and he finished the season with a total of three goals in 33 appearances in all club competitions. In the following season, he stayed fit and managed 34 appearances.

However, the injuries refused to leave him alone as he sustained another one in Arsenal’s final match of the 2012 season, pulling a muscle in the game against West Bromwich Albion. At Euro 2012 when playing for his country, he picked up a serious Achilles tendon injury which kept him out of action until Christmas of that year.

He even managed to break his nose in two places whilst at Arsenal following a challenge from Aston Vila’s Gabby Agbonlahor, in which he required surgery afterwards.

There WERE many highlights for the midfielder during his time in North London however and despite the many injury struggles he had encountered during his stay, Arsenal and Arsene Wenger refused to give up on him.

He became a cult hero as he often scored against bitter rivals Tottenham Hotspur.

His first came in late February 2012, netting the third goal in a historic 5-2 win. Another came on January 2014, when he scored in a 2-0 FA Cup win,  winning the ball on the halfway line from Danny Rose before running to the goal and chipping the ball over Hugo Lloris. The finest of all however came at White Hart Lane in March 2014 – when he scored an unstoppable shot in Arsenal’s 1-0 derby win (see below).

Looking at it now, 2014 was Rosicky’s finest year at the club. In February, he scored what Arsene Wenger described as “one of the best goals” Arsenal had ever scored with a well worked team goal against Sunderland.

He concluded the season by winning his first trophy in English football, coming on as a substitute for Santi Cazorla for the second half of extra time in the 2014 FA Cup Final as Arsenal beat Hull City 3–2 at Wembley.

In August 2014, he began the 14-15 season with more silverware as he played the last 20 minutes in Arsenal’s 3-0 win over Manchester City in the FA Community Shield. In his first league start of the season, on December 26, Rosický scored Arsenal’s second goal in a 2–1 home win against QPR to round off a memorable year in his career.

The end of an era at Arsenal/return to Czech Republic

As his Arsenal career began to come to an end, there was still time for the Czech midfielder to add a few more memories to his basket.

In January 2015, he captained the Gunners to a 3-2 win at Brighton & Hove Albion in the FA Cup, where he scored a fine third goal of the game, assisted Mesut Ozil’s goal and was named Man of the Match. He finished the 2014-15 season with another FA Cup to his name, although he did not play in the final.

Having missed the first half of the 2015-16 campaign as a result of a serious knee injury, Rosický finally made his first appearance on 30 January in a FA Cup tie with Burnley. However, after the match, it was revealed that he suffered a thigh injury during the encounter, with the result being that he would spend at least another month on the side lines.

It was announced on the final day of the season that Rosicky would end his ten-year stay with Arsenal, and would leave upon the expiration of his contract in July 2016.

On May 15, he received a guard of honour after Arsenal’s 4–0 final day victory against Aston Villa, with a majority of the Arsenal squad wearing his ‘Rosický 7’ jersey to thank him for his contribution to the club over the decade he spent there.

In August 2016, Rosicky announced a return to boyhood club Sparta Prague in his homeland.

His debut couldn’t have gone any worse however. He played in the 2–2 draw with Mlada Boleslav and sustained an injury after just 19 minutes, ruling him out for the rest of the 2016-17 season.

Rosicky returned once more on September 10, 2017 and this time it couldn’t have gone any better as he scored the winning goal of the game against Karvina.

Retirement/summary of an up and down career

On December 20, it was announced that Tomas Rosicky would be retiring from football altogether, due to the fact that as he put it himself, he could “no longer prepare” his body for “what is required”.

When he looks back on his career, I am sure that he will have a lot of regrets and disappointments, especially when thinking of the several injuries he had to sustain along the way.

In my opinion though, he was a fantastic player on his day and I’m sure that many fans, in particular fans  in his homeland, would agree that he was one of the best technical players in the world and his ability to use the outside of his foot to shoot and pass was sensational.

With 105 international caps to his name, as well as some beautiful goals, three Czech Footballer of the Year awards and several trophies in the Czech Republic, Germany and England, it certainly hasn’t been a terrible career for him has it?

Rosicky is the utter epitome of “if at first you don’t succeed, try and try again” and is a perfect example of how even at the low points in life, you should never give up on your dreams.

Arsene Wenger once famously said: “If you love football, then you love Tomas Rosicky.” and I think it’s hard to argue with that.