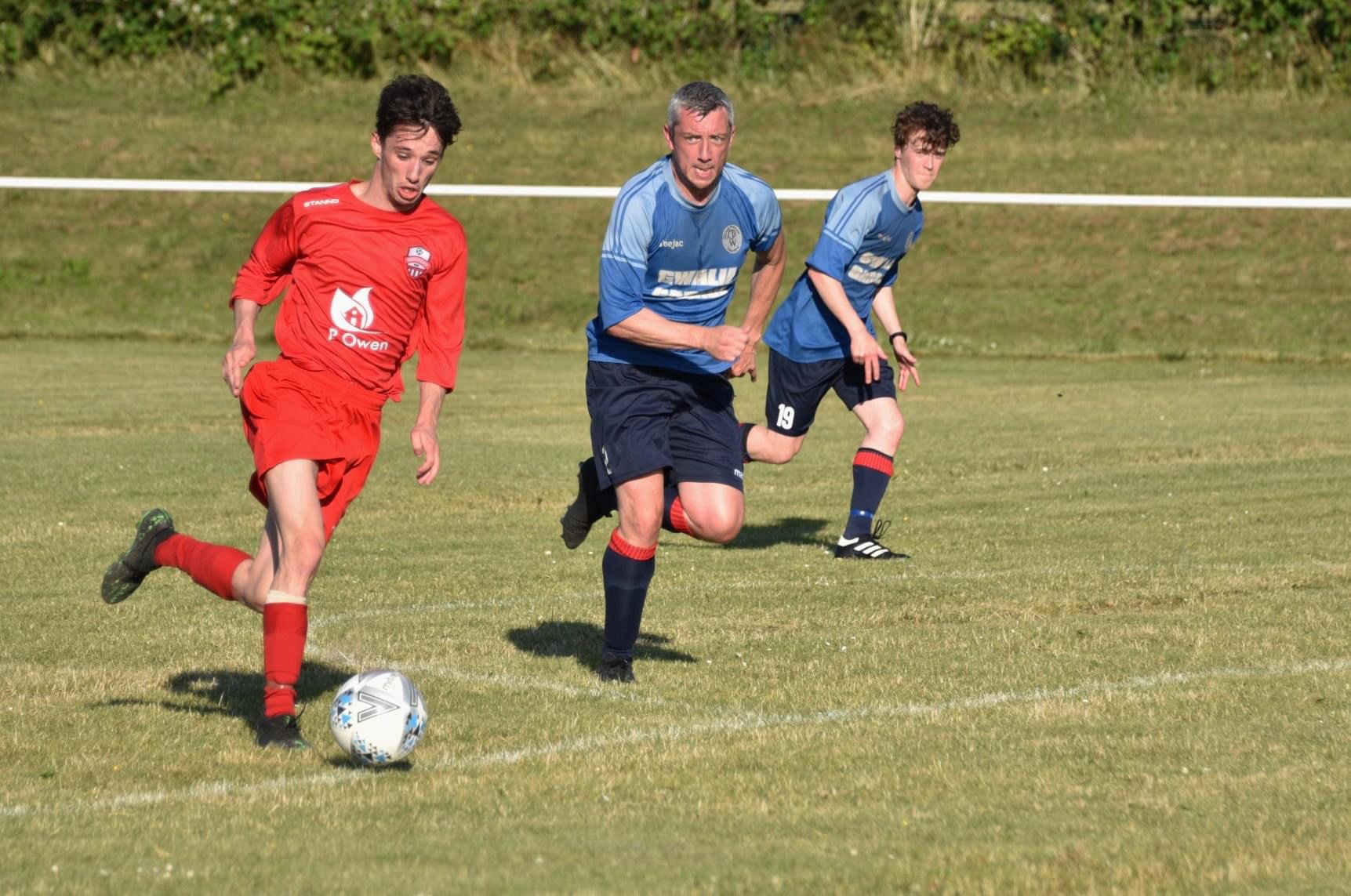 HERE at AFE we love bringing you the latest signing news as it happens.

There have been some fantastic moves in both the Eryri Consulting Ltd North Wales Coast West Premier and Division One leagues over the summer.

Here are some of the ones we haven’t yet mentioned on the blog, some of which made their respective league debuts for their new clubs last weekend!

Highly talented young midfielder who has already caught the eye for former clubs Gaerwen and Bontnewydd despite still being so young.

Following an impressive individual campaign with the latter in North Wales Coast West Division One in 21/22, McGrath has now made the step up to the Premier division with Llanberis.

The 18-year-old provided four goals and three assists in his 26 league appearances for Bont last season in what was his first senior campaign and has long been regarded as one to keep an eye on.

Another top signing made by Llanberis here.

Jones created plenty of problems for tier five defenders whilst with Waunfawr, who sadly folded over the summer.

The 27-year-old scored 22 goals in just 32 appearances for the club in a memorable season.

Now, having spent the last decade with the Beganifs, Jones is ready for a new challenge in tier four.

A player who has been fantastic for Bodorgan down the years in the Anglesey League and North Wales Coast West Division One.

Back when I first started covering local football in 2017, Gardiner was in inspired form as he helped take Bodorgan – another club which folded over the summer – to its one and only cup final. And he even scored in that Elias Cup final too, but Bod eventually lost to Arriva on penalties.

A tricky and direct player, the 24-year-old has also played for Bangor University in the past and will no doubt prove to be a useful player for Glan.

A young attacker who was brilliant for a struggling Y Fali side in North Wales Coast West Division One in 21/22.

His standout performance came when he netted a memorable hat-trick in an impressive 4-2 win over Waunfawr.

A pacy attacker with a great eye for goal, the 18-year-old is certainly one to keep an eye on in season’s to come.

Another former Beganifs man who is joining team-mate Jones at Llanberis this season.

And the reliable defender got off to a flying start with his new club as he scored their goal in the 1-1 draw v Aberffraw in the season opener.

A solid signing by Llanberis.

Another top signing here made by a Gwalch side who could very well be a surprise package in the Premier division this season.

Not only was Hughes number one for Llanerchymedd as they won the Division One title in 21/22, but he was also joint-top of the clean sheets like with 12 to his name.

The 33-year-old, who also previously played for Bodedern Athletic at Welsh Alliance level, brings with in plenty of experience and is undoubtedly one of the best shot-stoppers around at this level.

Another highly-experienced player who will no doubt be a cracking signing for Penrhyn.

35-year-old Daniels has played for the likes of Llanllyfni, Talysarn Celts, Llanberis and Nantlle Vale down the years, winning some silverware along the way too.

The defender/midfielder marked his debut for his new club with a goal in the 2-1 defeat to Gwalchmai on Saturday.

A player who looks like he could be a fantastic signing for Mynydd this season.

23-year-old Roberts has previously played for hometown club Pentraeth as high up as in the Welsh Alliance.

And that kind of experience showed immediately for his new side as he scored on his debut in a 5-3 defeat to Gwalchmai in the Welsh Cup.

Roberts, who is from the Isle of Man, then followed that up with a hat-trick in the 7-0 hammering of Amlwch Town days later.

He is a quick and direct attacking threat who will no doubt cause problems in tier four.

Another Roberts who should cause defenders some nightmares in the Premier division this season.

Shaun was quietly brilliant for Waunfawr last season as they finished 8th in Division One.

The 27-year-old attacker 11 league goals in 23 appearances along the way.

And he’s already off to a flier at Llanrug too, netting two goals in his first three matches so far.

A fantastic signing made by Gaerwen who marked his debut with two goals in a 6-4 defeat to Llanystumdwy on matchday one.

Owen, known as ‘Blacks’, has previously played as high up as the JD Cymru North (tier two) with Llangefni Town.

A great physical presence and a fine finisher, he should score plenty of goals in Division One – as he proved with a brace on his debut.

Back when I started covering local football, Williams was banging in the goals for Valley Athletic (now Y Fali), finishing the 2017/18 season with 36 goals and being one of the top scorers in the Anglesey League that season too.

After a season plagued by injuries whilst with Caergybi in 2018/19, Williams bounced back with Trearddur Bay Bulls in the Gwynedd League a season later with another 25 goals.

Now at Trearddur Bay, he got off to a flier on Saturday as he notched a brace on his debut in the 5-2 win over Llangoed. Brilliant player and one to keep an eye on this season for sure.

A player who has been a very reliable full-back for the now defunct Bro Goronwy down the years.

Jones signed with Cemaes Bay last season but only played a few matches in Division One.

Now, he signs on at Llangoed – where older brother Aled also plays – and will no doubt look to make that right back position his own.

A great goalkeeper signing made by the Busmen here.

The 32-year-old has already shown glimpses of his top reflexes in Arriva’s first three matches of this season, despite the club falling to three defeats so far.

One of the most underrated signings made by a Division One club over the summer in my opinion and a player that certainly deserves a mention.

Despite being just 24 years old himself, Calley-Thomas will be one of the more experienced players in the Bont side this season, given the youthfulness of Simon Jones’ team.

Last season, the midfielder made 25 Premier Division appearances for Llanrug United and has already proven key for Bont too.

A hat-trick in the 4-1 win over Arriva proved he has what it takes to be the driving force behind everything they do this season.

A man who has been a phenomenal servant to Llangoed down the years and proven to be a fantastic shot-stopper too.

He was number one for the Puffins when they won a memorable cup double back in 2016/17.

And Owen has already proven just what he can do for Pwll as he kept a clean sheet on his debut v Holyhead town (3-0) before saving a penalty in a. 4-2 win over former club Llangoed.

Top quality defender who arrives to bolster the ranks of Town who have recruited well over the summer.

Leach has spent the last few seasons with 21/22 Premier champions Bodedern Athletic, who he made 29 appearances for during that title-winning campaign.

One of the best finishers around on Anglesey, who has racked up over 200 career goals to date.

The 33-year-old forward has scored around 230 goals in a career which has seen him play for and win trophies with the likes of Morawelon, Gaerwen, Bodedern Athletic and Holyhead Town, playing as high up as the Welsh Alliance.

In the summer of 2021, Owen returned to Caergybi, the club he enjoyed his most prolific season to date with. He hit 58 goals in the 2017/18 for Dale Moffat’s side, in what was their first ever season as a club in the Anglesey League.

He finished last season with 19 goals in 20 appearances for Cybi.

He pretty much guarantees goals for Cemaes Bay who will no doubbe chasing the Division One title this season.

A proven goalscorer who has now returned to the game following some time out and already has two goals in as many matches for Arriva.

Down the years, the 34-year-old striker has banged in over 200 goals for the likes of Glantraeth, Beaumaris Town and Bethesda Athletic.

Clarke now returns to the Busmen who he has previously played for in the Anglesey League, scoring 19 goals over two separate spells in 17/18 and 19/20.

He’s clinical in front of goal and that will no doubt help Arriva as the season goes on.

Another Beganifs man who has moved on following the club’s demise.

Gwynedd has moved to Gaerwen alongside former manager Steve Hughes who has returned to playing for the Anglesey club.

The 36-year-old, instantly recognisable due to him wearing glasses on the field, has been a key figure for Waunfawr down the years.

When I first started covering local football in 2017, Mike was captain at Mynydd Tigers (who later went onto become Ogwen Tigers before folding in 2020).

That season, the centre back led a very young Tigers side to the Anglesey League title during an unforgettable campaign.

Now, having coached with Llangefni Town Reserves in 21/22, he’s a player-coach for the much-improved Bethesda Rovers and even made a return to the pitch for them this week in the win over Gaerwen.