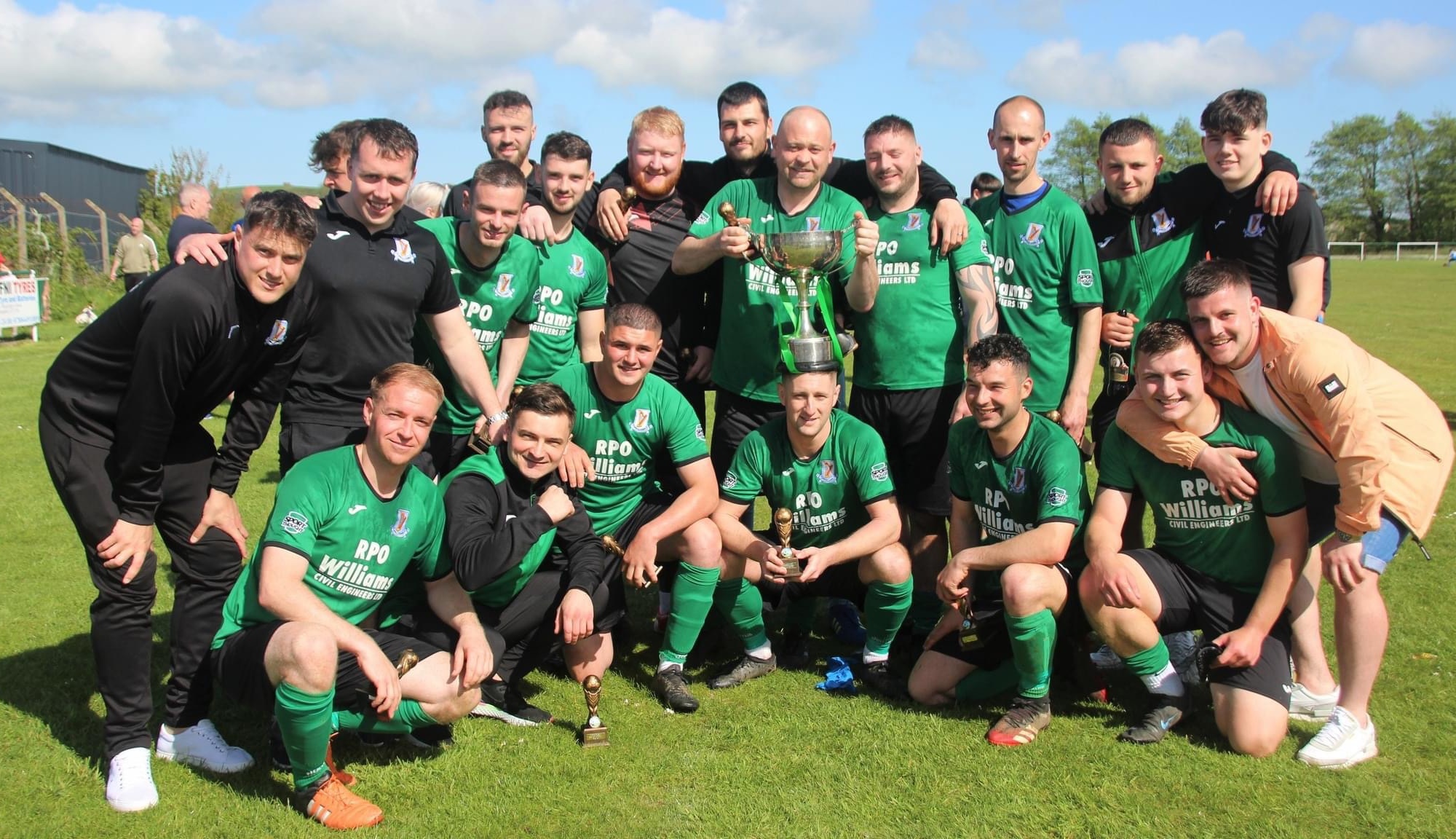 THE INAUGURAL North Wales Coast West Division One season may be coming to an end but the excitement is continuing to the very end.

On Saturday, the first-ever league champions Llanerchymedd welcomed second-placed Bethesda Athletic to Tan Parc, where the league title would be presented.

But the game was not without drama both on and off the ball.

A 1-1 draw with Talysarn Celts in midweek meant Medd avoided needing a result in this one v Athletic who were second in the league heading into the tie.

And it was just as well as Athletic ran out 3-1 winners – although the result might not stand given the fact that the match was abandoned on the hour-mark following an alleged fight.

The visitors took the lead when a deflected strike found its way in the outstretched leg of Gwion Owen just three minutes in.

Medd levelled just four minutes later however – top scorer Gwion Thomas converting his second penalty in a matter of days after Ricky Jones was brought down in the box.

However, Athletic were hungry for goals and found themselves 2-1 up when a defensive error allowed Scott Hughes into score on 16mins.

The home team then squandered chances through Thomas, Dan Evans and Chris Bennett with the latter’s shot going closest dipping just over the bar.

But it was the visitors who got the next goal to make it 3-1 just before the break. Attacking midfielder Joe Todd stepped up to convert a penalty – his 29th goal in 24 appearances this season.

In the second half, chances fell to both teams before some shoving and pushing ensued on the hour mark and a supporter allegedly ran onto to the pitch, giving the referee no choice but to abandon the game at that point.

After the match, the league title was presented to the well-deserved champions!

Elsewhere, bottom-of-the table Bethesda Rovers impressed as they held fourth placed Cemaes Bay to a 3-3 draw at home in their final match of what is their first season as a club.

With many ‘starting eleven’ players missing, Bay handed first starts to three young players on the day with 17-year-old Matthew Jones starting in goal, Ioan Tudor, 16, starting at left back and Jake Turnbull, 17, out on the right wing.

But you can take nothing away from Rovers’ performance as they were hungry from the off and were unlucky not to take all three points.

Osian Price’s long-range free kick found its way into the net to give them the lead 16 mins in before a powerful strike from Tom Davies made it 2-0 just five minutes later.

But, Bay fought back well firstly through a very neat finish from Josh Griffiths on 22mins and then through a poacher’s finish from the evergreen Andy Williams (31’).

In the second half, Bay midfielder Ryan Folksman was sent off for a second yellow card with 20mins to go before Rovers star Reece Williams’ shot found its way in under keeper Jones’ grasp on 76mins.

The home team looked for all the world like they were heading for all three points but Bay found the equaliser in stoppage time with Williams netting his second of the game by getting on the end of a corner.

Elsewhere, Llanfairpwll rescued a point late on against Waunfawr thanks to a goal from THEIR GOALKEEPER!

A goal from veteran midfielder Mark Williams, 39, gave the Beganifs a late lead on 70mins but up stepped goalkeeper Huw Shaw to convert an equaliser for Pwll with six minutes left on the clock.

That result means Waunfawr have finished in 8th place on 47pts and Llanfairpwll will either finish in 6th or 7th depending on what Llanystumdwy do in their final league game against Cefni on May 21.

Bontnewydd cruised to a 7-0 victory over Y Fali, who were down to 9 men by the end of the match at Cae Stanley.

In the second half, Cai Rhun Jones netted a second from the penalty spot (49’) before Wes Jones was dismissed for Y Fali on the hour mark.

Two minutes later, another teenager – 18-year-old Cai Rowlands – was on the scoresheet for Bont before Steffan Element, also 18, made it 6-0 seconds later.

Midfielder Liam Roberts then became the second Y Fali player to be sent off on 88mins before Cai Rhun Jones completed his hat-trick and the scoreline in stoppage time.

Caergybi came out 2-1 winners from their local derby with Holyhead Town at Millbank.

In what was their penultimate game of the season, Dale Moffat’s side found themselves 1-0 up at half time through a George Hibbert goal (35 mins), Myles Jones providing the assist.

But the Harbourmen drew level in the second half through promising young star Kaine Bentley who netted his 17th goal of the season on 66mins.

The eventual winner came just six minutes from time when Hibbert turned provider to set up Tom Scott for 2-1.

Finally, Cefni and Bodorgan played out a 2-2 in what was Bod manager John Webster’s last game in charge of the club.

Sam Hallas missed a penalty for Bod on the half-hour mark before Connor Rees found the net on 37mins to give them a 1-0 lead at the break.

Nathan Lewis was the eventual hero once more for Cefni as he rescued a point on 86mins with what was his 11th goals in 19 league outings this season.