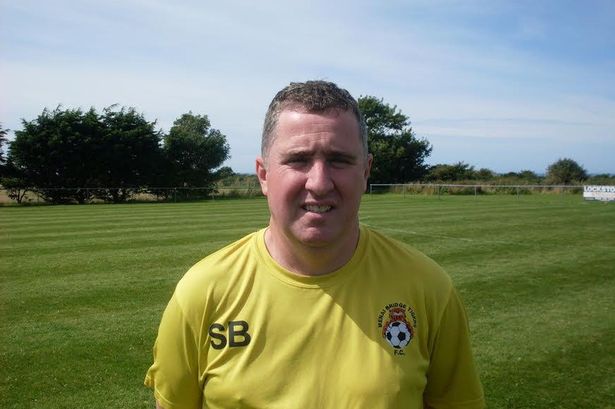 LIKE MANY others, AFE was saddened to hear of the passing of former football manager Sean Brett this morning.

The 50-year-old has been manager of the likes of Gaerwen, Glantraeth, and of course, Menai Tigers where he enjoyed considerable success and brought through many great young players down the years too – including former top-flight player Sam Jones who is now with Colwyn Bay.

Brett will undoubtedly be a familiar face to so many people within the Anglesey footballing scene, having spent around 25 years in the game as a manager.

As a player, he was a right back who turned out for the likes of Llandegfan (Anglesey League), the Castle and the Vic. He spent 14 years as a player manager in the Sunday League days also.

Brett also gave 12 years of his managerial career to taking charge of his son Noah’s junior sides – right through from Menai Bridge under 7’s to the under 16’s and also managed Anglesey juniors on a couple of occasions. In that role, he helped bring through some talented young players who, by now, are thriving at their respective clubs – including attacker Sam Jones who has gone on to play in the top-flight with Caernarfon Town.

However, he’s most well known for the time he spent with the Menai Tigers seniors side who first joined the Anglesey League more than a decade ago by now.

During Brett’s time with the club, they enjoyed many a great success including winning the Anglesey League, the Megan Cup twice, the Elias Cup, the IPP Cup and the Meditel Cup (x2), the league title and the Bob Owen memorial shield in the Gwynedd League.

The finest moment of course, although bittersweet, was when the Tigers won the Gwynedd League (above) and Meditel Cup double in 2018/19 – but were subsequently denied promotion to the Welsh Alliance on ground criteria.

He was most previously with Glantraeth and has also been at Gaerwen.

Brett looked back on his managerial career with fondness. He previously told AFE in an interview that he believed he felt he had ‘made more right decisions than wrong ones’ as a coach.

The amount of tributes that have been paid to him already today are a real testament to who he was both as a person and as a manger too.

A statement from long-term club Menai Tigers read: “We are devastated at the tragic passing of our friend and former manager Sean Brett on Saturday.

“The news has come as a huge shock to us all, and is difficult to process. Sean devoted 10 years to our senior side and 12 years to the junior section, and was an integral part of the club’s successes during his time with us. While Sean left the club in 2019, he still came to support regularly and was Tigers through and through.

“Sean will be sorely missed by the club, the town of Menai Bridge, and the wider local football community. We would like to express our heartfelt condolences to Nicola, Noah, Hope, and all Sean’s family and friends.”

Rest in peace Sean, you will be very sadly missed.