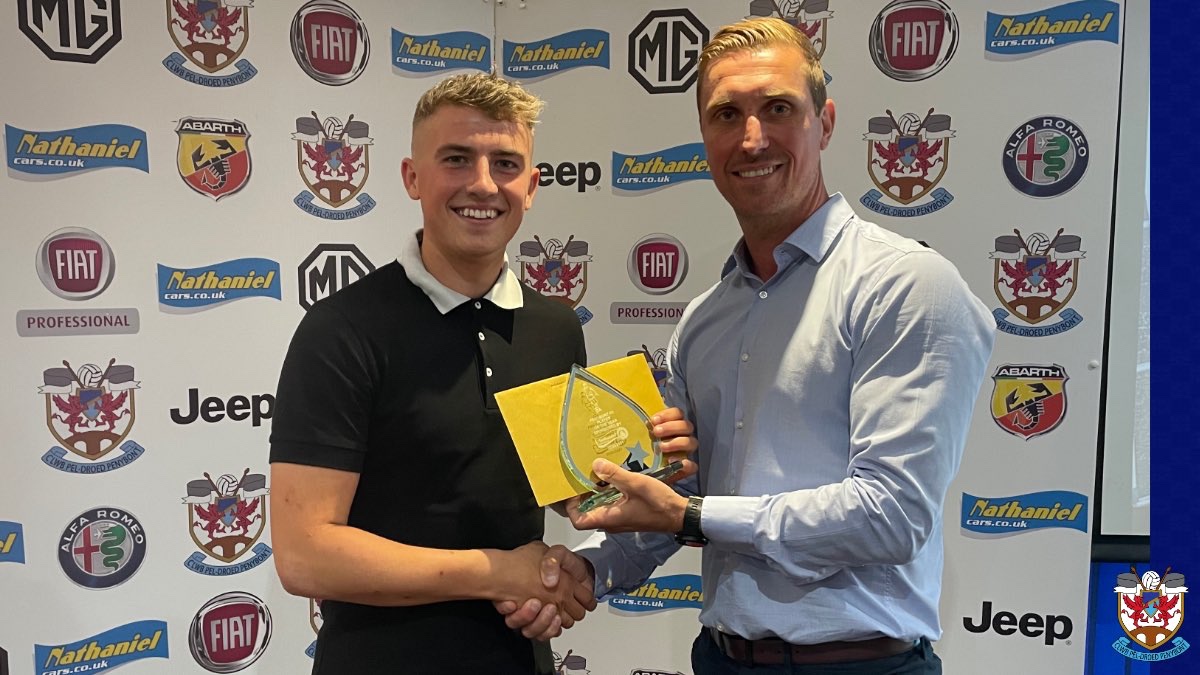 OVER THE past few years, Wales’ top-flight has certainly grown in both popularity and standard, in my opinion at least.

A number of former professional players have been/are now plying their trade in the JD Cymru Premier too – including ex-Wales internationals such as Dave Edwards (Bala Town) and Jazz Richards (Haverfordwest County).

As well as that though, there are a number of fantastic young players who have really caught the eye. Penybont’s Mael Davies is among the very best of them.

The 23-year-old full-back is a product of the Swansea City academy – and even signed a professional deal with the club. He was part of the U18’s and U23’s set-up and was handed the ‘Scholar of the Year’ award also.

In his recent interview with AFE, he said that it was Dan James (now with Leeds United) and Joe Rodon (now at Spurs) who really stood out for him the most during his days as team mates in the Swans Academy.

It is in the JD Cymru Premier that Davies has really gone on to establish himself as a player however, going on to become one of the best players in the top-flight at this moment in time.

The player, who can also play comfortably in midfield, first joined Carmarthen Town back in the 2018/19 season before transferring to Cardiff Met Uni the season after.

It was whilst with The Archers that he began to show what he could do both from a defensive and attacking perspective as he managed to pop up with 5 goals during that campaign.

That sort of form saw current club Penybont swoop into sign him ahead of the 2020/21 season and he immediately became a hit at the SDM Glass Stadium. His first season again saw him score 5 times in 30 outings for Bont who managed to make the JD Cymru Premier UEFA Europa Conference League play-offs where they lost out 1-0 to Newtown.

Talking about his time in the top-flight and with Penybont so far, Davies said: “It’s definitely helped me with confidence as well as playing regular games. I’ve developed a lot by playing senior football and learning how the Cymru Premier works. It’s a very competitive and physical league with a lot of quality players.

“I think the league has progressed massively in recent times. It’s an extremely tough league and a lot of ex-professional players are now coming to play in the league. It just shows how good and how competitive the Cymru Premier is. Any team can beat anyone on their day so you have to be at the top of your game every single week. It’s nice to see the Cymru premier starting to be heard a lot more and get the recognition it deserves.

“The highlight playing for Penybont so far for me was winning the Cymru Premier “Young Player Of The Season” after a very good season for me personally and also winning the Penybont Player of the Year at the end of the season.”

Penybont have had an unbelievable season during the 21/23 campaign so far. They are currently second in the league with just a few games to go before the ‘split’ takes place.

That has put the club in a very good position to go on and play European football for the first time in the club’s history.

In charge of the club’s destiny is Rhys Griffiths – a former top-flight attacker who is one of the highest-scoring players ever in the league with 271 goals to his name.

Whilst speaking to AFE, Davies was full of admiration for his manager. He said: “Working under Rhys is great. He’s such a professional person that it brings the best out of everyone and everyone wants to play under him. He works extremely hard on and off the field and that shows in our performances last season and so far this season.”

Talking about the club’s ambitions, Davies added: “On a personal level I want to keep my standards high and improve each year. As a club obviously the aim is Europe. I think we’re in the mix and in a good position to go for second place for an automatic European spot. We’re also still in the Welsh Cup which can lead to europe. So we’re going to push as hard as we can in the league and also go on to win the Welsh Cup.”

As Wales’ top-flight, the JD Cymru Premier does have a number of players who can speak Welsh. Mael himself is a first language Welsh speaker and says he tries to speak in Welsh as much as he can.

He added: “There are a couple of players that do speak Welsh in the squad and I know Rhys Griffiths is learning. I often use the language speaking with the Welsh-speaking referees during matches and also in post-match interviews with the Sgorio team. It’s my first language so I’m more comfortable using it so I try and use it as much as I can!”