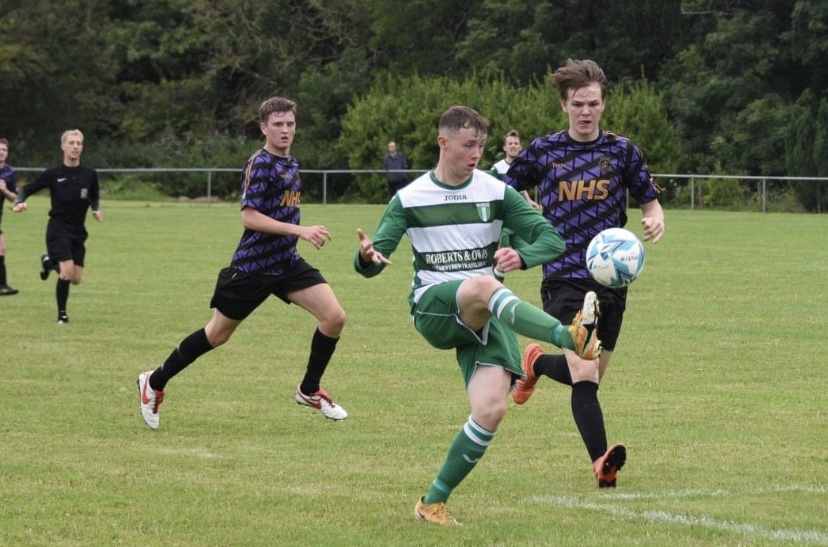 THE thrills of North Wales Coast West Division One continued with a host of great matches on Saturday afternoon (February 5).

Waunfawr pulled off what was arguably the biggest win of the day as they beat Llanerchymedd 3-2 away at Tan Parc – inflicting what is only Medd’s second league defeat of the season.

The home team were off to a flier just 3 minutes into the tie when Mark Jones netted his 11th goal of the season. But the Beganifs fought back well and found an equaliser on 40mins through the lively Shaun Roberts.

A Hywel Jones own goal gave Medd the lead again immediately after the restart but Roberts struck again with 13mins to go to make it 2-2. An afternoon to remember for the visitors was capped off when scorer Adam Lloyd Jones (below) netted a late winner on 89mins.

That was a result which moved Waunfawr up to 7th in the league table and, arguably, blows the Division One title race wide open.

That loss allowed Bethesda Athletic to open up a 3-point gap at the top of the table and in convincing fashion too as they beat Mountain Rangers 8-3.

The free-scoring Athletic side, who have now bagged 103 goals in 22 league matches, found themselves 5-0 up on 40minutes thanks to a goal each from brothers Noa, Osian and Dan Hughes and a Kyle Hartleb brace. Rangers showed great spirit to pull 2 goals back before half time however with top scorer Aled Rice and Dion Owen on the scoresheet.

16-year-old Noa Hughes bagged a brace to make it 6-2 on 48mins before completing his hat-trick 3 minutes later. Rice then pulled one back again for Rangers on 82mins before Daniel Hughes helped himself to brace right at the end.

With third-placed Cemaes Bay not playing this weekend, Talysarn Celts, in fourth, closed the gap on them to 2 points with a 6-0 victory at Llangoed.

Three goals in either half did the trick for the Celts with young star Luke Baum once again the star of the show, netting five of his side’s goals and taking his tally for the season to 28 goals in just 20 appearances. Rhodri Jones scored the other goal early on in the second half.

Caergybi continued their resurrection as they climbed up to 5th in the league with a 4-1 win away at Llanystumdwy.

The impressive Myles Jones put Cybi ahead just before the break. Tom Hadley doubled their advantage on the hour-mark before Tom Scott (78′) and Jones again (83′) made it a convincing victory. Stumdwy top scorer Sion Parry’s penalty late on was nothing but a consolation for his side.

Holyhead Town impressed once more as they made it 3 wins on the bounce in the most dramatic fashion at home to Llanfairpwll, who they previously beat 3-1 on the opening day of this season.

New signing Mike Williams opened his Harbourmen account just before the break to give them the lead. Pwll thought they’d found themselves an equaliser, and rightly so, in the 95th minute through Carwyn Roberts.

BUT there was still time for more drama to unfold as substitute Dan Lewis popped up with the winner just seconds later to move the ever-improving Town up into 12th in the table.