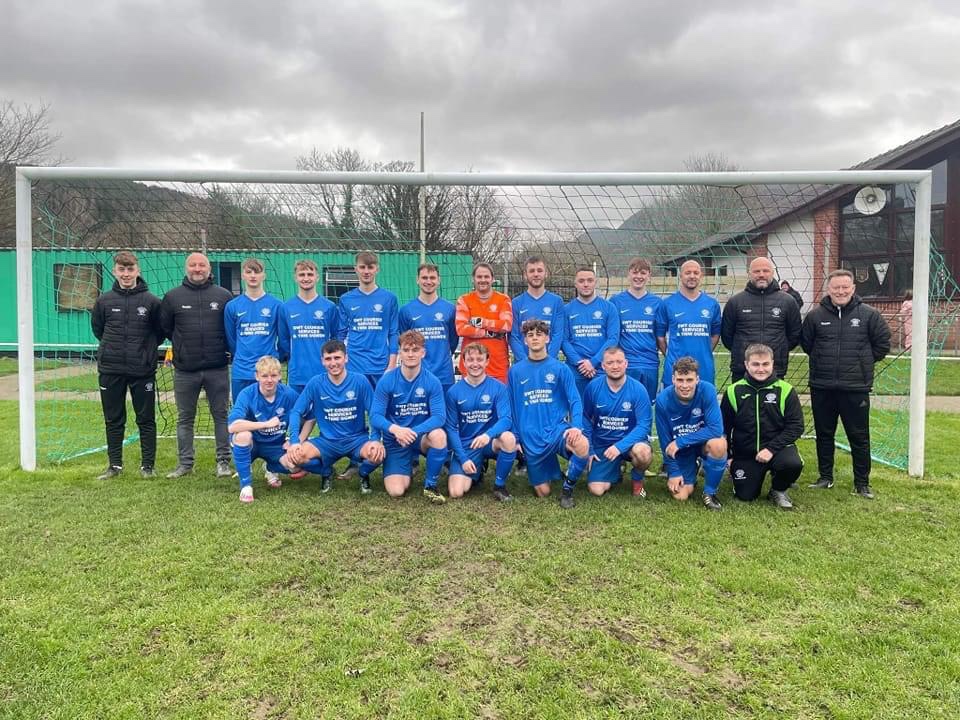 MARK HUGHES’ Bethesda Athletic side returned to the top of the North Wales Coast West Division One table as they put 10 goals past Llangoed.

Just a day after one Bethesda side – Rovers – lost 11-0 at dominant Cemaes Bay, their neighbours were on the winning side of a 10-0 victory away from home.

Incredibly, both teams went in to half time with a scoreline of 0-0 at Tyddyn Paun on Saturday afternoon. However, Athletic really took it up a gear or two in the second half.

Osian Hughes opened the scoring on 50mins before goals from Lewis Dixon (52’) and veteran Mike Lundstram (57’) arguably made it game over before the hour-mark.

But they weren’t done there, former Arriva Bangor goal machine Scott Hughes popped up with his 12th goal in just 9 league matches for Athletic on 63mins.

And the goals kept flowing as Joe Todd scored from the penalty spot for 5-0 on 65mins and Hughes hit his brace on 68mins.

Todd then scored another penalty (79’), before Dan Hughes scored just seconds later. Todd completed his hat-trick on 83mins before helping himself to a fourth goal two minutes from time.

Another emphatic win for Athletic saw them move top of the table on goal difference, having scored 95 goals in just 21 tier 5 matches so far this season.

As mentioned above, Cemaes Bay hammered Bethesda Rovers 11-0 under the School Lane lights on Friday night.

Darren Thomas’ side moved to the top of the tier 5 table temporarily with a huge margin of victory over the team at the bottom of the league.

Matt Reynolds was once again the hero for Cemaes as he netted FIVE goals to take his tally for the season to 25 goals in just 16 league matches.

The other Bay goals were scored by Matty Roberts (2), Dylan Jones (2), Sam Wiltshire and captain Keenan Downey. Full-back Sion Rowlands was a particular standout too as he grabbed 4 assists on the night.

Bay’s spell at the top of the pile was short-lived though as they moved back down to 3rd by Saturday evening after Athletic won and so did Llanerchymedd who beat Llanystumdwy 4-1 at Tan Parc.

That Medd victory moved them up to 2nd in the tier 5 table.

Meirion Grieves’ side were set on their way to 3pts early on when Llion Vaughan put them in front just 3 minutes in. But Stumdwy fought back well and were level through defender Gruff Sion who equalised on 23mins.

The home side were back in front before half time however as top scorer Gwion Thomas hit his 14th league goal of the season, with Ben Hughes providing the assist.

Thomas then turned provider for Gavin Sharpe who made it 3-2 to Medd on the hour-mark and the scoreline was settled on 67mins when Vaughan secured his brace.

Elsewhere, Cefni enjoyed a great 2-1 win over Llanfairpwll, who suffered a second-straight defeat for the first time since August.

Marky Holland put the visitors ahead on 23mins and they remained 1-0 up through to the break.

But Cefni came to life in the last 20mins with a Dion Parry goal (70’) and a brilliant free-kick from Nik Kontodios turning the game on its head and earning them a big 3pts.

The match ended in drama as 3 red cards were produced – 2 for Cefni (Henry Caldecott and Hugh Jones) and 1 for Llanfair (Marky Holland) but it was the Llangefni-based side who secured their 5th league victory.

The home side got off to a frustrating start with Luke Miles missing a penalty and Mike Murphy being sent off just after the half-hour mark. Ian Williams (below) then put Town in front before half time with his 7th league goal of the season.

The Harbourmen took full control of the game in the second half though as Ryan Heywood doubled their lead on 58mins and late goals from Luke Jones (84’), Aidan Batsford (85’) and a penalty from top scorer Kaine Bentley (88’) secured a brilliant win.

Caergybi got back to winning ways in style after two-straight defeats to beat Bontnewydd 4-1.

In what was a feisty encounter, Sion Thomas was sent off for Cybi just before half-time. Gary Jo Owen then scored to put them 1-0 up before Bont’s Cai Rhun Jones picked up a second yellow card and was dismissed to make it 10-men each for both sides.

In the second half, Cybi star man Louis Chapman doubled his side’s advantage before Alex Kalafusz scored from the penalty spot to pull one back for the visitors on 65mins.

Chapman then netted a penalty of his own 7mins later before Bryn Roberts completed the score line on 77mins.

Finally, Talysarn Celts kept the pressure on the top 3 as they beat Gwynedd rivals Waunfawr 6-2.

Jac Usher struck first for the Celts (12’) before Shaun Roberts equalised for the Beganifs (33’). But that lasted just minutes as an own goal restored the home side’s advantage on 37mins.

In the second half, Celts midfielder Jac Jones was at the double early on firstly through a penalty on 48mins and another goal on 52mins.

Iwan Bohana pulled another goal back for Waunfawr on 64mins before a goal from an unnamed scorer and Garem Jones made it 6-2 in the end.