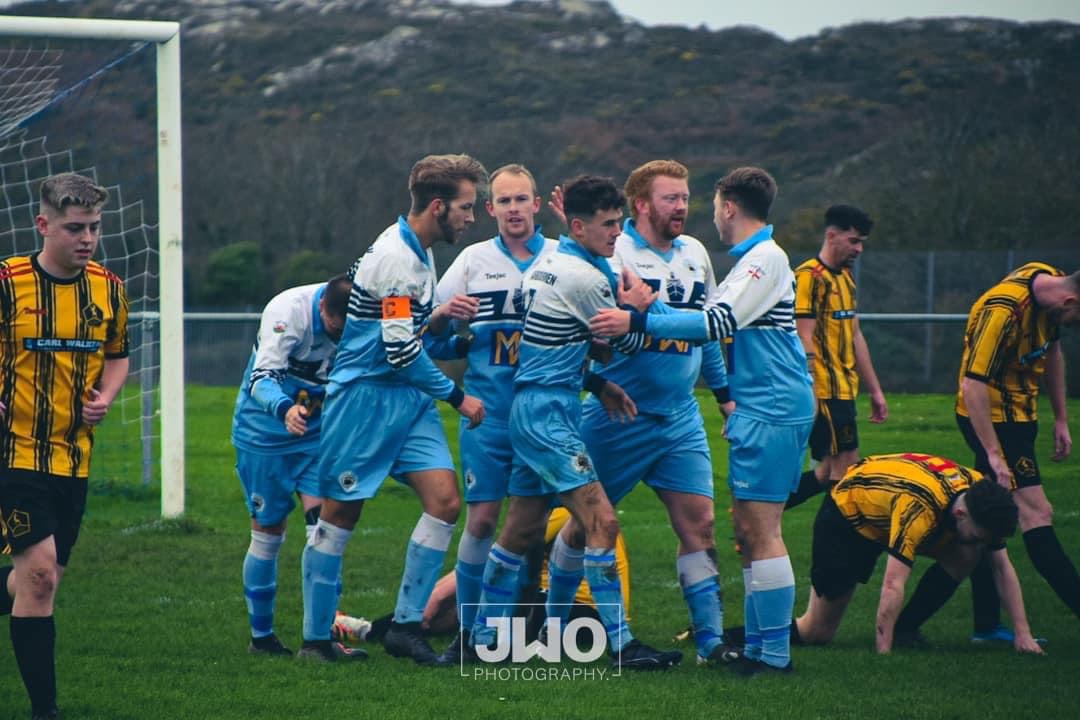 CEMAES BAY remain top of the North Wales Coast West Division One table at the end of this weekend – but Talysarn Celts are hot on their heels.

Darren Thomas’ Cemaes side made it 9 wins in a row with a 4-1 victory at Llanystumdwy – a win which means they are also unbeaten in 14.

A double from Sam Wiltshire and a Matty Reynolds goal put the visitors into a commanding 3-0 lead at the break.

Reynolds then made it 4-0 with his 16th league goal of the season on the hour mark before Stumdwy talisman Sion Parry, who came on as a substitute at half time, pulled one back on 70mins.

The scoreline remained the same for the last 20mins as Cemaes ensured that they stayed top of the table for now.

Meanwhile, Talysarn Celts moved on up into second in the table with a great 3-0 win over Llanfairpwll at Gloddfa Glai.

After failing to find the breakthrough in the first half, the home side came out hungry in the second and found an early goal through their 2019/20 Young Player of the Season Luke Baum.

It looked to be a very close encounter with very little to show between the two sides but The Celts managed to kill Pwll off in the last 10mins.

Baum struck a second (his 19th in all competitions this season) before Glyn Hughes Thomas made it three for all three points.

It was another impressive defensive display by The Celts who have picked up 6 clean sheets in all competitions this season.

It was a day to remember for Holyhead Town as, after 8 straight defeats stretching back to August, they finally picked up a win – beating Bethesda Rovers 5-1.

Coincidentally, The Harbourmen’s last win before that losing streak also came against Rovers in a game which ended 5-2 to Town.

In yesterday’s match, veteran forward Ian Williams fired the home side in front on 23mins before Andy Hill doubled the advantage some 10mins later. Rovers star Reece Williams then pulled one back before half time to set up a potentially nervy second half.

But that wasn’t the case as Town began to grow in confidence. It was 3-1 through 35-year-old Williams scoring again on 65mins before defender Ryan Heywood stretched the lead to three goals minutes later.

The game was done and dusted 9mins from time when Town top scorer Kaine Bentley netted his 8th goal of the season to secure a win which moves the club out of the bottom three and onto 10pts.

It was also a great day for Bodorgan who made it two league wins in a row with a 2-1 victory at a Mountain Rangers side who had won their last two matches themselves heading into the tie.

Connor Rees’ 9th minute strike was enough to put the visitors 1-0 up at the break.

However, Rangers began to fight back well in the second half and were rewarded for their efforts when, after Osian Evans was brought down in the box, striker Stuart Cooke stepped up to convert the penalty for 1-1.

But it was Bod who found themselves back in front on 70mins when a poor pass was intercepted by Keenan Latham who played a great ball in for Rees (below) to score his second goal and secure another big three points for the visitors.

The match between Waunfawr and Bethesda Athletic was called off after around half an hour or so after Waun goalkeeper Johnathan Gould suffered a seizure. Bethesda had been 1-0 up at that time through Noa Hughes.

AFE would like to wish Gould a speedy recovery!

Llanerchymedd’s home tie against Caergybi was called off due to a waterlogged pitch – much to the dismay and confusion of many who argued that the pitch seemed to look fine on social media. Referee Gareth Parry made the decision to call the game off on Saturday morning.

So, here’s how the standings looks following those results (games played in brackets) …