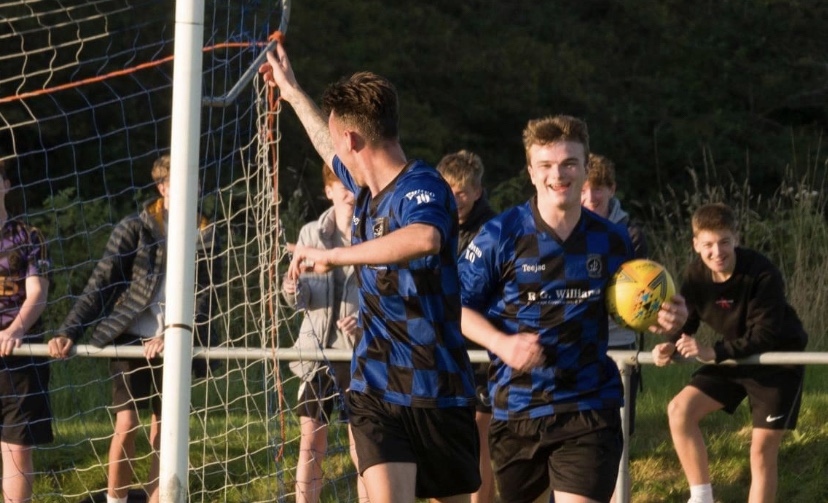 MATCHES like the local derby I witnessed last night really make me realise how much I and so many others have missed competitive football over the last year-and-a-half.

When Llanfairpwll and Llangoed met in North Wales Coast West Division One last Friday (August 20), both sides had battled well only for Pwll to take a 3-1 win back home with them.

That night, former Llangoed player Jay Finter provided a double alongside a Marky Holland strike. And these two would prove to be a thorn in Llangoed’s side once more in the return leg in a thriller at Maes Eilian last night.

In a closely-fought battle in the opening stages of the match, it was Llangoed who took the lead through club stalwart Wayne Thomas. The midfielder, who passed the 150-goal mark for the club in 2019/20, started the game brightly and brought team-mates into the game well with his composure and strength on the ball.

And his goal to give the visitors the lead was simply sensational. He struck a 25-yard free-kick ferociously into the top left corner, giving Llanfair keeper Huw Shaw no chance.

Llanfair began to grow into the game and some good chances were being created – with Callum Jones going close to a breakthrough. A quick double before the break eventually helped Llanfair turn the tie on its head.

Marky Holland hit his 6th goal of the season to bring Llanfair level before a mis-hit shot from the same player five minutes later found Finter unmarked at the back-post to finish right on the half time whistle.

A very entertaining first half but you just had the feeling that more goals were going to be scored in the second half – and that was the case as this derby proved to be one to remember.

Llanfair gave themselves a two-goal cushion just after the hour mark. Midfielder Gethin Williams getting in behind the Llangoed back line and finishing well into the bottom left. Appeals for a handball in the build-up were waved away by referee Rhys Parry.

You would have thought that Llangoed would have let their heads drop after that goal but in fact it was quite the opposite as David Thomas’ side clawed their way back into the tie superbly.

Their in-form attacker Anthony Williams (below) created space well for himself in the box and hammered home a well-hit shot to give the visitors hope on 70 minutes.

Llanfair then looked shaky after that goal and Llangoed were growing in confidence and so an equaliser seemed inevitable. And five minutes after their second, the visitors drew level.

A superb ball over the top was misjudged by the Llanfair back line and that allowed Williams in once more. The former Llandegfan controlled the ball down well and finished coolly to bag his ninth goals of the season and pull the score line back to 3-3.

I think many would agree that that would have probably been a fair result on the night given the effort from both teams up to that point. BUT Llanfair had other plans.

Another former Llangoed player – Nathaniel Evans – went close to making it 4-3 with his mis-hit shot going just over the bar.

With seconds left to play, substitute Sion Emlyn Davies, who just recently returned to Llanfair from Llangefni Town Reserves, found himself in acres of space down the right and ran the ball to the byline. He put a fantastic floated ball into the box and there was Finter to head home his 10th goal of the season against his former club.

Then came the wild scenes of celebration from the Llanfair players, coaching staff, subs and even supporters who had ran onto the pitch to in that moment of pure jubilation.

On the other hand it was heartbreak for Llangoed who battled so well and showed great character to come from 3-1 down also. A feisty affair which saw 8 yellow cards dished out between 2 clubs who were hungry for that win.

Llanfair look like a strong side under Gwyndaf Hughes and Danny Connolly and should finish high up the table this season. Holland and Finter now have 16 goals in their first 10 matches together and there are some quality players everywhere you look in that side from captain Dylan Williams at the back to talented young midfielder Adam Thomas and everywhere in between.

Elsewhere on Friday night, the impressive Bethesda Athletic claimed a massive 6-2 win at Bontnewydd to move up to 6th in the table.

Mark Hughes’ young side are another team who have really caught the eye with some free-scoring performances so far. With 37 goals in just 9 matches, they are the league’s highest scoring team at this moment in time.

Last night, Gari Owen fired Bont in front after 20mins but the lead lasted just four minutes before Joseph Todd equalised for the visitors. Tom Hughes and Noa Hughes (below) added one apiece before half time to make it 3-1 Pesda at the break.

Noa then scored again, his third in 2 matches since turning 16 years old last week, before an Osian McGuinness penalty gave the home side a glimmer of hope.

Bethesda kept pushing though and found themselves two more goals in the last 10 minutes through Todd again and Kyle Hartleb who is now on 6 goals for the season.

Another fine win for Bethesda Athletic who look like being a team mate who can cause problems for a lot of teams this season.