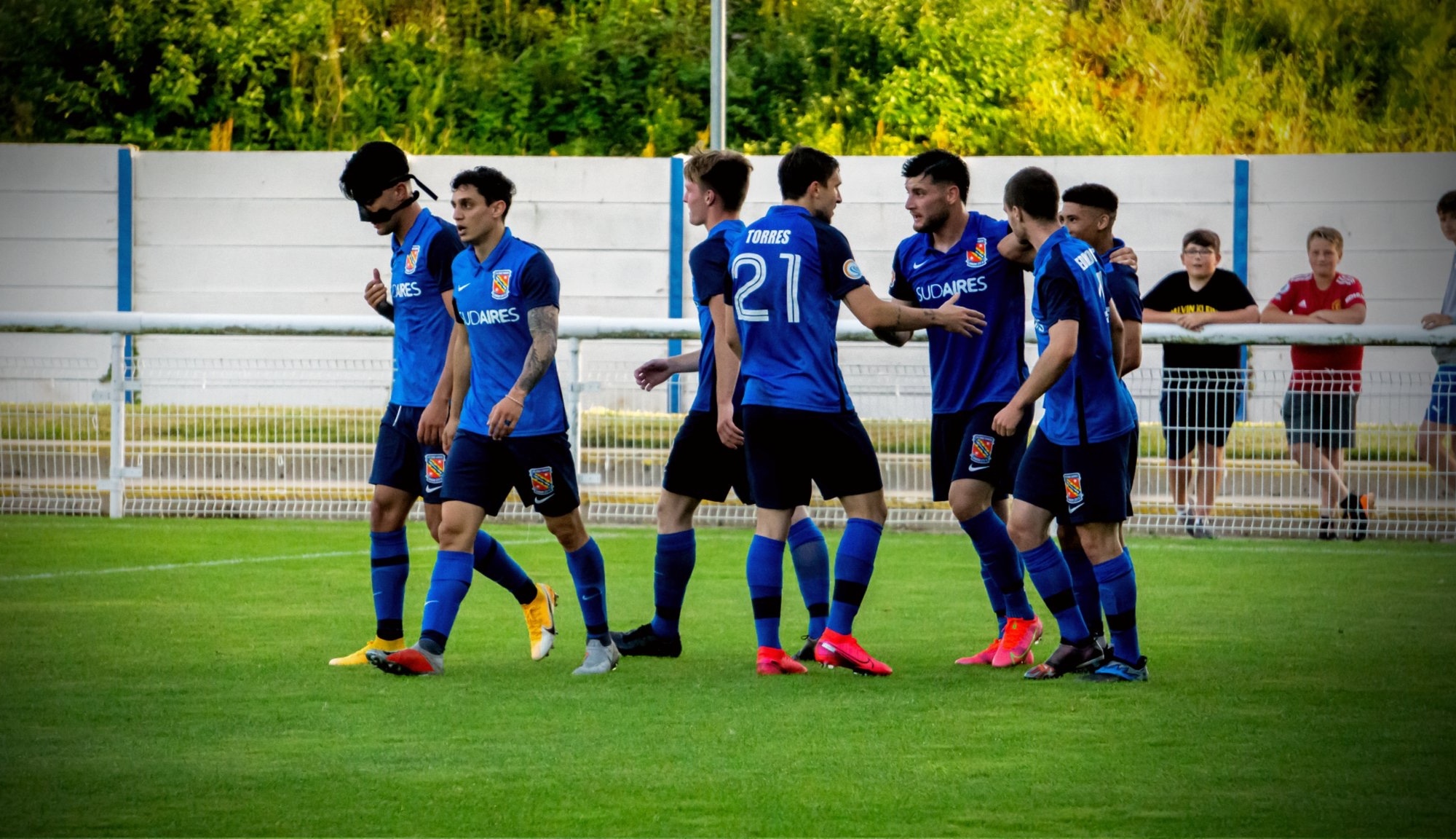 BANGOR CITY moved up into the top 5 in the JD Cymru North table following their 3-1 victory over against Holyhead Hotspur at Nantporth on Friday night.

Goals from Taylor Thain and Alex Boss (x2) sealed the victory for the Citizens in a much-improved display compared to their previous outing against Guilsfield, which resulted in a 4-2 loss to the current league leaders.

The game between the two local rivals on Friday night started slowly with both sides trying to cancel each other out. The first opportunity came just past the 5-minute mark, but Joshua Swindell’s curling effort was well saved by Holyhead goalkeeper Paul Pritchard.

The visitors themselves had a good opportunity in the 10th minute, with Liam Morris’ powerful effort from the left stopped brilliantly stopped by City shot-stopper Lewis Brass. City knew they had to react well following their ill-disciplined defeat at the weekend and looked much sharper and organised in their play.

Cai La Trobe-Roberts was causing the Holyhead defence some issues with his positioning and often got in behind them, working ‘keeper Pritchard throughout. However, Hotspur looked dangerous when attacking and Morris came close once again just past the 20th minute; Mel McGinness rolled the ball to his fellow Island Games winner, his strike was awkward for Brass, but the keeer saved well with his feet despite diving to his left.

Set pieces proved to be a problem for Bangor to defend, with Alex Jones coming close to nodding the visitors in front, though, Ryan Evans defended well to deflect his effort from going in. It did feel Holyhead were coming closer to scoring and in the 35th minute they did just that. Morris was once again involved as he was found down the left-hand side, drove towards goal and slotted the ball into the bottom right corner to give the Holy Islanders the lead. The Citizens must’ve felt disappointed in letting the visitors dominate large parts of the first half, knowing they had the quality and chances to go in front long before Holyhead’s opening goal.

However, the goal woke City up and they suddenly then looked much better and sharper. Giácomo Mello was dazzling around the Holyhead midfield and nearly equalised two minutes after going behind, but his curling effort went just wide of the mark. City got themselves back into the game in the 39th minute through Taylor Thain. Captain Federico Tobler fizzed an excellent ball into the path of Thain, who glanced at Pritchard before calmly slotting the ball into the back of the net.

The goal lifted the spirit of the crowd and players, and five minutes later the home side took the lead. Tyler Garratt smashed the ball up the pitch to clear his lines, but his clearance turned into an exceptional through ball as it found Alex Boss through on goal, who used the bounce to his advantage and lobbed goalkeeper Pritchard with the inside of his boot and bounced into the back of the net. This was fully deserved given their reaction to going a goal behind. You could sense City were shifting up the gears rapidly and it would appear the visitors were in for a long second half.

Despite their explosive end to the first half, the hosts struggled to gather the same momentum and struggled with their build-up play and finishing in the final third. However, Hotspur failed to capitalise on this as they themselves could not get a grip hold of the game, with Morris and McGinness given no service up front.

Consequently, City went on to extend their lead in the 56th minute through a well worked goal. La Trobe-Roberts played Thain down the right-hand side, the Scot played an excellent cross across the six-yard box for Boss, who only had to tap the ball into the back of the net from close range. It was a perfectly executed goal from three of City’s best players on the night. Credit must go to Thain who was outstanding in all areas from his game, whether it was his passing, finishing, work rate or positioning, he was everywhere for the Citizens and has a very bright future ahead in the game I’m sure.

The goal seemed to kill the game off for the visitors, though, in the 70th minute they had a great opportunity to get back into the game. McGinness laid the ball off to Harry Lewis on the edge of the penalty box, his first-time effort was mis-hit, but City keeper Brass was scrambling across his goal line and the ball hit the post. It was a massive let off for the hosts as a goal at this stage would have made for a tense 20-minute ending.

After this, Hotspur struggled to create more opportunities as Bangor kept the ball well and managed the game excellently. La Trobe-Roberts came close to adding a 4th for Bangor but struck the post from 10-yards out following an excellent ball down the left from Garratt. The visitors’ evening got from bad to worse in the 90th minute, as summer recruit Steffan Bulkeley was given a straight red card for a reckless challenge on Citizen Eridion Dida. Bulkeley can have no complaints given the force he went into the challenge, and what is more disappointing is that he was only on the pitch for seven minutes after replacing McGinness.

Referee Iwan Griffith blew the final whistle to a roar of cheer from the home crowd, who were delighted that their side had produced a convincing display and got back on track in their pursuit of promotion from tier two to the JD Cymru Premier.

The Citizens will look to build on their victory on Tuesday night when they travel down to mid-Wales to face Llanrhaeadr Ym Mochnant. For Holyhead, they will attempt to get back on track when they’ll travel to Halkyn Road to face out-of-form Holywell Town next Saturday.