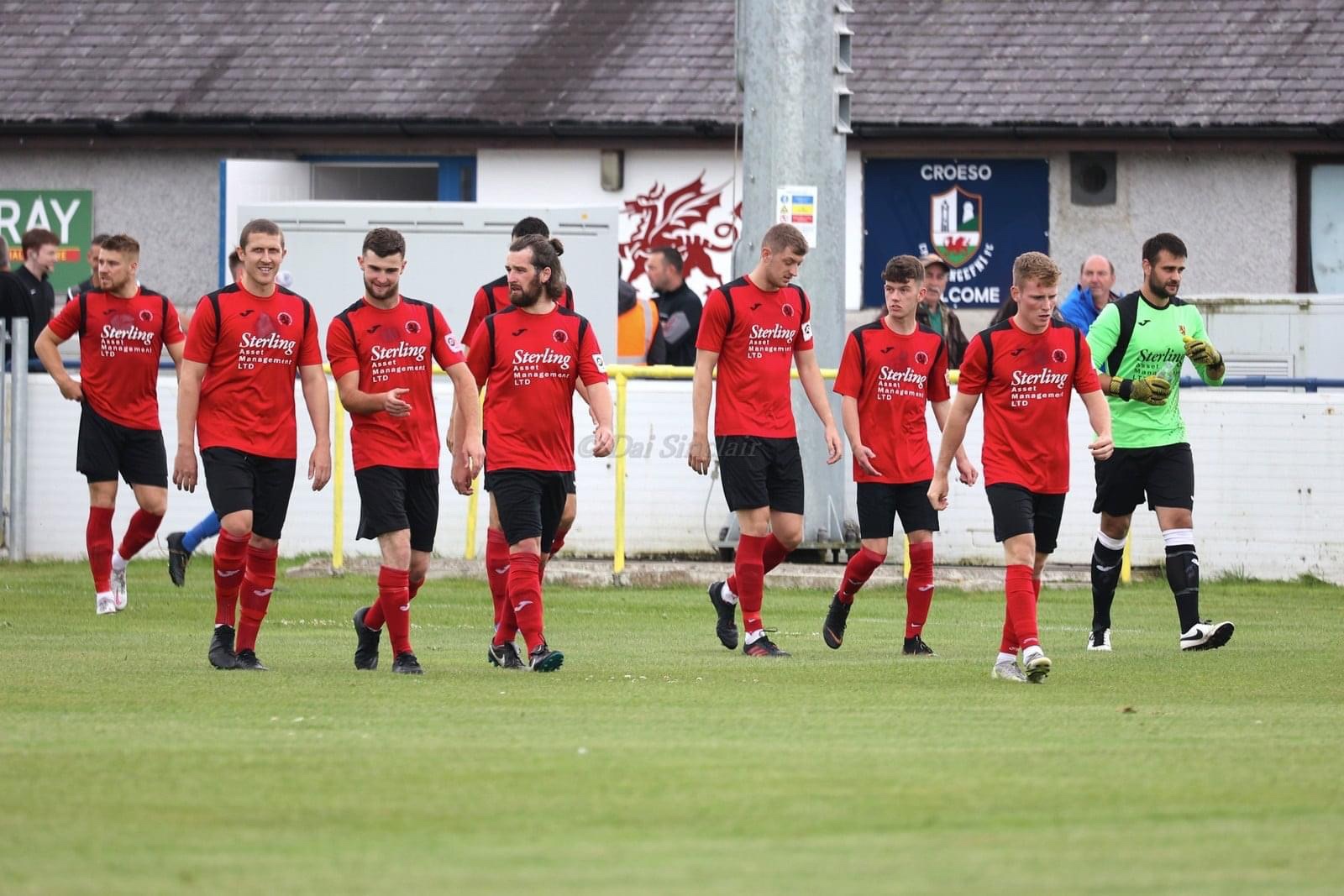 PICTURE by Dai Sinclair shows the Penrhyncoch side who picked up a massive 5-1 win at Llangefni Town on Saturday.

Llangefni’s miserable start to the JD Cymru North continued as they were out classed by a sharp looking Penrhyncoch side.

Goals from Steffan Gittins, Jonathan Foligno and Garmon Nutting proved to be the home side’s downfall in a 5-1 loss at Cae Bob Parry on Saturday afternoon.

Both sides started the game well and were on the front foot. However, the away side made the early breakthrough in just the fourth minute. A great ball over the top put talented winger Gittins in on goal, he saw goalkeeper Gerallt Jones off his line and dinked him, with the ball finding its way into the goal at a slow pace.

But, despite the early goal the home side didn’t let it affect them, as they created a few openings themselves down the wing. Their first big opportunity came just past the 15th minute; Dion Owen put in a dangerous corner that was awkward for the Penrhyn defence, the ball eventually found Alun Roberts who was in acres of space, but he mistimed his jump and connected with the ball badly. A golden opportunity for Cefni which proved to be costly as a leveller at that stage would have changed the dynamic of the game.

Ex-Bangor 1876 starlet Dylan Summers-Jones and winger Steffan Jones proved to be Llangefni’s biggest threat going forward, with their pace and technical abilities causing problems for both Penrhyn full backs. But, after a cagey 20-minute period, Penrhyncoch were awarded a penalty. Tomos Evans played an exquisite ball down the right to Ifan Burrel, who’s cross connected with the hand of a Cefni full back. Referee Mark Petch felt that his arm wasn’t in a natural position and ultimately gave a spot kick. Gittins stepped up but his effort was saved to the left by stand-in keeper Jones, who was replacing the injured Steve Sinclair. However, the rebound was converted by the same player to make it 2-0 to the Roosters.

Llangefni were clearly devastated as they felt that it should never have been a penalty. Ultimately, this cost them as their heads dropped, with the next 10 minutes proving to be absolute carnage.

Immediately after the second goal, the away side won a free kick just passed the halfway line, Gittins played an excellent ball right on the money for Jonathan Foligno, who directed his header into the opposite corner, leaving the goalkeeper standing with no chance of saving it. 2 goals within a minute were a real sucker punch for Cefni, who had fought so hard to stay in the game and started to look more dangerous before the penalty incident.

But the goals were starting to fly in for the away side now and it was 4-0 by the 40th minute, with Gittins completing a hat-trick. His third was probably one of the best headed goals to have been scored in the JD Cymru North, as his 25-yard effort caught the ‘keeper off his line, bouncing just under the bar. The ex-Aberystwyth Town youth looked like the real deal as Llangefni simply couldn’t cope with his skill and precision.

And Penrhyncoch weren’t done there either – as in the 43rd minute they made it 5-0. Garmon Nutting picked up the ball in the middle of Cefni’s half, drove forward and bulleted the ball into the top left corner, once again giving ‘keeper Jones no chance of saving it.

Llangefni knew they were playing for pride in the second half, and the half-time arrival of experienced Iwan Jones made the home side look a lot more composed as they were given an additional goal threat. Despite an encouraging start to the second half by the home side, Penrhyncoch still looked the most threatening in front of goal and had a great opportunity for a sixth in the 65th minute, but Tomos Evans’ low drive was well saved by Jones.

Llangefni’s day got from bad to worse as one of their star players appeared to pick up quite a serious injury. Steffan Jones initially won a free kick after being fouled by Gittins, however, he looked in excruciating pain straight away, clutching onto his right knee. This will come as a big blow for Chris Roberts’ side, as he looked one of Llangefni’s brightest players throughout his 70-minute period on the pitch.

It appeared that Llangefni were desperate for Petch to blow the final whistle, as the Roosters continued to pursue a sixth goal, with Burrel and substitute Cledan Davies combing well together and creating a few chances. Davies, who played for Aberystwyth Town for a combined 7 seasons, showed his class when coming on, ensuring that the Roosters were seeing the game out well in addition to continuing to create good opportunities.

Cefni started to look more dangerous in front of goal in the final ten minutes and their persistence was rewarded in the 87th minute. Gari Owen battled well down the right and found 17-year-old Jack Smith in acres of space on the edge of the penalty area, he glanced up to see where the keeper was and perfectly executed his shot by placing the ball into the top left corner, to inject some pride into Cefni’s performance.

A minute later they nearly clawed another back, but Owen’s dangerous ball across goal was not connected by neither Summers-Jones nor the Penrhyncoch defenders. Both Penrhyn’s centre backs Jonathan Foligno and Tihomir Trifonov must be credited for keeping Llangefni at bay for the majority of the game, as they never looked like giving the home side an opening throughout the 90 minutes.

Despite their best efforts in the second half the home side were glad to hear the final whistle after a dismal afternoon at Cae Bob Parry.

Llangefni will need to start winning games soon if they are to survive another season in the JD Cymru North, and perhaps a local derby against Holyhead Hotspurs may be the trick for them to up their game. That is their next match on August 10 (7:30 PM kick off). For Aneurin Thomas’s Penrhyncoch side, they will face the enormous task of overcoming TNS in the next round of the Nathaniel MG Cup next Saturday.