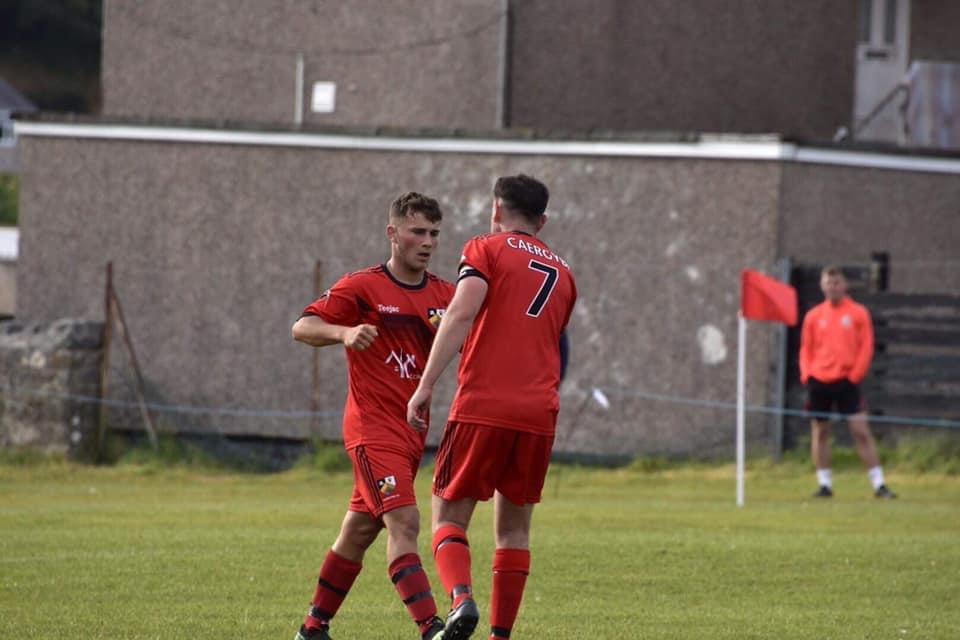 PICTURE by Trevor Owen shows Chapman on the left.

I’M KICKING off this new series with a player who has really taken North Wales Coast West Division One by storm already this season.

20-year-old attacker Louis Chapman has been nothing short of sensational for tier five club Caergybi so far, scoring at least one goal in every game he’s played.

The exciting forward is actually playing in his first senior season in football. Louis, whose brothers Floyd, 21, and Jake, 18, also play for the club, last played football when he was 16/17 years old for junior sides.

However, the promising attacker (below) was signed up by North Wales Coast West Division One outfit Cybi last year and hasn’t stopped scoring since.

Scoring in friendlies is one thing, scoring in competitive games is another thing entirely of course but Chapman has already shown he has what it takes to be Dale Moffat’s side’s main man during the 21/22 season.

Having played for several local clubs at junior level, as well as the Ynys Môn junior sides, Chapman has now come flying out of the blocks in senior football, scoring 12 goals in just 6 matches for Caergybi so far.

He opened his competitive account for the club with a double in the 4-2 FAW Welsh Cup win over Cefni , before hitting all four goals in the 4-1 win over Mountain Rangers.

He was then on the scoresheet again in Cybi’s heavy 5-1 defeat to tier four side Aberffraw in the FAW Amateur Trophy before a hat-trick against Llangoed in the Welsh Cup second round followed in a 5-0 win.

Louis (below) then scored in the 3-2 win over Cefni before netting his 12th in a 1-1 draw at Talysarn Celts this afternoon.

Described by several team mates as ‘fearless’, he certainly looks like he could be one of tier five’s hidden gems this season as he’s already proving to be a real threat to defenders.

A naturally gifted finisher – will he go on to finish as the league’s top scorer come the end of the season?

One thing is for certain – he seems to be Holyhead’s next rising star in the local footballing world.