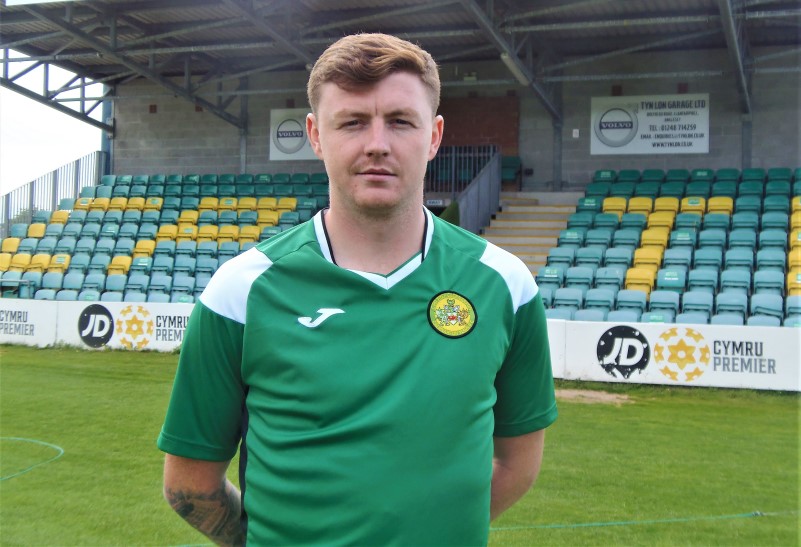 ONE of the greatest products of football on Anglesey in recent times has returned to former club Caernarfon Town FC.

At the age of 16, the energetic full-back began his career in senior football with home village club Bodedern Athletic – who he recently played in friendlies for for match fitness.

Now 27 years old, Donohue then went on to spend six years in the Everton academy before also representing local clubs Holyhead Hotspur, Porthmadog and Caernarfon Town, with whom he landed a treble of Welsh Alliance title, Cookson Cup and FAW Trophy under Lee Dixon in 2012/13.

He then signed for English Non-League side Sutton Coldfield Town in 2014, guiding them to promotion from the Evo-Stik Northern Premier Division 1 South.

His performances earned him a trial with Chesterfield in 2015 and went on to feature in 56 games for the club and was even named Players’ Player of the Year at the end of the 2016/17 campaign.

He signed for Portsmouth in August 2017, before also going on to play for Mansfield Town, Swindon Town and Barrow.

All in all, Donohue has amassed more than 100 appearances in the English Football League, including four campaigns at the third level of English football.

In further great news for Caernarfon Town FC this week, much-loved midfielder Danny Gosset has also put pen to paper ahead of the 21/22 top-flight season.

A household name in Welsh football by now, the 26-year-old, who is from Y Felinheli just outside Bangor, was diagnosed with B-Cell Non-Hodgkin’s Lymphoma on August 16, 2019, after initially suffering from a dull ache in his hip. He then underwent courses of chemotherapy and radiotherapy before being given the ‘all clear’ in January last year and eventually returning to the field with Bala Town in the 20/21 season.

The central midfielder joined the Lakesiders from Bangor City in 2018 and has also previously represented the likes of Rhyl, The New Saints and English Football League club Oldham Athletic, as well as the Cymru C squad.

Two fantastic acquisitions by the Cofis and a statement of intent for next season perhaps? Particularly after having gone so close to qualifying for Europe come the end of the last campaign.

Players like these two can definitely help Huw Griffiths’ side cross that line into European qualification in my opinion as they bring plenty of talent, experience and knowledge of the game to the club.