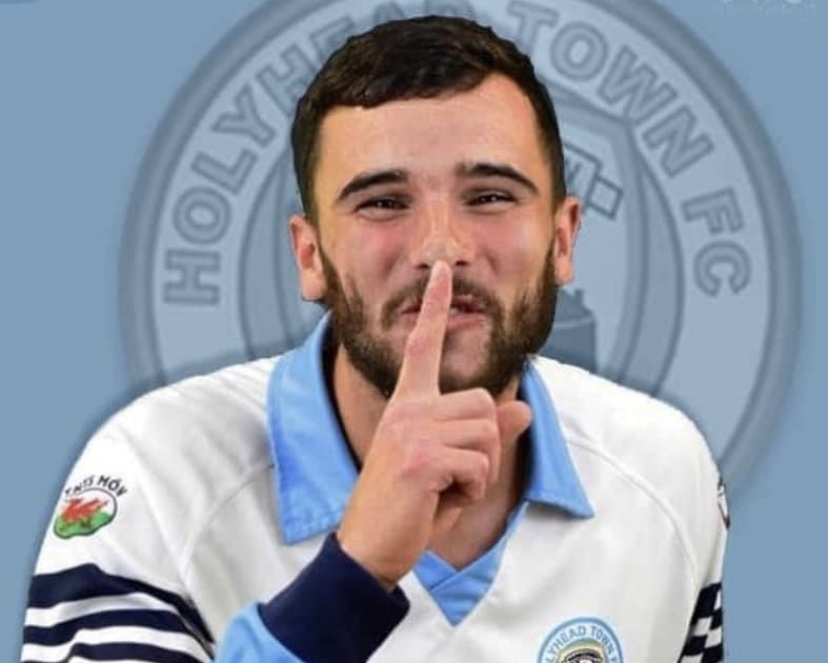 HOLYHEAD TOWN have announced four fantastic new additions to their squad ahead of the 21/22 season in North Wales Coast West Division One.

The Harbourmen have unveiled Stefan Taylor, Ryan Heywood, Jordie Murphy and – as reported two weeks ago on AFEFootballNews – Paul Williams to their ranks.

Perhaps the most impressive of those of course is Murphy (below).

Last year, the attacking midfielder joined newly-promoted JD Cymru North (tier two) side Holyhead Hotspur, who he had once progressed through the youth ranks of. But now, he’s back at Millbank – another former home ground of his.

He played in tier two in 2019/20 too when he starred for Chris Roberts’ Llangefni Town side, having previously played for the likes of Trearddur Bay United and Gaerwen in the Welsh Alliance leagues. Whilst with the Bay, he won the WA1 title alongside brother Dale in 2015/16, scoring 12 goals and then hit 13 there the season after.

2017/18 saw Jordie score 28 goals for Holyhead Town as they were crowned Gwynedd League champions and further back than that of course, in that 11/12 season Morawelon won the treble, Jordie notched 29 goals as he began to establish himself as a great player on the island.

By now, he’s won the Anglesey League, Gwynedd League and Welsh Alliance One titles, as well as the NWCFA Junior Cup and the Bet Fred Trophy twice during a glittering footballing career on the island.

Also signing for Town is the highly-talented and versatile young Taylor (below).

A quality left footed player, who came through the ranks of the Tynygongl FC youth set up, was last with Bangor 1876 but had struggled with injuries.

In recent weeks though, he’s been impressing in friendlies for Holyhead Town.

The club’s joint-manager Stephen Owen said: “I’ve known Stef for about 10 years now, always gives 100% on the pitch and he’s one of a number of players who stood out at youth level. When it came that he was looking for a fresh challenge we moved quickly to snap him up, he’s a great signing for the club.”

Defender Heywood (below) has also made the switch across to Millbank.

He’s been a strong and commanding presence in the heart of CPD Y Fali’s defence for many a season now and will no doubt be a quality addition to the Town side.

Last but not least is another versatile figure; Williams (below).

He’s another player who has played for Fali for a number of seasons and was a key part of their set up. He can play in a number of positions and is a tireless worker for his club.

Williams actually opened his account for Holyhead Town with a goal against Fali in a 3-1 win on his debut a few weeks ago.

Here’s some transfer news from elsewhere …

Despite signing for tier four Bodedern Athletic last year, the super stopper (below in green) has now made the switch to Sion Jones and Mike Williams’ side.

Druce is best known for his time between the sticks for Bryngwran/Trearddur Bay Bulls. Some phenomenal performances in 2018/19 helped the club clinch the Anglesey League title.

A season later, he was chosen as the Gwynedd League Player of the Season for his efforts in helping the Bulls claim a place in the top four in their first season in the league.

Druce, who was also a winger in the past, has proven to be one of the best goalkeeper’s on the island in recent times and was highly sought after by many clubs.

Also making the move to Llangefni Reserves is Ethan Jones – a former club captain at youth level who returns to the club after time away with Porthmadog Reserves.

Bangor 1876 have followed up a double signing last week with a further two impressive additions in the form of Tom Clarke and Corey Jones.

Centre back Clarke (above) came through the youth system of Oldham Athletic and joins 1876 from tier two side Conwy Borough.

He’s a strong defender who was part of the Ynys Môn team which won gold on home soil at the Island Games Football Tournament back in 2019.

Midfielder Jones (below) has made the switch from Holyhead Hotspur, where he spent the last six seasons.

He’s a former Bangor City youth player who will add even further quality to that 1876 side in tier four and will team up once more with fellow former Hotspur stars such as Sam Ashworth and Chris Jones.

And Hotspur themselves have been busy securing a double signing of their own too!

Another member of that Ynys Môn 2019 squad – Dafydd Jones – has signed on the dotted line at the New Stadium.

Over the last few seasons, the hard-working midfielder (below) has been quality for both Bodedern Athletic and more recently with Conwy Borough, where he earned himself great experience at tier two level. That will come in handy with newly-promoted JD Cymru side Hotspur in 21/22 no doubt.

The second player to have joined Hotspur this week is ex Bangor City and Conwy Borough defender Adam Pritchard.

He’s a player who spent a year-and-a-half playing college football in the USA and is a technically gifted defender who will offer a great option to Hotspur.