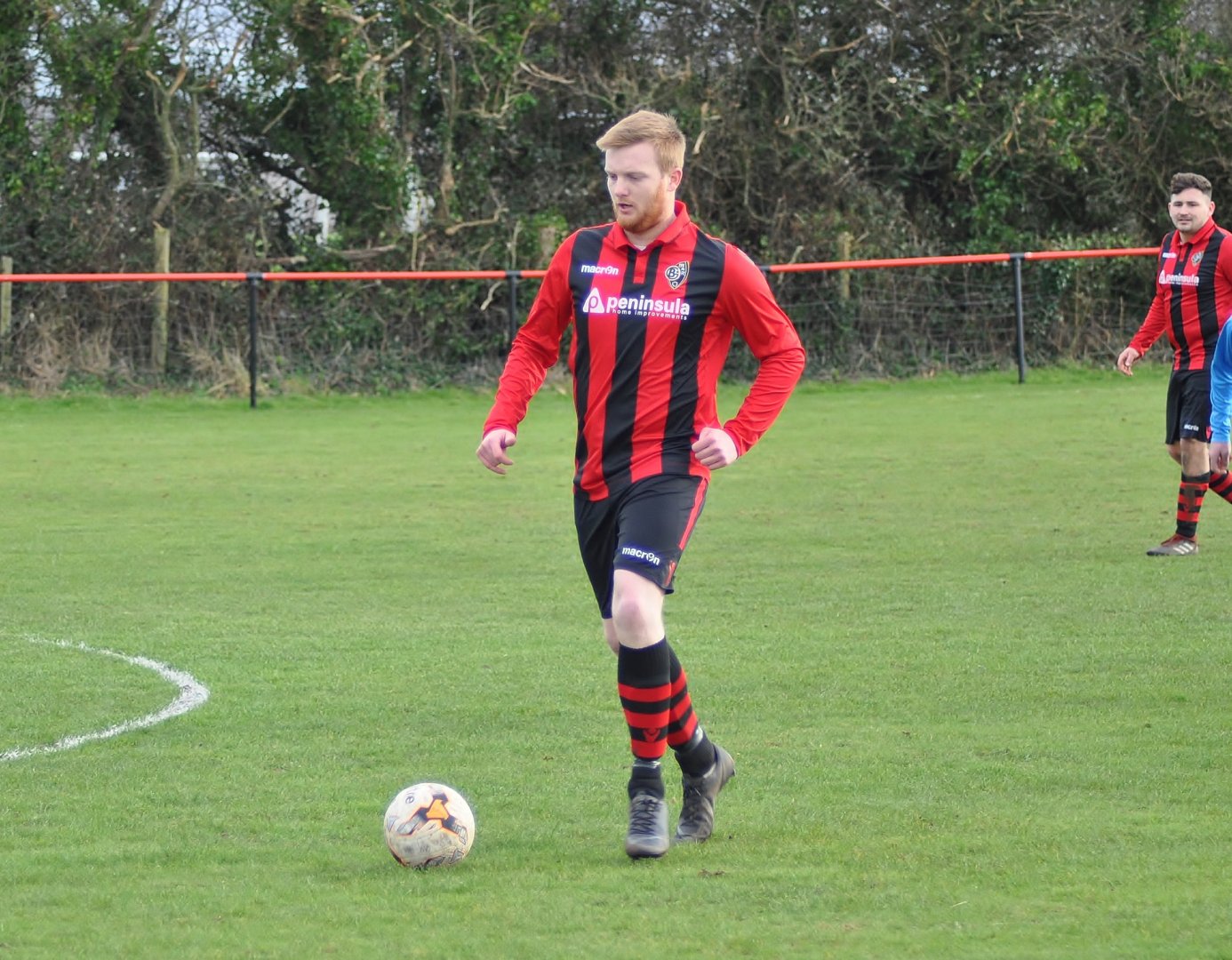 PICTURE by Paul Scholes shows Taylor Jones on the ball for Bro Goronwy.

CEMAES BAY’S squad for the 2021/22 North Wales Coast West Division One campaign is already brilliant. But now they have strengthened their side even further with a great signing to add to their ranks.

The side, managed by Darren Thomas and Lee Potter for the upcoming season, won the last ever Anglesey League campaign in 2019/20 with Thomas in charge.

They will once again be looking to match their way on to the title in tier five this time around too – although there will be stern competition from the likes of Llanerchymedd, Mountain Rangers and Caergybi I’m sure.

Bolstering Bay’s squad now is their latest signing – midfielder Taylor Jones who has agreed to sign for the club from tier four side Pentraeth.

The 26-year-old (on left below) is a player who can play in a number of positions – slotting in at centre back for Pentraeth in Welsh Alliance Two in 2019/20, after switching from long-term club Bro Goronwy midway through the season.

Whilst with Moelfre-based Bro, where he was predominantly a midfielder, he had a record of 52 goals in 154 matches.

Jones also twice hit 20 goals in a season for the club and in 2018/19, he scored in the 3-1 NWCFA Junior Cup final win over Bryngwran (now Trearddur Bay) Bulls as Bro won the prestigious cup for a third time in their history.

He’s a real technically gifted player who has so many great qualities to bring to any team he plays for – he will be a fantastic asset to an already talent-packed side at Cemaes’ School Lane.

Looking forward to playing in the red of Cemaes Bay, Jones, whose brother Connor was also at Pentraeth with him last season, said: “I wanted a new challenge and to go somewhere where I could win some trophies and compete for the league so Cemaes made sense. I’m also looking forward to linking up with old teammates and managers there.”

Some of the old familiar faces he’ll link up with at the club are; former Bro midfielder Liam Griffiths, ex-Bro manager Lee Potter who joined the Bay management team last year and also current Bay assistant Alan Gray who was assistant to Potter at Bro previously.

Manager Darren Thomas also hinted to AFE that a few more signings would be made by the club in the coming weeks before the season presumably kicks off in July.