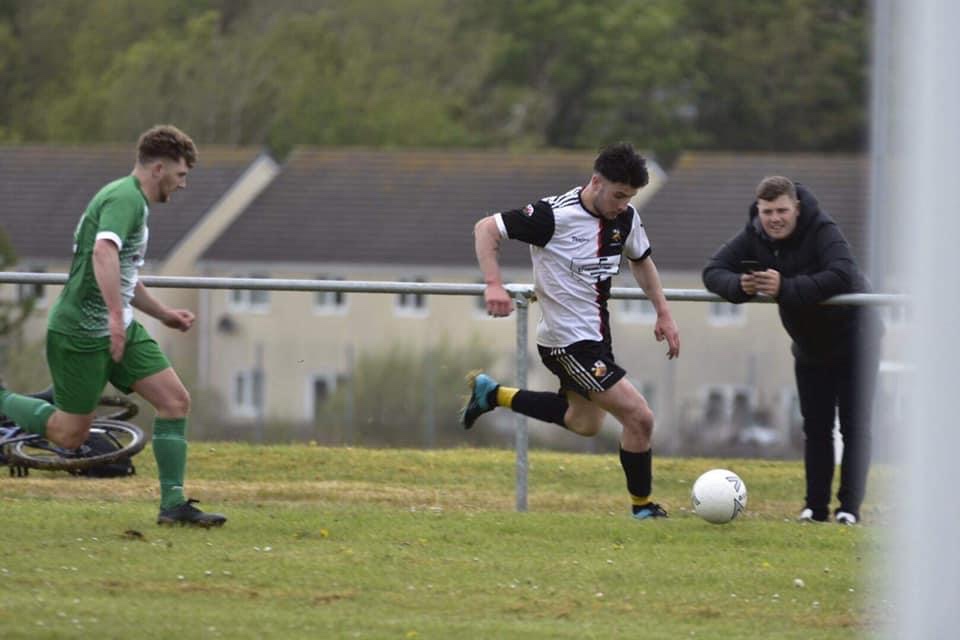 PICTURE by Trevor Owen shows Jerome Sillence on the ball for his new club Caergybi.

CAERGYBI FC have once again strengthened their squad even further with two fantastic signings announced yesterday.

Attackers Jerome Sillence (below) and Gwynfor Owen we’re both part of the formidable Bryngwran Bulls side who won the Anglesey League under Richard Owen and Carwyn Jones back in 2018/19.

That season the pacy Jerome, 23, netted 12 goals in all competitions. He then scored eight goals last season for Valley before he joined the Marines and the pandemic cut the season short.

Over the years, his best goals return in a season was 37 goals and he was also part of the Valley Athletic side who won the Anglesey League and cup double back in 2014/15.

Powerful forward Gwynfor, 33, was one of the surprise stars of that title-winning Bulls season of 18/19. He had transferred over midway through from Pentraeth Reserves (where he hit 9 goals) and became an instant hit at the club.

Between Pentraeth and the Bulls that season, the forward (below) managed 23 goals – including one on the day they officially won the title with a 3-0 win over Arriva Bangor in Gaerwen. Owen was always a handful when playing up top and contributed well when called upon in the absence of Craig Moore (now also at Caergybi!), who was injured earlier on in the season.

Last summer, after bagging a further 15 goals for The Bulls in the Gwynedd League last season, Owen briefly transferred over to 2019/20 Anglesey League champions Cemaes Bay before pledging his allegiance to Cybi this week.

These two will add even more quality to Dale Moffat’s side who have made a number of key acquisitions already ahead of the 21/22 campaign in North Wales Coast West Division One.

They should most certainly be up there competing for the title in tier five.