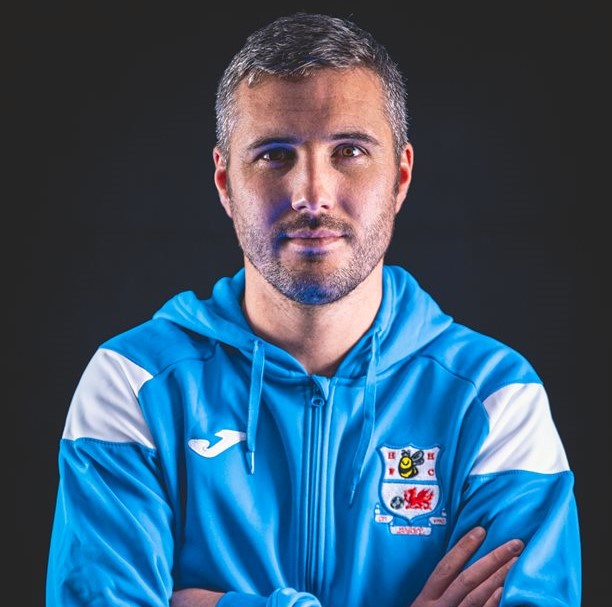 TOM SCOTT has announced that he is stepping down from his role as manager of Holyhead Hotspur Reserves, adding that he is doing so with “immense pride”.

Scott has been involved with Hotspur in one capacity or another for 23 years in total and took on the role of player-manager for the second string ahead of the 2019/20 campaign.

He went on to help the youthful and exciting side finish third in the Anglesey League, enjoying a brilliant season in which the club also reached the Dargie Cup final – where they would have faced Cemaes Bay had it not been for the coronavirus pandemic ending the season early.

He had been a huge influence from the sidelines, and on the pitch at times, for the young talents at the club last season, including the likes of Phil Jones and Mitchell Jones who were breaking through into senior football.

Tonight though, Scott has announced that he will be leaving the role ahead of the 21/22 season in which Hotspur Reserves will take part in the North West Reserve League following the restructuring of the leagues in 2020.

In a statement confirming his departure, Scott said: “Well this is weird. Had the pleasure of being associated with this great club for 23 years. Youth football all the way to senior level. Unfortunately I’m unable to continue within my role as Reserves Manager due to work and family commitments and ultimately couldn’t commit to the responsibility that the role deserves entering a new league etc.

“It’s with immense pride that I leave behind a team full of talent who under the current coaching staff will go on to represent the first team in the near future. It’s been a privilege to coach you and play alongside you for the last few seasons. You’ve made my job a lot easier in how you’ve conducted yourselves. Couldn’t have asked for a better group. No doubt that you will all have very bright futures in the game.

“The coaching staff you have in place will take you too that next level within the new league structure. Massive thank you to my coaches for all the support you’ve given me.

“Personally want to thank everybody on the committee for their hard work in not only supporting me as a player but also as a manager. Too many to name but without all your hard work behind the scenes then we wouldn’t have had the success we have had as a football club at all levels.

“Next step is to hopefully carrying on playing and start my journey with my sons footballing career to spend more time with him. And going to watch Hotspur as a fan. Thanks for everything.”