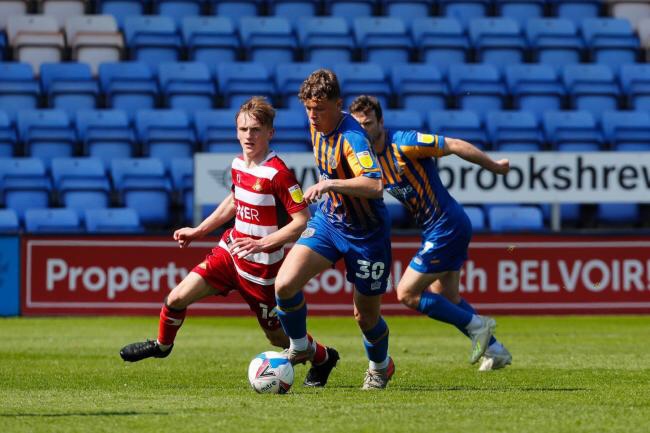 A YOUNG MAN from Denbighshire has become the latest North Walian to play in the English Football League.

Charlie Caton, who is the son of Bala Town manager Colin, made his League One debut for Shrewsbury Town in a 2-0 home defeat to Doncaster Rovers on Saturday.

The 18-year-old, who is from Ruthin, had previously played for Salop’s first team when he played the last ten minutes in a thrilling 4-3 Papa John’s Trophy victory over Crewe Alexandra back in November 2020.

But Saturday was Caton’s first official EFL appearance for the club. He came on for the last 13 minutes, replacing Daniel Udoh.

After the game, Caton – a former pupil of Ruthin’s Ysgol Brynhyfryd – Tweeted: “Disappointing result today, but proud moment to make my league debut.”

Caton, a left footed centre forward, started out at Ruthin Rovers before signing for Wrexham’s academy at the age of eight years old.

He then joined the Shrewsbury Academy as an U16 and has swiftly progressed at the club. He was the U18s top goal scorer last year, scoring more than 20 goals.

He has also made several appearances for Wales at various youth levels.

Dad Colin has managed Bala Town for the last 18 years – taking the Lakesiders from the Wrexham Leagues to the UEFA Europa League qualifiers.

He recently celebrated his 700th game in charge of the Lakesiders, making him, reportedly, the longest-serving manager in the UK.