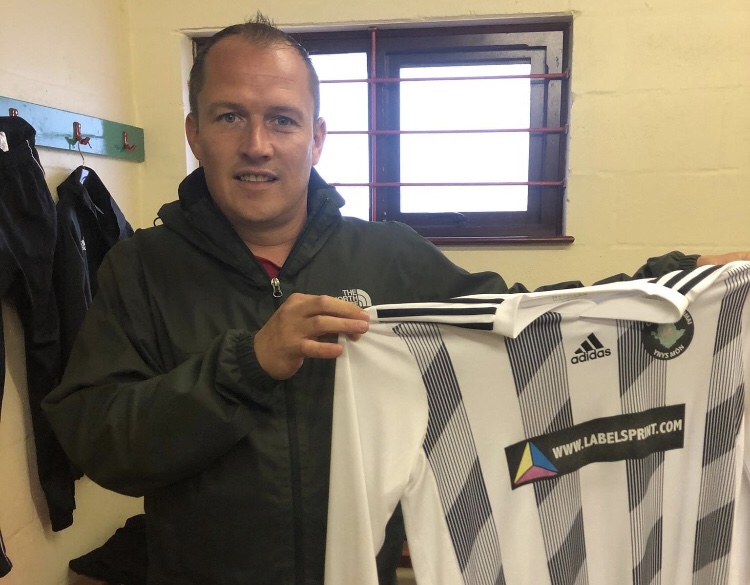 COREY Sinnott is a well-recognised and respected name within Anglesey football (and beyond) by now.

The 38-year-old, who is from Llangefni, has enjoyed many a great success during a career on the island which has spanned more than 20 years.

Attacker Sinnott began his senior career with Llangefni Town, who were a Cymru Alliance team at the time.

He then went on to be a huge part of Bodedern Athletic’s Welsh Alliance title-winning side of 2004/05 before signing for Glantraeth, where he played in the Cymru Alliance with the club.

Sinnott then arrived at Gwalchmai, where in 2009/10, he helped the club onto a fantastic Gwynedd League treble. He has remained with Gwalch ever since, aside from a brief second spell with hometown club Llangefni Town (below) when Gwalch folded temporarily in 2016/17. He also played Sunday League for the likes of Bryngwran Bulls (below).

The Maes Meurig outfit came back to life a season after and Sinnott returned to the club he has, by now, scored well over 100 goals for. His finest goalscoring seasons for Gwalchmai came in both 2011/12 and 2012/13, scoring 24 in each of those.

He has also scored in two NWCFA Intermediate Cup Finals that Gwalchmai lost – against Greenfield in 2009 and Prestatyn Town Reserves in 2010.

Talking about the highlights of his career, Sinnott said: “That was probably getting Gwalchmai promoted to the Welsh Alliance. The club ended up offering to pay the players to play, which was the norm back then in that league and all the players turned around saying they didn’t want money to play for the club. I think that was the moment I knew I wanted to stay at the club for the rest of my career as it showed the togetherness of the team and club. That was a great day.

“(My reason for signing for Gwalchmai) was because we had Paul Owen (Skin), Rob Hughes and Paul Bryant there who were all close friends and knew all the lads too so it was a no brainer for me to go there.

“Everyone has played their part in my development as a player from Els and Ems and Osian Roberts in the juniors to Bri Boded, Kev Hughes, Paul Owen (Skin), Kenny Jones. Chris Bach, Mart Bach (Martin Jones) and Craig Evans but the late great Rob Hughes (below) was the person who I probably learnt the most off. He was always a constant in my career from Boded to Gwalchmai and back in Llangefni, he wouldn’t say much but when he spoke you listened you took it in and you were a better player from it. A really great man who is sorely missed by all.”

Talking about the biggest low point, he added: “That was probably my time at Glantraeth. We had a very good team, just couldn’t buy a win. It was weird. I had a manager that didn’t really believe in me for the first and last time in my career so it was just a total nightmare. But still a good laugh off the pitch, so not all bad.”

Last season, Sinnott was still banging in the goals for Gwalch – having hit 16 goals before the COVID-19 pandemic brought the campaign to an abrupt end.

So much will have changed since he began playing senior football on Anglesey in the 90’s. But what does he think is the biggest difference of all these days?

“The money’s gone out of the game,” he said

“The majority of players don’t sign for an extra tenner anymore they want to play for a club that they like the look of or where there mates are and that’s what football is all about – enjoyment and the love of the game.”

Talking about what the future holds for him in the game, Sinnott, who has put retirement off a few times in the past, said: “Well, I’m working every Saturday now so I have no hopes in football really except that it comes back in all levels and clubs and communities can enjoy there Saturday’s again. Football is the heart and soul of every town or village and the sooner it’s back the better.”