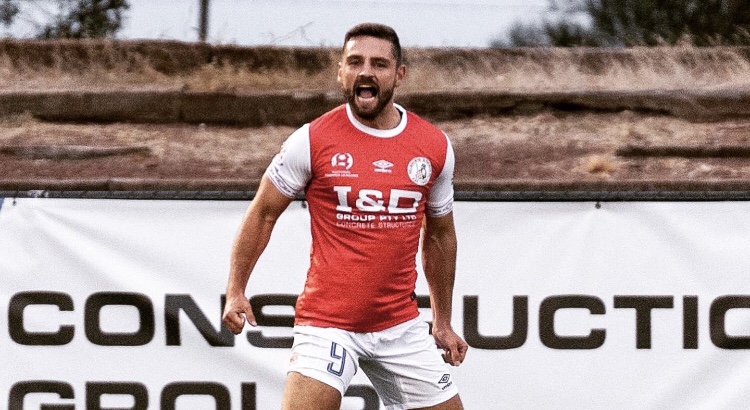 A FORMER JD Cymru Premier player is currently loving life down under with Melbourne Knights.

Forward Alun Webb will be a familiar name to fans of both his hometown club Llandudno FC and Rhyl having played for both in years gone by.

His career has taken him across the globe in between and after spells with those two clubs.

Webb began his senior career at Glan Conwy. Football became his main sport after his dad introduced him to it. He says he remembers his first real football hero being the Brazilian Ronaldo and even, rather bravely, admits to having copied the player’s unique haircut from the 2002 World Cup!

The 27-year-old has gone on to enjoy a career which has already taken him from his native of North Wales to England, Sweden, USA and now Australia.

When he was on a programme at Loughborough University, Webb played for Shepshed Dynamo, Rushall Olympic and Worcester City. He was also signed up by then-Rhyl manager Niall McGinness and then came one of his career highlights – scoring against the team he supports, Liverpool.

Later, he returned to Rhyl under Mark Connolly and moved to Sweden with Gällivare FF before returning to North Wales once more, where his top-flight career really took off with Llandudno in the Welsh Premier League (now JD Cymru Premier).

A prolific stint in America with Tennessee-based Chattanooga FC then followed for Webb in 2019 – where he scored in a friendly v La Liga side Real Betis. During his time there, he also made the ‘All America Team’ and Chattanooga were Conference Champions too.

He then moved to Australia, where he initially played for Adelaide Raiders. The attacker enjoyed a great spell with the club, notching up 12 goals in just 20 matches before switching allegiances to current club Melbourne Knights in January of this year – a club which also had current Flint Town United player Rob Hughes on its books briefly previously.

The National Premier League (NPL) Victoria side play in front of crowds of up to 15,000 at their Knights Stadium home ground and, with football (or soccer as they call it) in Australia being largely unaffected by the Covid-19 pandemic, Webb has been able to carry on playing.

He scored his first two goals for the club in the Knights’ 2-1 victory over Dandenong Thunder on March 5.

Talking about the season to date and his career highlights over the years, Webb said: “We’ve been so lucky over here. We actually only had six weeks of lockdown and then everything has been as normal. Australia always appealed to me, and I’m delighted I was able to come over here and perform well. Hopefully there’s more to come too.

“I think football outside the UK is generally less physical, although here in Melbourne it is very similar to home. Over in the states, the lads are extremely athletic. I feel very fortunate to have experienced these different types of football and it has, for sure, aided my development as a player.

“I’ve been lucky in terms of games, having played against Manchester United, Liverpool, Leicester u21 sides and then Real Betis when I first got to the states. I was even lucky enough to score against Liverpool and Betis which were fantastic individual moments, but I think making the national final for college soccer in the US was such a fantastic experience with a brilliant group so that’s probably that overall. In Wales, probably scoring a WPL hattrick (for Llandudno) was my best moment overall.

“In terms of the person I’ve learnt the most from I’d probably say it was my coach I had at Adelaide Raiders. He was intrumental in my change from winger to striker, and he also helped me in terms of how I think about the game so I learnt a lot from him. Thanks Kuzi!”

Asked about whether or not a return to Wales could be on the cards in future, Webb added: “In terms of the future, we will see I guess. I’m really enjoying it out here but I would love another season in the JD Cymru Premier at some stage for sure.

“For now though I’m really enjoying my time at Melbourne Knights, its a massive club with a big history so if we can achieve success this season and beyond it will be brilliant for everyone connected with the club.”