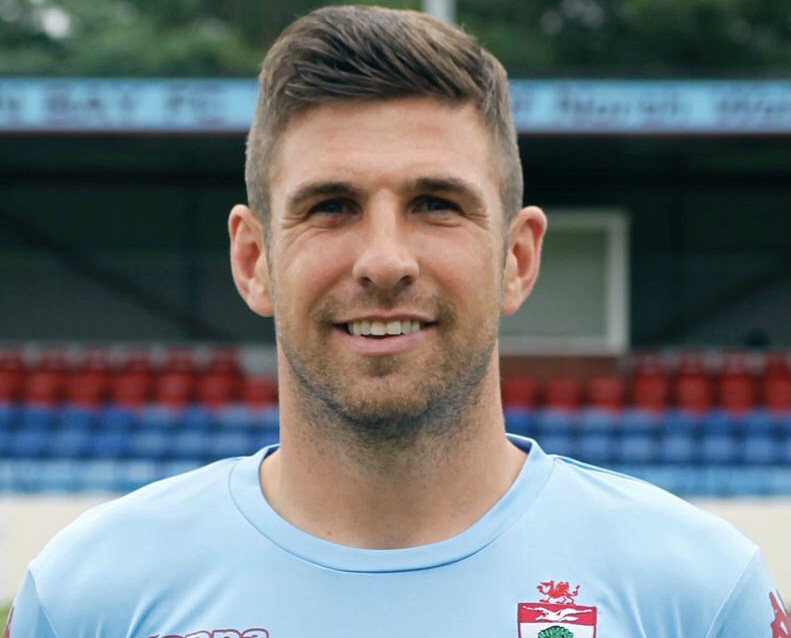 DEFENDER Mike Williams has recalled the ‘shock’ of being told by doctors that his days of playing professional football were over at the age of just 28.

The centre back, who currently plays for JD Cymru North outfit and part-timers Colwyn Bay Football Club, played alongside both Gareth Bale and Aaron Ramsey for Wales’ under 19’s and under 21 sides. But, his pro days came to an end following a diagnosis of osteoarthritis of the hip being made around six years ago.

Williams’ career began in Wrexham’s academy when he was just 10 years old. He went on to make 117 appearances for the senior side, with his brother Marc (the very first person I ever interviewed on the blog!) also a much-loved member of the team at the Racecourse during those days.

Having been released at the end of the 2009/10 season, Mike, now 34 years old, signed for Kidderminster Harriers where he spent three seasons before joining Altrincham and becoming club captain in his second season there. It was whilst with them, that he would receive the devastating diagnosis which put and end to his professional footballing days, following specialist advice from doctors.

Mike, who is from Colwyn Bay, recalled: “When being told the news that my football days were over, you can imagine it was a big shock. Can you imagine everything you have ever known and dreamt of doing being taken away from you in one conversation?
“A footballer’s career we know to be typically short, but I still thought I had another 7 years or so left. I had no plan, money saved or job opportunity and with bills to pay and a young family, I took a job with my brother-in-law as a delivery courier. I worked hard and it was in this period that has probably built my character the most and the resilience within.”

Williams went on to begin playing football again for semi-pro clubs in North Wales – where he says he ‘fell back in love’ with the game.

He signed for one of his local clubs – Llandudno FC in 2015, who had just secured promotion to the Welsh Premier League (now JD Cymru Premier) at the time and was re-united with brother Marc on the field once more.

He was part of a Seasiders side who enjoyed a historic spell as a club, getting into the qualifying rounds of the UEFA Europa League for the first time in its history at the end of the 2015/16 campaign (their first season in the Welsh Prem) and going on to face Swedish side IFK Goteborg in the following season as a result of that.

Mike said: “I fell back in love, I was the young boy again who first started playing for the enjoyment of the game – it was amazing how I approached every game now, after being told I could never play again. This was one of my favourite seasons, and against all odds we got into the Europa league.”

Williams spent three seasons at Llandudno (AFE actually sponsored him back in the 2017/18 season!) before making the move to Bangor City and finally switching to hometown club Colwyn Bay in 2019, where he has remained since. Last season, he made 17 appearances for Craig Hogg’s side as they finished in an impressive fourth place – having made a return to the Welsh football pyramid after some time away playing in the English leagues.

Williams is now planning the next step of his life, as he transitions from being a full-time footballer into a financial advisor. He feels he can help other footballers who may encounter similar situations to himself – uncertainty over their future if their careers are cut short.

He said: “As a sportsman, football has instilled many qualities over the years and it’s that drive and striving for new challenges that made me look to my future. What are my strengths and how can I help others.
“I was introduced to the St James’s Place Academy, and after a vigorous interview process, I was accepted. I now have the foundations and support team to help me on my journey and transition from professional footballer to financial advisor.
I never had any financial advice during my career, and it is something I wished I had when uncertainty struck. Being an advisor will give me the provision to help players, family and friends make sure plans are in place so they can better understand their financial position, protect their families and make a positive impact on their future.”