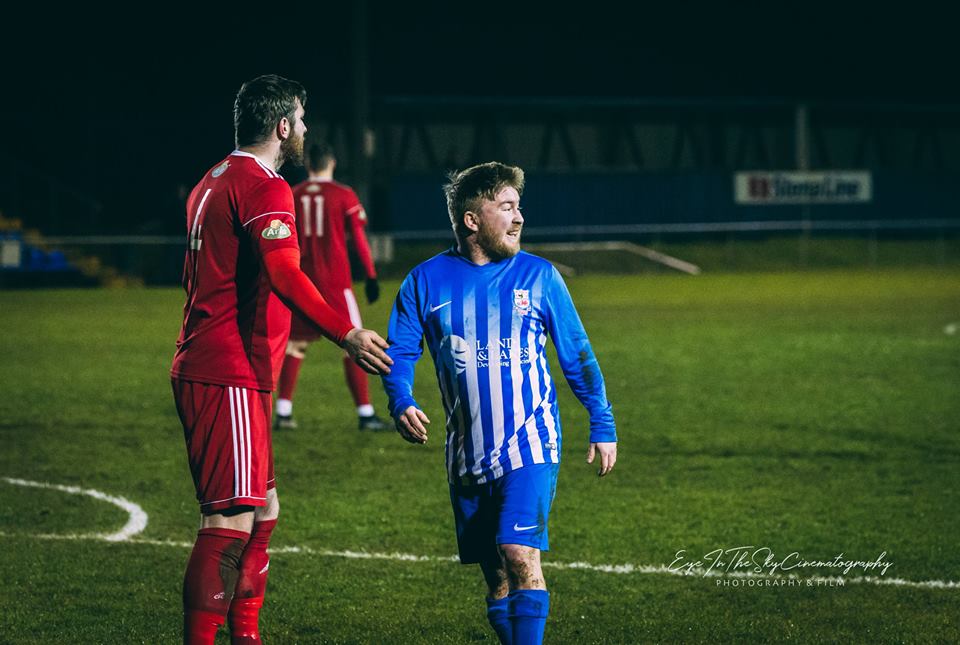 WITHOUT a shadow of a doubt, one of the finest players to have been produced on Anglesey in the 21st century.

Striker McGinness went down in the island’s history books sporting-wise in the summer of 2019 as he scored the winning goal in the final of the Island Games Football Tournament to secure gold medals for the Ynys Mon men’s team.

Club wise, the 30-year-old is best known for his exploits whilst with Holyhead Hotspur – a club he returned to last summer and a club he will play for alongside brother Dan when football resumes for JD Cymru North clubs in March (Covid-19 guidelines permitting).

He will also join an already deadly attack that includes Chris and Robert Jones who smashed in more than 30 goals between them last season.

Last season, he split his campaign between Porthmadog and Llangefni Town, who were both playing in the JD Cymru North (tier two level). But now, with Hotspur promoted to that division having won Welsh Alliance One last season, Mel is back where he belongs.

Deceptively quick and strong despite his small stature, McGinness has been one of the island’s best finishers for several seasons. He holds the ball up very well, has one of the best first touches around, and pounces onto any mistakes defenders might make. To the point that even if he only gets half a chance, he looks certain to score.

In August 2006, when he was just 16 years old, McGinness signed for Bangor City. A month or so later, he made his Citizens debut in a 2-2 Welsh Premier League draw against Carmarthen Town. His first goal came a month after that – when he netted in a 4-3 loss at Caernarfon in the Loosemores League Cup.

However, despite being named in City’s UEFA Cup squad of 2007/08, chances became limited for McGinness at Nantporth and after, a brief spell with Llangefni Town in 2008/09, it was time for the forward to return home to Holyhead Hotspur – where he had started out as a youngster.

By now at Hotspur, he’s regarded as a club legend for the lasting impact he has made at the club.

The highlight of his days at The Oval, was undoubtedly the feats of 2011/12 where – in a season in which he hit 50 goals – the club itself also secured a treble (Welsh Alliance One, Cookson Cup and Barritt Cup), as well as finishing as runners-up in the prestigious Wales-wide FAW Trophy final.

From there on out, he became a prolific goal-getter for the club and returned once more after another brief spell at Welsh Alliance Two side Gaerwen in 2015/16.

Upon another return to Hotspur, he wrote his name into the club’s history books once again when he hit a memorable hat-trick to round off a season in which the club won the Welsh Alliance Reserves Division Lock Stock Fireworks Challenge Cup – smashing Bangor City 4-1 at Maes Eilian, Llanfairpwll.

Despite Hotspur’s woeful season during 2018/19, which saw them relegated from the Huws Gray Alliance (now Cymru North), McGinness continued to show his goal scoring prowess and his determination – bagging eight league goals and scooping the division’s Player of the Season award despite the club’s struggles as a whole.

The summer of 2019 bought about one of the finest moments of his career to date as he netted the winner in the Inter-Island Games Football Tournament final. Campbell Harrison’s men won gold thanks to a 2-1 win over Guernsey – and McGinness’ winner gave us this fantastic photo (below) of the celebrations that followed with supporters following the goal.

After that fine summer, McGinness decided to make the switch to Cymru North side Porthmadog – where he joined up with fellow Mon team mates Paul Pritchard, Jay Gibbs and fellow summer signing from Hotspur – John Littlemore. He scored five goals for a struggling side, which would eventually be relegated to tier three, but the forward transferred over to Llangefni in January 2020 where he was again a threat before the Coronavirus pandemic struck.

When it comes to local heroes, Holyhead will always regard McGinness as one of their own. However, the summer of 2019 ensured that he was a hero for the whole island also.

A player with plenty of heart and endless amounts of raw talent, Mel is a joy to watch!