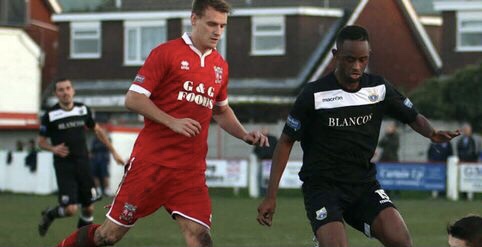 A TOP CLASS defender/midfielder whose great experience and knowledge of the game was a vital feature within Prestatyn Town’s JD Cymru North winning side of last season.

The much-loved Parker returned to the Seasiders in the summer of 2019 after a brief spell away with Connah’s Quay Nomads, where he was part of a squad which finished JD Cymru Premier runners-up and reached two cup finals in 2018/19.

The 33-year-old, who had spent 13 years at Bastion Gardens prior to that move, made his mark in tier two last season as the club were crowned champions during a curtailed season.

Parker, who is Prestatyn’s all-time record Welsh Premier net-finder with 48 goals, was influential at centre back and made 15 league appearances.

His great performances caught the eye of the JD Cymru North managers too as he was selected in the 2019/20 JD Cymru North Team of the Season for his efforts.

But, with the club denied promotion to the top-flight due to ground criteria, and other divisions suspended due to the Coronavirus pandemic, Parker would eventually be one of several stars to depart Prestatyn in 2020.

He moved along with forward Jack Kenny to Caernarfon Town, where he played eight top-flight matches before the 20/21 campaign was halted in December.