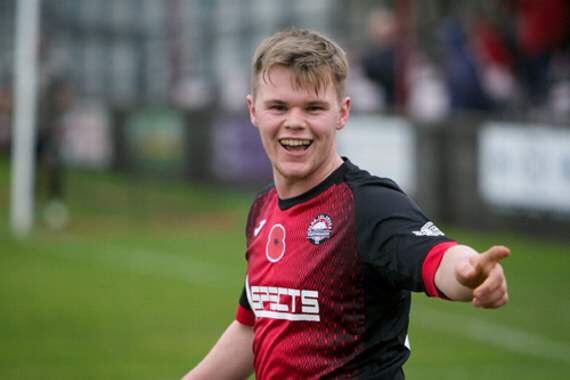 AN EXCEPTIONAL young talent who was a glimmer of hope in what was an overall miserable campaign for Porthmadog in 2019/20.

Craig Papirnyk’s side were relegated to tier three along with Llanfair United and Corwen come the end of a season called off early.

Midfielder Jones was one of those who did stand out for Port however and showed he had great potential.

The former Bangor City academy player is a skilful and highly-competitive midfielder who seems to have very bright future ahead of him.

A former member of Wales Academy U19 squad and also the Welsh Colleges U18s, he impressed for the club in 2018/19 when he scored four goals in 34 matches.

One of the highlights of the player’s 2019/20 season came when he scored directly from a corner in Port’s impressive 4-1 Welsh Cup win over fellow JD Cymru North side Gresford Athletic.

He’s held in high regard at Port and it’s not hard to see why as he’s a composed figure in the middle of the park.