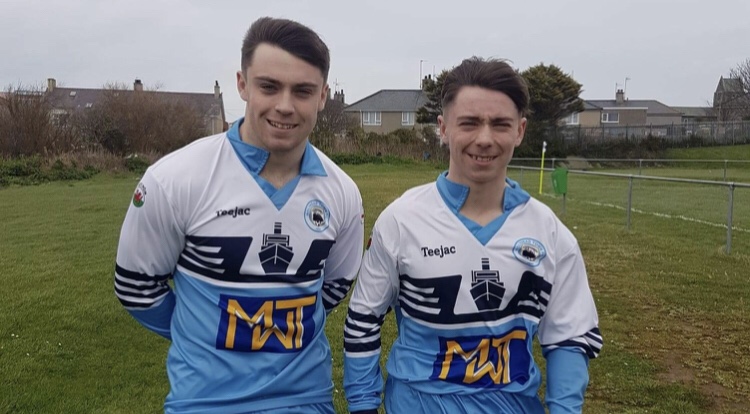 ON TUESDAY, I featured a story on five brothers from Holyhead who have achieved so much within local football over the years.

Tonight, I turn my attentions to two up and coming footballing brothers from the same town who look as though they have very bright futures ahead of them.

I’m talking of course about Jenson and Jordan Rowlands, who are both currently playing for North Wales Coast West Division One club Holyhead Town.

Their grandfather John was a very successful manager with the Harbourmen in the past and his son and their father Paul was also a player for the club – so the Rowlands family traditions are well and truly cemented into Town’s history by now.

Ready to write the next chapter are Jenson and Jordan, who both recently featured in my Stars of the 2019/20 Season series recently due to their fantastic performances during the last campaign.

Jenson (below), who was 16 when that campaign started, proved to be one of the best young talents in tier five.

The talented midfielder, even put in a few Man of the Match performances for Stephen Owen’s side and scored his first senior goal in a 3-1 loss at home to Cefni. He played as both an attacking midfielder and a defensive midfielder during the course of the season and showed great potential for a Town side that has undergone a big transformation over the last two years.

He has continued to impress for the club in friendlies played recently, netting a goal against a very talented Llangefni Town Reserves side.

Older brother Jordan (below), who previously played for Holyhead Hotspur and Trearddur Bay, started last season with Caergybi in the Gwynedd League before joining Town in February 2020.

The defender, once also part of Shrewsbury Town’s academy, was part of the Caergybi side which secured a cup double and won promotion to the Gwynedd League in 2018/19 and proven to be a fantastic player to have at the back for both Cybi and Town over the last few seasons.

There seems to be exciting times ahead for Holyhead Town (once football resumes) and it appears that these two will have very big roles to play in seasons to come for a club which is already well and truly ingrained into their family’s history.