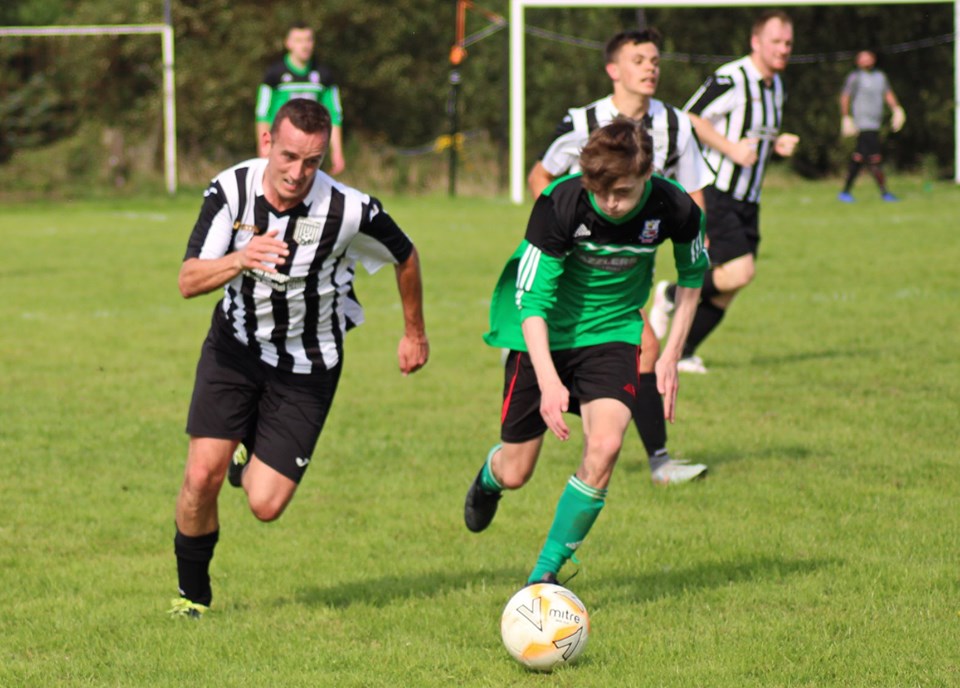 THE 2019/20 season will forever go down as the one that was never completed – for many divisions around the world. Including our own here on Anglesey.

In what was the very last season of the Anglesey League in its traditional form, after 125 years of history, the season would end abruptly due to the Coronavirus pandemic.

However, there were certainly still some standout stars throughout the campaign and enough matches were played for me to able to choose my official team of the season once more. Cemaes Bay were crowned Anglesey League champions for 2019/20 with 41pts to their name in 16 games and a PPG (Points Per Game) ratio of 2.56, compared to runners-up Mountain Rangers who went agonisingly close with a PPG of 2.53, having picked up 38pts in 15 matches.

‘Huggies’ had the most clean sheets in the division and conceded the fewest goals (16) too.
He was the most consistent goalkeeper in the league and was a real safe pair of hands behind what was an already solid back-line at Alex Philp’s Rangers side.
Every great team starts with a great goalkeeper and the Rangers had the league’s best last season.

Easily the best defender in the division for me.
Having spent a number of seasons as captain of Gwynedd League side Bro Goronwy (where he bowed out by scoring as they became NWCFA Junior Cup champions in 2018/19), Jones made the switch to Cemaes last summer to join a formidable side led by Darren Thomas, Alan Gray and Gez Owen.
Jones’ experience of playing for, and leading, a team at a higher level told on the pitch as he made defending look easy at times.
The centre back was very rarely beaten to the ball in the air and his physical presence was enough to see him get the better of most attackers.
And with nine goals to his name too, he was a real welcome addition to the Anglesey League.

Another solid defender in the heart of a Rangers back line that looked impossible to break down at times during the season.
DAJ was a highly-reliable centre back who led his side’s defence well throughout the campaign.
He has now returned to former club Talysarn Celts ahead of the 2020/21 campaign and I’m sure he’ll be sorely missed by all at Rangers.

A breakthrough star last season who, at just 16 years old, was one of the best players in the Anglesey League.
Full back Jones was a dependable defender for his side but was also a real threat going forward too as he picked up six goals in all competitions.
His performances did not go unnoticed either as he even made an appearance for the Holyhead Hotspur first team.
This young man has a very bright future ahead of him in my opinion and he’s certainly one to keep an eye on.

Another 16-year-old who burst onto the scene in 2019/20, Davies has impressed so many throughout the division with his work rate at Llanfairpwll.
Brother of former Llanfairpwll defender Sion Emlyn (pictured playing against Owain above), who is now at Llangefni Reserves, Owain made that space at full-back his own under Vinny Walker and Spud Thomas and must have become one of the first names on the team sheet following some brilliant performances.
Much like Jones, he’ll be one to keep an eye on in the coming seasons if he can maintain that kind of form.

I chose Downey as my official PLAYER OF THE SEASON for 2019/20 as I thought he was easily the best player to watch in the division when fully fit and he looked streets ahead of others at times.
The Cemaes captain really got things working for his side from the middle of the park and made the difference whenever they needed it most. Downey, 23, also notched up 15 goals and 19 assists in just 22 matches from central midfield.
Football is about so much more than just goals. It’s about working hard for your team, creating chances for your team mates and battling hard for that win. Downey ticked all those boxes last season for me.

Another captain and leader in the division who deserves a mention and deserved to make this starting eleven.
Former Welsh Premier League player Kay, who turned 36 earlier this week, ran the show for Rangers from the middle of the park.
He also notched up 13 goals in all competitions as his side pushed Cemaes all the way for the title before ultimately falling short due to the season being called off early.

Another player who was a real joy to watch for his side and really stood out, ‘Eddie’ was an experienced head in what was an otherwise very youthful, but still exceptionally talented Hotspur Reserves side.
He was a real leader for Tom Scott’s side and made things look easy with his awareness and passing from the middle.
The Reserves were something of a surprise package last season, beating Cemaes twice in different competitions, and Edwards was a big part of that squad.

The Busmen’s star man was in fine form once again in 2019/20, and, having picked up 106 goals in the two seasons previously, he was fancied to go all the way for the Anglesey Leauge top scorer prize come the end of the campaign.
But, that wasn’t to be as he picked up a few injuries throughout the campaign. Nevertheless, Hughes still smashed in 41 goals in all competitions and will have added many more had the season not been curtailed I’m sure.
He’s undoubtedly one of the best finishers around on his day and his ability to get in behind defenders is great. After many, many seasons with Arriva, the forward has now moved on to Sean Brett’s Glantraeth side ahead of the 2020/21 campaign.

‘Tyco’ was the second top-scorer in all competitions last season with 27 goals in the Anglesey League and 12 more in cup competitions giving him 39 goals in total.
The lethal forward returned to the Bay alongside a host of other former players last summer as they ‘got the old band back together’.
Having spent time with Bodedern Athletic in the Welsh Alliance, where he promotion to WA1, his experience unsurprisingly told on the pitches of the Anglesey League as he tore defences apart.
He has re-committed to the club ahead of 2020/21 and so will continue to terrorise defences I’m sure!

The official top scorer in the league and in all competitions for 2019/20 who had an incredible season.
Former Llanrug United man Williams was a handful for many a defence to deal with in the division as he netted 33 goals in the league and 12 in the cups to put him six clear ahead of Whittaker on 45 goals for the season.
‘Ziggy’, as he’s known, caught the eye of many when he scored TWELVE goals in just one game in Rangers’ 16-0 demolition of Cefni back in January – a feat that may even be a record throughout Wales at senior level (Although this is unconfirmed).
He was the best of the best and an absolute goal machine for his side. I for one can’t wait to see what he can do again next season.

There can only be one winner here really as there was only one prize up for grabs in the end last season, due to the Coronavirus ending it early, and his side won it.
Darren Thomas’ formidable Cemaes side, mixed full of promising youngsters and Welsh Alliance experienced players such as Steven Whittaker and Keenan Downey, proved to be the best of the bunch this season.
They had also fought their way to several cup finals too and it’s a shame they now won’t get the chance to compete for them – but I guess the title is a good consolation prize!
Thomas returned to the club last summer and did a fine, fine job of turning things back around at School Lane. I’m sure that a bright future now beckons once more for the club, particularly with another vastly-experienced coach, Lee Potter, also joining the team recently.