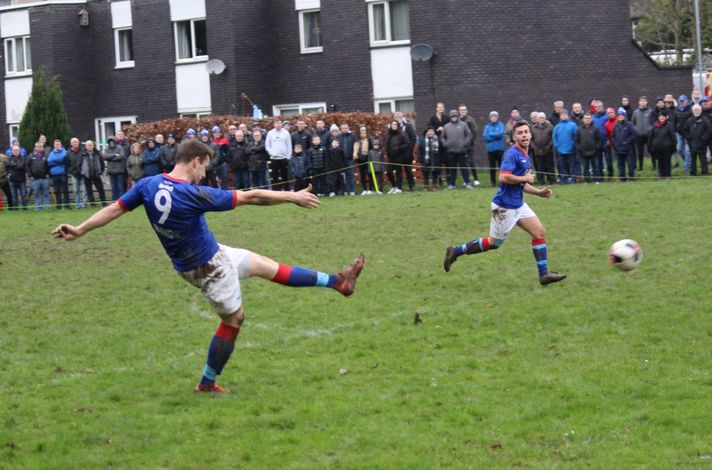 AS EXPECTED, this season’s Gwynedd League campaign (although cut short), was dominated by one team in particular.

Although several others put up a great fight, it was the mighty Bangor 1876 who came out on top as champions of a season that came to an unfortunate early end. However, one suspects that nobody could have stopped them if it had continued regardless – especially seeing as they had picked up 16 wins out of 16.

Here though, I highlight some of the best that both 1876 and the rest of the league had to offer in what is the final season of the GL in its current form before the shake-up of leagues takes place in 2020/21.

Congrats to everyone on a fine season!

MANAGER OF THE SEASON

Has to be only one real winner here. Yes, Jones may have had former top-flight players playing for him this season, but, it’s what he, and everyone else at 1876, done for the whole community of Bangor as a whole that should be highlighted.

Bringing old favourites Les Davies and Michael Johnston in was one thing, but promoting the City’s youth and giving them a platform to showcase what they can do was the real triumph.

The club picked up 16 wins out of 16 in the league alone, scoring more than 100 goals and conceding just 9. But, much more than that, it has brought back a real buzz to the football fans in the city of Bangor and restored some much-needed hope for the future too.

Not many would have expected The Bulls to stampede their way to the top of the league table after having only been promoted from the Anglesey League last season, but that’s exactly what they did.

Richard Owen’s side were dominant in the opening stages of the campaign, beating almost anyone who stood in their way. With 38pts, technically they would have finished second but the Points Per Game system put them 4th behind Nefyn (32pts) and Menai Tigers (34pts) as those teams had played less matches.

Make no mistake though, The Bulls are a force to be reckoned with, and after many years of struggling to get out of the Anglesey League, the one season they finally managed to do so proved they deserve to mix it with the best teams around.

ONE TO WATCH (MANAGER)

What Thomas has done at Tyddyn Paun in such a short space of time really deserves some admiration.

Having left Anglesey League side Cefni, where he was player-manager, he took over at Llangoed in October and results really began to turn around quickly. The mostly youthful side began playing some great football and took points off some big teams in the league too – including Nefyn United.

I’m sure that under former Welsh Premier League Player Thomas’ guidance, and along with top young players who seem to have the right attitude and willingness to learn, the hard-working club has a bright future ahead.

Under normal circumstances, the 30pts they picked up would have seen them finish in fifth behind the so-called ‘big four’ of the division, but again PPG came into play and saw them end up in a still very respectable eighth place in the table.

PLAYER OF THE SEASON

I’M SURE this one won’t come as a surprise to many.

In what can be regarded as his first full season in senior football, DSJ has hit an incredible 41 goals in all competitions for 1876 – who were crowned champions of the division last week after picking up 16 wins out of a possible 16 and scoring 115 goals in the process.

31 of the 18-year-old attacker’s goals came in the Gwynedd League alone, placing him as the division’s top scorer and surely making him the most consistent player throughout.

He’s thoroughly deserving of the title of Player of the Season in my opinion and I’m sure that he will go on to play at the very highest level of Welsh football (and possibly even the English league system) should this kind of form continue in future.

YOUNG PLAYER OF THE SEASON

As DSJ won the Player of the Season, I thought I’d choose a different player for this category and, although there has been several great youngsters on show at 1876 alongside him too – I thought I’d go with one who’s been a star elsewhere.

Cai Penny-Williams, 18, of Bontnewydd was a particular stand-out early on in the season, hitting 15 goals before departing for Llangefni Town Reserves. With that in mind, I’ve gone for someone who’s been consistently great throughout the season.

Midfielder Sam Gregson is still only 16 but has been a regular feature in Llangoed’s starting eleven and has really thrived. The Caernarfon Town Academy star has been a real creative spark for Mark Thomas’ side and has also scored nine goals in all competitions.

For me, he’s one of the most exciting young players around.

It’s important to note that there’s been so many great young players in the division this season who I’m sure will go on to great things in future. From Goalkeeper Shane Owen and brother Leon Owen at Ogwen Tigers to Tom Zalot (Llangoed) and Ally Issa (Bethesda) and the endless stream of talent at 1876, there’s many to keep an eye on.

ONES TO WATCH (TEAM)

The arrival of Sean Brett, who won the division and the league cup with Menai Tigers in 2018/19, at Glan midway through the season was a shrewd appointment and the club began to see turnaround in fortunes.

Add to that the arrival of several top signings such as Bangor Unit student Paris Hargrave and James Ryan from Caergybi and you could see that the good times were slowly creeping back for the club.

Hargrave’s fellow Uni student Brad Bland has been their main driving force this season, picking up twelve goals in all competitions and Hargrave and Ryan have managed eight goals between them in very few matches, so there could be a great partnership forming there too.

With several University students and talented Anglesey and Gwynedd-based players already on the books at the club, could we see Glan return to former glories in the not-so-distant future>

As 1876 have grabbed many of the headlines throughout the season, I thought this was a great opportunity to highlight some of the best of the best from the other clubs in the division – and there have been plenty – but I’ve narrowed it down to a top 10!

Wayne Thomas’ (below) 21-goal haul in all comps this season (20 in league) took him one past the 150-mark for his personal tally with the club. Since 2012/13, he’s scored 153 in total as he also netted two during a brief spell at Menai Tigers in 2015/16. This season was no different for the talented forward as he proved to be Llangoed’s star man once more.

Menai Tigers midfielder Callum Davidson was the main man for them this season, hitting 15 goals and being their creative spark. Full-back Mitchell Jones has also been quietly brilliant throughout and is the division’s highest-scoring defender, as well as the Tigers’ second top scorer in all comps, with 10 goals to his name.

Over at Nefyn, the attacking duo of Dylan Sion Jones and Carl Jones have been in inspired form throughout. Dylan Sion has netted 24 goals in all comps, whilst the prolific Carl has managed 15 in the league and 15 in cup competitions to hit an impressive total of 30 goals.

As mentioned before, Trearddur Bay Bulls enjoyed quite the debut campaign in the GL after being promoted. Justin Williams was a big part of that success. The pacey forward picked up 15 goals in the league and a further 10 in cup competitions as The Bulls secured a top four finish. Another one at The Bulls who deserves some recognition for his efforts is midfielder Iolo Jones (below). Having led the side to Anglesey League title as captain last season, the long-serving and tough-tackling midfielder proved his worth once more in 2019/20 and added more goals to his game too – hitting eight in total.

Prolific forward Jac Thomas once again proved he knows where the goal is fro Bro Goronwy as he hit 21 goals in what was an unusually quiet campaign for the club. Meanwhile, at Llanystumdwy, Darren Parry has once again proven to be there hero with 16 goals to his name in all competitions. Finally, Glyn Tomos has been the hero several times at Talysarn Celts – hitting 13 goals in total as the club secured an impressive fifth place finish.

Numbers in brackets are goals scored in the league only*

Thanks again to everyone who’s helped me along the way this season. Good luck to all clubs in the new league structure in 2020/21!