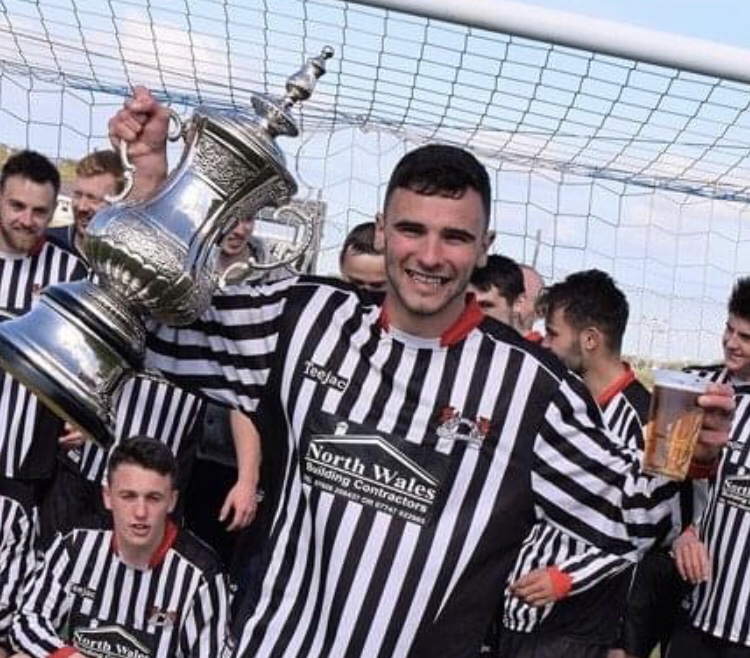 PICTURE by Wynne Evans shows Jordie Murphy of Holyhead Rangers epitomising everything the Sunday League was about!

ONCE upon a time through out Anglesey and Gwynedd, senior football was played on a Sunday morning where a squad of at least 22 men, coaches and managers let their hair down to do something they loved. Hard to believe I know but it is true.

The league at the time was run by Elfed Jones and Merfyn Edmunds and was looked upon as a stepping stone for those lads who could not get into the Saturday clubs already formed in the areas to show what they could do. The real grassroots of football began here, as it wasn’t just players that got their breakthrough in this league, but clubs were formed here too, clubs that later went on to become serious competitors in Saturday League football too.

Clubs such as the likes of Stanley Arms, who later changed they’re name to the mighty Morawelon, gave breakthrough’s to the talents of the likes of Asa Thomas, The Murphy brothers etc. Also formed in the Sunday league was the likes of Aberffraw, who by now ply their trade in Welsh Alliance Two.

The league was looked down on by many as a pub league but for those taking part and running it, it was far more than this and the talent that flew through it’s constantly rotating doors was immense. This league gave the likes of Tom Taylor, Taylor Jones, Graham Jones, Connor Jones, Ashley Jones, David Kyle and Meurig Parry a chance and thats just a handful of the examples of the talents that have all gone on to perform and play in the higher tiers of Welsh Saturday League football.

Another person who began his journey in Sunday league football was Jamie Davies, firstly as a player then by forming a club called Llandegfan Anteolpe himself with the help of Iwan Ellis. The club then ventured into Saturday league football but this was just the beginning for Jamie who, after this venture had run it’s course, went on to coach and manage at the likes of Gaerwen and Pentraeth before eventually landing his a job with Manchester City, where he is currently working with their academies over in China.

Other clubs did fall by the wayside from the Sunday league of course but this was not through poor running or commitments but more to do with the Saturday clubs realising the potential there was in this platform and going on to scout and lure players away from Sunday league clubs. The problem the clubs had was that there was a rule to a limit of the amount of Saturday league players a Sunday club could play, which was increased by the season to help clubs deal with the pull from Saturday league clubs on their prized players.

However, the league could never open the restriction completely as this would destroy everything it stood for (giving the players who couldn’t get a chance on a Saturday a chance to play football). The more the rule was relaxed the less of these players you began to see and the more Saturday league players began to play both days. Clubs by the likes of Penbont, Market, Holland Arms, Pen y Bryn to name a few fell by the wayside, which was a shame to see and eventually led to the demise of this once great league.

This leads me to ask the question then; “Could this planned restructure by the Football Association of Wales possibly see the reformation of the Sunday league?”

The plans would mean that, as of next season, ground criteria (adequate changing rooms, fields etc) will need to be met by clubs for them to even be able to play in the bottom tier in Welsh football, making it seemingly out of reach for many clubs such as Llandegfan and Bodorgan. With the timescale being so short to complete these so called ground improvements (even more so now due to coronavirus), there will be pitches across Anglesey and Gwynedd sitting there with unused facilities which have been good enough to support Saturday football for many years, but are now deemed no longer good enough.

More importantly though, there will be players, coaches and clubs who will be unable to carry on doing the things they love just because they don’t have the financial backing, or in many cases, the time to sort these ground improvements. At many clubs, you may find two or maybe three people in charge who also have a family and their own daily job to perform so the workload is tremendous to try and take the ground improvements on as well.

The Ynys Môn and Gwynedd Sunday League was once a great platform for players and clubs alike to have a breakthrough in the great game we all love to play. This restructure may just be the platform to give it a revival boost and get the development in this area flowing again as each year the amount of lads playing football is dropping at an alarming rate.