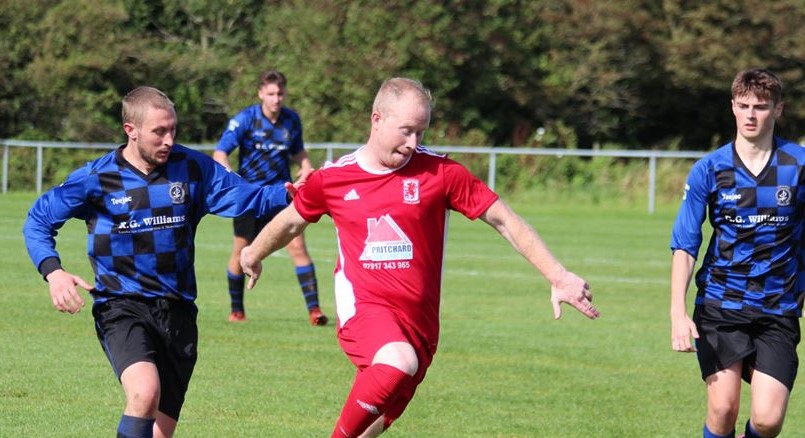 MENTION the name ‘Tyco’ on Anglesey and any true football fan will know exactly who you’re talking about. That is the nickname of Cemaes Bay hero Steven Whittaker and I’m sure it’s enough to strike fear into the hearts of many a local defender.

The 31-year-old is without doubt one of the greatest strikers and one of the most natural goalscorers to have played on the island in recent times, scoring goals for fun wherever he’s gone and at different levels too.

Over the years and aside from Cemaes Bay, Whittaker has played for their arch-rivals Amlwch Town, as well as Bro Goronwy and more recently for a formidable Bodedern Athletic side in the Welsh Alliance, with whom he achieved promotion from WA2 to WA1 just a few seasons ago.

Recently, I spoke to Tyco about his career to date and was surprised to learn he had first started out as a goalkeeper!

He said: “I’ve been kicking a ball for as long as I can remember and I was a GK at under 9’s level, but moved to playing outfield by the time I’d reached the U11’s as our side was pretty good and it became boring playing in net!”

As mentioned previously, wherever Whittaker goes, the goals follow. He scored a personal-best of 42 for Cemaes Bay in 2014/15 before going on to bag 25 for the club in 2016/17 and then 38 for Bodedern Athletic the season after that.

This season, he, alongside many other former Cemaes Bay players, returned to the club as the “old band”, including manager Darren Thomas and assistant Alan Gray, got back together at School Lane.

And it’s no surprise really to see that they’ve enjoyed a phenomenal campaign in the Anglesey League so far. With a wealth of Welsh Alliance experience in the side, as well as a host of promising youngsters, they’ve swept aside most teams this season (I say most, as they have lost a couple of matches to Holyhead Hotspur Reserves!).

And Whittaker has been lethal throughout the campaign too – being on track to beat his personal best of 42 goals by netting 39 in all competitions before the coronavirus pandemic put football on hold.

So, what’s been the highlight for him so far? He said: “It’s all been pretty good going for us so far as a team, but I’d have to say personally scoring four goals to win 4-3 against Hotspur Reserves away (in the cup) was nice.

“There’s still a lot to play for if the current season resumes, but if not, then we will be ready to try again next season. Obviously, if it becomes safe to resume then we would love to win as much as possible this year.”

Over the years, Whittaker has enjoyed numerous great moments with his hometown club, but I’m sure 2014-15 was perhaps the greatest of all from a personal perspective for him. At the Anglesey League presentations, the then-Bay skipper scooped the Alwyn Rowlands Player of the Year and Carwyn Williams Top Goalscorer awards. He also added the Bob Brodie Trophy (island top scorer prize ran by Dave Jones of NWSport) and Cemaes’s Top Scorer, Players’ Player and Supporters’ Goal of the Season awards to his cabinet that year.

The good times are now back at The Bay of course, but what made Whittaker want to leave the higher leagues with Bodedern, where he had been playing very well, to return to his former club last summer?

He explained: “It was great playing and challenging with Bodedern but with three young children now I had to consider the impact of travelling mainly off the island at that level. So, I decided to come back to Cemaes, especially when I knew there was a few lads getting back together there too.

“Over the years, I’ve been fortunate enough to win the majority of leagues ranging from Anglesey League to Welsh Alliance Two. There have been seasons, like the one at Bro Goronwy, where we ended up with four cups.

“I’ve had some great times but I can’t really choose a particular highlight. I’d just say that being fortunate enough to win trophies with your mates. is great as there’s no better feeling. And obviously lifting silverware for your home club is always special as well.”

Asked on whether or not the standard of the Anglesey League has changed in any way since the last time he played in it, Whittaker added: “I’d say so yes, I played as a youngster and it was a really tough-tackling league. The standard probably has dropped from when I last played but that gives clubs the platform to blood youth, which, as you can see across the league, has been very successful for a lot of clubs.”

And speaking talent, of all the quality on show in the Cemaes Bay squad this season, from the likes of former Bro defender Dylan Jones and skipper Keenan Downey, Whittaker was also keen to point out that the young stars who have had the chance to break through in the squad have also impressed.

He said: “I would say immediately this season Josh Griffiths, before his accident, was brilliant, hopefully he can recover and have many more years ahead of him playing football. Dan Jones and Sol Williams have really held their own as well.

“Of all the players I’ve played with over the years, it’s touhg to choose the best, as there’s been so many. Stand-outs would be Sion Edwards in his early days at Cemaes, as well as Sam Carter and Andy Williams (now both at Cemaes) when I was a 17-year-old coming into the first team at Amlwch Town. Alex Jones and Steve Jones at Bro were also great, as well as Jordan Taylor and Aidan Clarke at Bodedern and obviously Keenan Downey, who’s at Cemaes now. They’re all brilliant in their own right.

“In terms of centre half’s I’ve come up against, I’d say Marc Orme and also Dyl Jones who is currently at Cemaes thankfully! Another would be Chris Saxon from my earlier years against those great Llangefni sides.”

Of all the players I’ve watched this season, I would say Whittaker is undoubtedly one of the ones who’s impressed me the most. His higher league experience has told and he’s been a class above, despite missing several games through injury.

AFE: Who would you say is the manager you’ve learnt the most from as a player?
SW: ” Tough one, all through juniors would be Dei Roberts, from Chris Tipton, Nigel Ault, Lee Potter, Ricky Williams and current gaffer Darren Thomas. All really good in their own rights, very successful and not hard to see why.
“Would say in terms of development Darren giving me the captaincy at Cemaes for my first stint back made me a better all round player.”

AFE: You’ve scored some great goals over the years, but which is your personal favourite?
SW: “Easy one this, a goal I scored away to Treaddur Bay a few years back for Cemaes.
“A long ball came in over my left shoulder onto my weaker right foot. I caught it nicely straight into the stantion. Ask Joe Caven he was marking me!”

Thanks for the chat Tyco and all the best to you and Cemaes Bay in future!