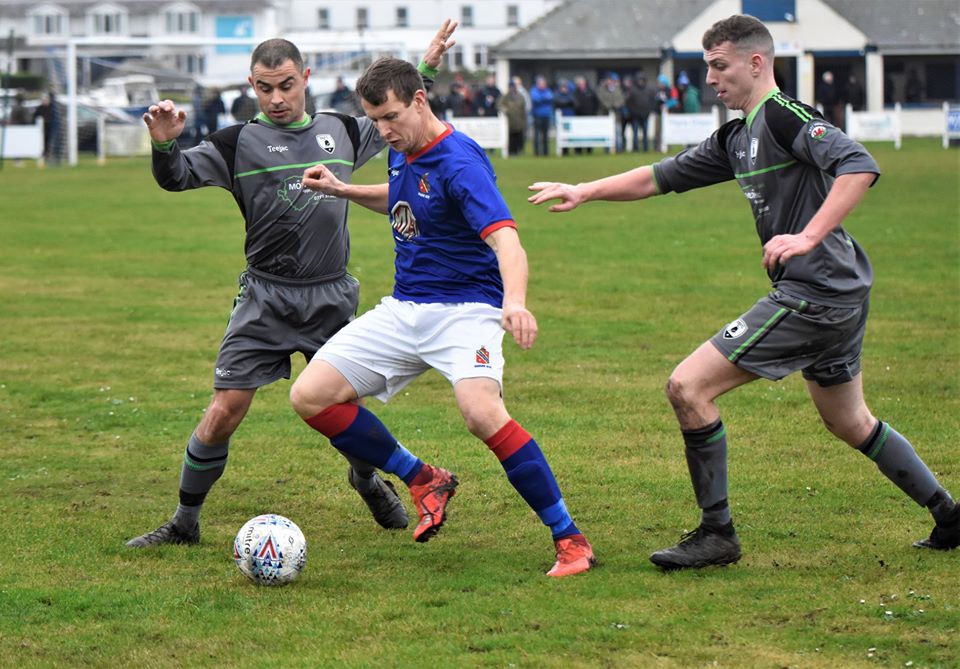 IF YOU were to ask most people around Anglesey/Northern Gwynedd who their favourite Welsh Premier League player of the last decade is; I bet they’d say Les Davies more often than not.

A true Bangor City legend, Davies was part of the 2010-11 title winning side which ended a 16-year wait for The Citizens to be crowned champions of Wales. On a personal level, he is regarded as one of the greatest Welsh Premier League players of all time for his overall contribution to the division – from his great finishing abilities, to his raw power and height up top, he quickly became a notable figure among supporters of all clubs.

He was recently voted as Sgorio’s ‘Player of the Decade’ and was even once on the 32-man shortlist for the ‘UEFA Best Player in Europe’ award (2012), being place on the list alongside the likes of Lionel Messi and Cristiano Ronaldo and putting Wales’ top flight on the map in the process.

The now 35-year-old forward has taken to the field with the City’s “Phoenix club” Bangor 1876 in the Gwynedd League this season – four leagues down to what he’s been used to for the last ten plus years. So what’s the standard been like?

Davies said: “It has surprised me, i don’t know what I expected to be honest, but its a physical league which we’ve had to get used to quickly and the young lads who may not have been used to being kicked and things have had to adapt and they have done that, every one of them.

“I’m proud to share a pitch with every one of them. Treaddur Bay Bulls stood out the most for me – that was a tough game that we just edged in the end.”

Davies, however, will be no stranger to having played on Anglesey’s football fields. He actually started out at Beaumaris Town in the Gwynedd League in the early 2000’s, before going in to Caernarfon Town for a very brief spell and then returning to Beaumaris.

From there, he went on to play for Glantraeth in the Cymru Alliance and it was there he would really catch the eye of even bigger clubs. Bangor City soon came calling for their hometown hero.

He spent 10 years with the club, scoring 76 Welsh Premier League goals in the process. All in all, Davies’ Welsh Premier career has seen him make over 400 starts across six clubs (Caernarfon, Bangor, Porthmadog, Connah’s Quay, Llandudno and Bala Town), scoring 128 goals at the highest level of Welsh football (and a few more in the cups too!). He spent three separate spells with The Citizens.

Scoring at the highest level is one thing; but winning the top flight title is another. Davies says the feeling of lifting the Welsh Premier League (now Cymru Premier) title was a “dream come true”.

The forward added: “With the likes of The New Saints in the league, I didn’t imagine winning it and I don’t think anyone else thought we could do it, but the team we had at the time believed we could beat anyone.”

Commenting on scoring a goal in the final game (5-3 win over Prestatyn Town) at Bangor City’s former home ground – the now demolished Farrar Road – in 2011, Davies said: “There was real mixed emotions scoring in the last game.

“It’s something that will stay with me forever. Scoring goals at Farrar Road was always great, so knowing i wud never score there again was a sad time for me.”

Davies admits that the decision to leave Bangor City for rivals Connah’s Quay in 2015 “was a very tough decision” but added that it “came at the right time” for him.

He says that, of all the goals he’s scored throughout the years – and there has been plenty of great ones (see Sgorio vid below) – his strike against Midtjylland (Denmark) in the Europa League qualifiers meant is his favourite, adding: “Not many players get the chance to play in Europe, never mind score in Europe, so that was a special moment for me.”

And speaking of goals, whilst also fast-forwarding to the present times, Davies has still got them in him. This season, he’s become a leader in the newly-formed people’s club Bangor 1876 and has racked up 27 goals in total, 12 of those in the Gwynedd League. Only Dylan Summers-Jones (41) and Jamie Petrie (36) have more than him.

So, what made Davies want to drop down a few divisions and represent the newly-formed side? He says as soon as he had the call from the club’s management team, “there was no doubt about” where he would be playing in 2019/20.

He added: “With the plan and vision they had, I just knew I had to be part of it. Knowing what the fans gave me for 10 years at Bangor City, I felt I owed it to them to help make this work, because they are the best fans and they deserve all that’s coming from 1876.

“This season has been great. We’re undefeated in the league and we’ve had some good cup runs along with big crowds too. We could not have asked for a better start for 1876.

“I’m very excited about the future as it looks bright and, hopefully, with the board, management, staff, fans and the players we have, we can make it back to the Welsh Premier League soon. I believe that the players we have can definitely play in the top flight if they keep progressing and working hard like they are doing at the moment.”

Some quickfire questions to finish the interview …

AFE: Best player you’ve played alongside?
LD:
“There are too many good players to name but my current team mate Johnno (Michael Johnston, who was also at Bangor City with Davies), is great to play with. He gives everything he has every game and in training and is just great to have around.”

AFE: What about the best player you’ve come up against?
LD:
“That would be Tim Edwards who played for Rhyl. We always had great physical battles and he was just horrible to play against.”

AFE: In 2012, you made the 32-man list of nominees for UEFA’s 2012 ‘Best Player in Europe’ award alongside the likes of Lionel Messi and Cristiano Ronaldo after receiving a vote from a local journalist. How did it feel to see your name on there alongside such big names as those two?
LD: “That was a surreal time. who would have thought a part time player like myself would be on the same list as those greats of the game?”

AFE: Finally, you’re held in high-regard throughout the city of Bangor by now. What’s it like to receive such support and recognition from those who live around you?
LD:
“It’s a great feeling, especially with all the great players that have been around too. I really appreciate the support of the fans from all around.”

Cheers for the chat Les and all the best to you and 1876 in future!