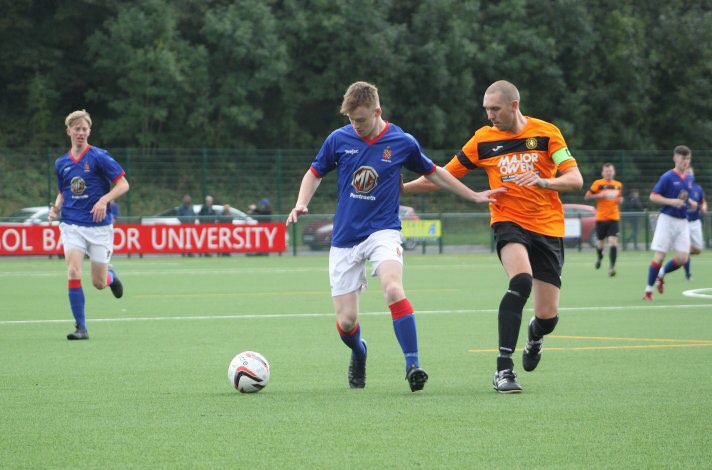 I AM fairly confident in saying that Dylan Summers-Jones has been one of the Players of the Season throughout the whole of North Wales during 2019/20.

Despite being only 17-years-old, he’s absolutely bossed it in the Gwynedd League for the formidable Bangor 1876 side, alongside far more experienced players.

In what can be regarded as his first “proper” season of senior football (he did make a few appearances for Bangor City’s first ream last season), the attacker has scored a very impressive 41 goals in all competitions – making him the club’s top scorer.

As a youth player, Summers-Jones represented Llangefni Town, Llanfairpwll and Bangor City Academy. So where did his love of football come from?

He explained: “I remember I was always playing football with my Dad in the garden as a kid, where we wouldn’t stop for hours. I also played with my mates in primary school, we all used to go to ‘Kick It’ sessions and I was told there I should go and train with Llangefni Town. That’s how it all started!”

This season, Summers-Jones has had the opportunity to play alongside the likes of former Welsh Premier League winners Les Davies and Michael Johnston, who were of course highly influential figures at Bangor City back in the day.

That influence has continued on into the new era with Bangor 1876, with Johnston now captain of the club and Les Davies having notched up 27 goals in all comps. Another experienced star in the team is winger Jamie Petrie, who’s not far behind Summers-Jones’ goals total for the season having hit 36 himself.

“Johno (Michael Johnston) will come up to me at half time and advise me on how I can change my game to have a bigger impact, and I make sure I take it all into the second half because he, as a defender, will know what’s hard to defend against, and will make sure I am as much of a nuisance as possible for the opposing defenders.

“Playing in the front line with Les Davies and Jamie Petrie speaks for itself really. I make sure I take in every piece of advice they give me as they have been playing at a high level and I hope by them passing their experience onto me I can go on and achieve the same and become a better player for the team.

“Every footballer wants to play and test themselves against the best players and to play to the highest standards too. When I hear Les, Johno, Pets and Iwan (Williams) telling stories about playing in big games, I’d love to have a chance to follow in their footsteps. I would like to go as far as possible with Bangor 1876, winning many trophies along the way.“

Many will know by now that Bangor 1876 is a phoenix club formed by the fans, for the fans, following the Vaughan debacle at Bangor City Football Club spurring supporters on to take matters into their own hands.

And it’s been a real success story so far. The club is currently top of the Gwynedd League table, are unbeaten in the league, and are still alive in all of the cup competitions that come with being in the division and also the Junior Cup. With football having been suspended for the time being, one can only hope that they will eventually have the chance to clinch that silverware they deserve.

Commenting on his journey with the club to date, Summers-Jones added: “I have enjoyed playing for 1876 from the off, every game brings different challenges, the managers and coaches will work on tactics in training upon the build up to the games which I like.

“My highlight this season so far was the first ever game for Bangor 1876 vs FC United of Manchester. The atmosphere there was amazing and it was made an even better day by meeting the fans.

“Another highlight is the Welsh Cup game vs Penycae, where Mathew Lock scored with the last kick of the game to take us to extra time, which then lead to penalties and us winning the match

“From the very first game it fills me with pride to put on the 1876 shirt on because I know what football means to the people of Bangor.”

He added: “I would like to add as well a big thanks to Gerald Beardsmore for how much he helped develop me as a player since I played under him at Llangefni he was a great coach.

“I would also like to thank Mart Bach for developing me as a player at Llanfair Celtaid, as a team we won so many trophies domestically and many tournaments.

It seems as though Summers-Jones is a very level-headed young man and that is a huge quality, in my opinion, in determining just how far a player can go in their career. His willingness to learn could set him apart from peers in years to come and I’d tip him for great things but time will tell.

To close the interview, I asked DSJ a few quick-fire questions as follows:

2. Best player(s) you’ve come up against?
“Jordan Piggott (Bangor City), Ilan Hughes (Ruthin Town) and Anthony Dunleavy (Penycae). Also, the Manchester City academy defenders when we played against them with Bangor Academy both times.
“Each team had good players when we’ve come up against them this season but one that stood out for me is Carl Jones from Nefyn, a very good all round player.”

3. Best ground you’ve played at?
“Would have to be FC United of Manchester’s ground because of the amazing atmosphere on the day.”

4. Best goal you’ve scored this season?
“My first one against Bontnewydd is the one I enjoyed most. But as a team the best one is the one against Sychdyn where we started from Leon in goal and passed the ball forward up the pitch and it finished with a tap in from myself at the front post to complete my hat trick, that was an amazing team goal as every player played a part in it.”

4. If you could choose one pro footballer to be – who would it be and why?
“Gareth Bale, I like his playing style on the wing, he’s rapid, good with the ball, and can change a game instantly. He also represents Wales in International football which makes it even better.”

Cheers for the chat Dylan and all the best to you and 1876 for the rest of the season if and when it returns!