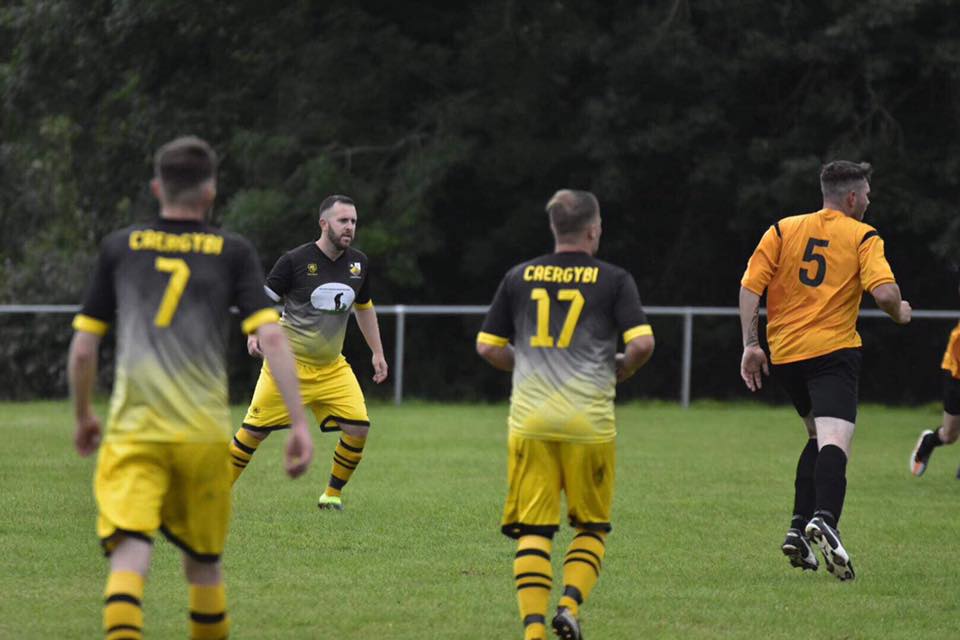 Just the 15 goals scored the last time these two sides met, with Town claiming their first (and so far only) three points of the season with a stunning 7-6 win.

Asa Thomas (who was playing for the first team at the time before its demise) played and scored two in that game but he has now moved on to Holyhead Hotspur. Town have however managed to snap up former hero Tom Hadley from Trearddur Bay Bulls. The tricky forward could be very effective and will be one to watch upon his return.

Bodorgan have lost centre back Kieran Murphy to Llangoed this week, which could be a big blow for them. However, they have recently been boosted by the returns of both Iwan Parry (Aberffraw) and Danny Connolly (Pentraeth) to the club.

This should be another great game between the sides.

Cefni held Rnagers to a 3-3 draw last time out and looked the better team during that match too.

Since their huge eighteen point deduction they’ve well and truly gone on a rampage, picking up three points left, right and centre are now back in credit with one point on the league table.

Ben Wright will look to control the play in the middle for Cefni and has been in very good form of late, bagging seven goals too.

Rangers are still the only unbeaten side in the division this season and have looked very hard to break down at times. David Aaron Jones, Simon Kay and Sam Williams have been three crucial players to their side this season.

With two strong defences on show it will be very interesting to see who comes out on top in this encounter.

Two teams that are yet to play each other this season but this is a game that will be of high importance to both.

Danny Jones and Paul Matier’s Pentraeth side have picked up just ten points so far this season, which will no doubt be not up to their usual standards. They have lost centre back Bradley Pickavance to Bethesda during the January transfer window, but the recent acquisition of Luke Winter from Bodorgan was a great one.

Llanfair, ran by Spud Thomas and Vinny Walker, have enjoyed a more-than decent campaign. With a predominantly young squad, they’ll be looking to crack the top four come the end of the season, having already claimed 23 points to date.

They have lost goalkeeper Connor Hughes to Holyhead Hotspur, but 16-year-old Carwyn Hughes has looked good since stepping up in his place. Striker Tom Zalot has also returned to former club Llangoed and winger Elliott Jones is still sidelined with injury.

Very much a game that both sides can win – will most likely come down to who wants it more on the day.

Two of the GL’s most exciting teams will go head to head in this encounter at Tyddyn Paun.

Llangoed have made massive improvements under Mark Thomas, who was appointed manager in October. Since then, they’ve been climbing their way up the league table and playing some great football along the way too.

Nefyn, as always, have been a formidable force too. Carl Jones has led the line for them in terms of goals and they look solid defensively too having conceded just ten goals in as many games this season. A win in this one could take them as high as third if other results go in their favour (although they do have games in hand over teams above them too).

Llangoed have, more often than not, looked good on home soil but The Penwaig will be a difficult team to stop. It could be a great match to watch for the neutral.

Final match on the list sees 10th place take on ninth place in the table.

Cybi, who were promoted from the Anglesey League in the summer, have had a steady start to the campaign – picking up four wins, four draws and five losses. A win in this crucial tie would see Dale Moffat’s team go level on points with the visitors (19) with a game in hand.

Striker James Ryan could be the key to a win but with several new signings in their ranks including the prolific Gary Jo Owen and the reliable Tom Roberts, its fair to say they’ve been boosted greatly.

Waunfawr have had a similar season of mixed results with six wins, one draw and seven losses so far. Meurig Parry and Rhodri Owen have often been the game-changers for them.

This one is an important match for determining where both sides will finish come the end of the campaign.