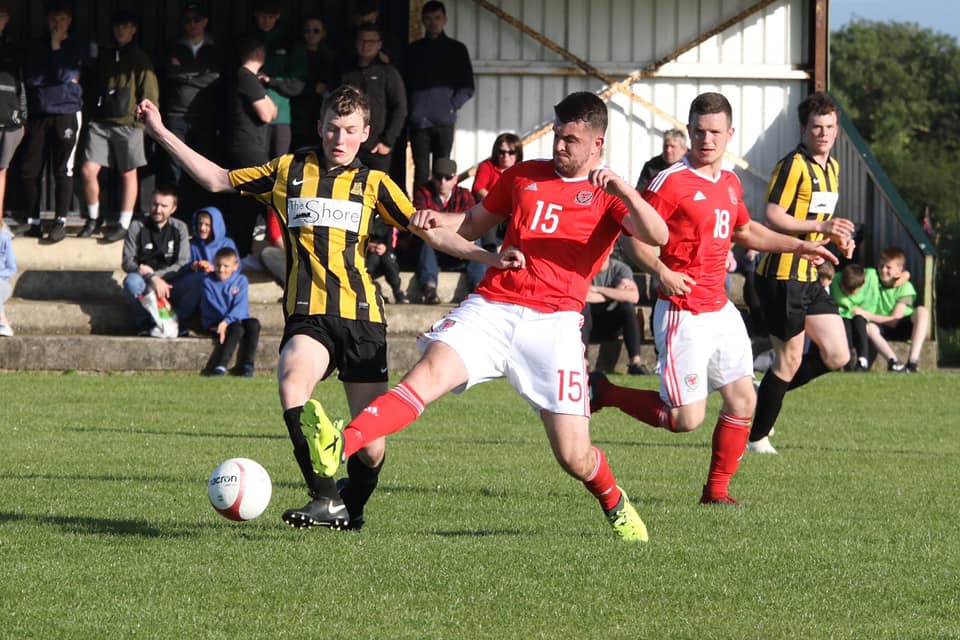 THEY might be the Anglesey’s bottom side at the moment, but in the past, Llandegfan has been a club that has nurtured some of the best talent around.

Before it folded in 2014 (and re-emerged in 2017), the club was well- followed and enjoyed some success – particularly under the guidance of Jamie Davies (who is now a coach for Manchester City over in China).

Here, I pick out just ten of the players who have gone on to great things since leaving Lon Ty Newydd all those years ago …

Part of the gold-medal winning Ynys Mon Men’s side during the summers Inter Island Games Football Tournament held on Anglesey, Clarke is a tall and commanding centre back/central midfielder.

He played for Llandegfan in 2009 and then went on to play for English Football League side Oldham Athletic’s youth sides.

He later returned to North Wales, playing for Bangor City’s academy, Colwyn Bay, Porthmadog, Glantraeth (where he won a league and double) and Holyhead Hotspur. He is now at Conwy Borough, having moved to the club in the summer.

His cousin Alex is captain of the current Llandegfan team.

Another member of the Ynys Mon team who won gold over the summer, Jones played for Llandegfan in 2010.

He’s a defensive midfielder who has played for Bangor City’s academy, Llangefni, Menai Tigers, Gaerwen and Bodedern Athletic. At Boded – he became their Player of the Season in 2018/19 for his tireless efforts in the heart of the midfield.

He is now alongside Clarke at Conwy Borough, where he is again impressing.

The now long-serving midfielder at Gwynedd League side Bro was on the Llandegfan books between 2009 and 2011.

Since moving on to Bro he’s had many successes – including the most recent NWCFA Junior Cup final win over Bryngwran (now Trearddur Bay) Bulls – last season in which he scored.

He’s one of the most underrated midfielders in the Gwynedd League in my opinion and can really be the difference for Martin Jones’ side on his day.

Journeyman shot-stopper who played for Llandegfan in 2010.

Lewis is well-known across Gwynedd and Anglesey having turned out for Llanfairpwll, Beaumaris, Pentraeth, Llangoed, Arriva Bangor and Menai Tigers – who he returned to in the summer.

Has now established himself as The Tigers’ number one in the Gwynedd League.

Former Welsh Premier League player for Cardiff Met University and Bangor City, who was part of the Ynys Mon gold-medallist team over the summer.

Littlemore is, I’d imagine, the only Llandegfan player (who he represented in 2010) in recent memory to play and score in the highest division of Welsh football – thus arguably making him the most successful too.

Upon completing his degree at Cardiff Met, he returned to North Wales to play for Holyhead Hotspur where he again became a regular scorer.

He is now playing for Cymru North (second tier) side Porthmadog.

Another highly talented player who played at Lon Ty Newydd in 2010.

McGivern, who now plays as a midfielder for Amlwch Town, has previously played for other big clubs on the island including Holyhead Hotspur and Cemaes Bay.

He’s been an important player wherever he’s gone, both creating and scoring goals on a regular basis.

Another one from the 2010 crop of players and another one who represented the Ynys Mon team over the summer.

Owen is a highly-reliable full back who has become a fan favourite at Cymru North side Llangefni Town during his time there.

Before he arrived at Cae Bob Parry, he had been part of successful sides for Menai Tigers and Glantraeth.

Gwynedd League teams will know Thomas as one of Llangoed’s main men. He spent time at Llandeg between 2009 and 2011.

Having previously represented Menai Tigers in the past, the midfielder/forward has become a standout at Tyddyn Paun.

He’s put in several Man of the Match performances for the club over the last few seasons and has remained loyal to the club.

Main man for Pentraeth in Welsh Alliance Two last season as he bagged 12 goals and currently on fire for Gaerwen in the same division, hitting eight so far.

He represented Llandeg way back in 2009 and went on to play for other clubs including Menai Tigers, Llangoed, Llangefni, Llanfairpwll and Llanerchymedd.

Williams is a great finisher and has bagged goals wherever he’s gone.

Back to Pentraeth once more and the focus is on one of their key players this season this time.

Midfielder Hughes was at Llandegfan between 2009 and 2011 before going on to play for Llanfairpwll and then Pentraeth who he has been with since 2015.

Has bagged three goals in what has been a tough start to the season for Pentraeth in Welsh Alliance Two so far this year.