Often times, when a club starts out on its journey into the footballing world, it can take awhile for it to find its feet. This was not the case for Caergybi however.

Having formed in the summer of 2017, the club entered the AL immediately for the 17/18 season and had a more than decent campaign under manager Dale Moffat.

Here, I take a closer look at how things have progressed at the club in the space of nearly two years.

As mentioned, 2017/18 was Caergybi’s debut campaign but they certainly didn’t struggle to attract big name players.

With three other clubs (Holyhead Town, Holyhead Hotspur and Hotspur Reserves) based on Holyhead, it seemed easy for Caergybi to bring players in as it presented a new challenge within the Town.

Prolific forward Gary Jo Owen, who had previously played for the likes of Morawelon and Gaerwen and his brother Liam Patrick Williams were marquee signings for Cybi and others would prove to be quality players too as the season went on.

They went on to finish fourth in the league in their very first season and won the Megan Cup with a 3-2 win over Bryngwran Bulls in the final (picture above).

Gary Jo ended up as the league’s top scorer on 58 goals, brother Liam bagged a whopping 74 assists and captain Dewi Thomas and wing duo Glenn North and youngster Kurt Harris, now at Llandegfan, both hit double figures during a memorable debut campaign for the club.

James Ryan has been unstoppable this season. PICTURE: Trevor Owen.

Cybi have continued their progress as a club during 2018/19 and have added even more quality to their ranks.

James Ryan came in from Bryngwran Bulls in the summer after hitting 54 goals for them last season, before Gary Jo left Millbank, returned and left once again last month for Holyhead Town (Welsh Alliance Two).

Ryan is leading the pack in terms of Anglesey League goalscorers this season and with an incredible 68 goals to his name, it’s fair to say that he’s been formidable.

Caergybi themselves are still in with a shout of winning the league, sitting in third place (on 39pts) and just two points behind leaders Arriva Bangor with three HUGE games coming up for those two and Bryngwran Bulls. They are also into the Dargie (v Bulls) and Lucas Oil Cup finals (Bulls/Hotspur Res) and so they look destined to win some sort of silverware once again this season.

Cybi’s squad is without doubt one of the strongest on paper. So good in fact, that some of their top, top players have been left out of the starting eleven at times this season.

As mentioned before, James Ryan is the main man, but it’s the players around him who have created the space and the chances for him to score those goals.

Confidence comes from the back within Dale Moffat’s side with goalkeeper Kieran Weeks being one of the best in that position that the division has to offer. Defender-wise they have Casey Williams, who’s great at keeping the ball, brother Liam Williams who is another confident player, Colm Foley who’s solid throughout and the workhorse that is Marcus Bell. Add to that the likes of the experienced Barry Roberts, determined Ashley Beck and the talented Jordan Rowlands and you have several options in there. 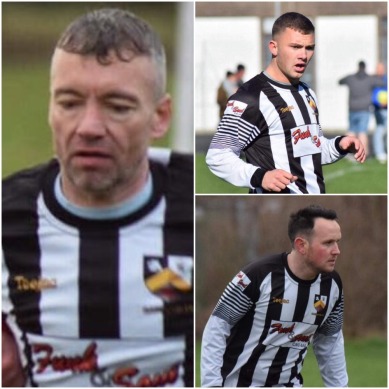 The midfield is the main weapon for Caergybi though. Former Trearddur Bay man Dave Webb (below) has contributed 12 goals and has been brilliant at setting up counter attacks, as has fellow former Trearddur star George Hibbert. Captain Dewi Thomas has popped up with 10 goals despite not playing as often as last season and the brilliant Luke McKittrick has worked tirelessly in the middle of the park. 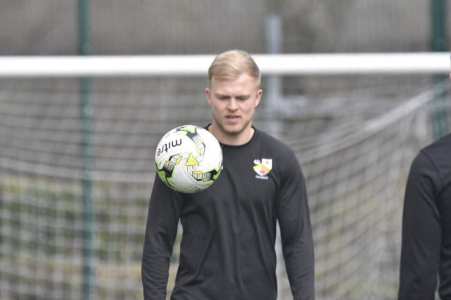 Attacking-wise, aside from Ryan, Justin Williams, who bagged 36 goals for Valley last season has scored eight goals this time around, despite being injured for a few months. Winger Glenn North has hit six too. 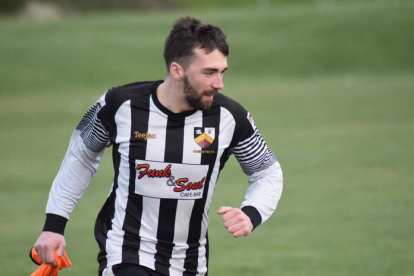 One man has really stepped up during Caergybi’s title charge this season and that’s the aforementioned McKittrick (above).

The central midfielder’s fighting spirit has really shone through during this campaign and his work rate has been incredible. The 24-year-old has made a case to be one of the very first name’s to be put down on Moffat’s team sheet this season, there’s not doubt about that.

Aside from him, I would be quick to praise Marcus Bell too. The centre back has been quietly brilliant since signing on at Millbank with some solid performances and has even scored four goals. The versatile Ashley Beck is another one who works his socks off and has played in a number of different positions. 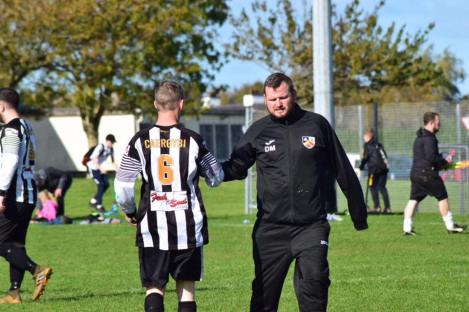 Dale Moffat seems to be a coach who really knows the game well and that has been clear to see in the way that his starting elevens have been set up this season.

With a quality goalkeeper and solid defence who are comfortable on the ball, it’s allowed Cybi’s midfield to run riot at times this season and with a striker like James Ryan playing up to, you’re always guaranteed goals when you create the chances.

Alongside his assistant, James Jones, Moffat is steadily building something really special at Millbank in my opinion and long may it continue.