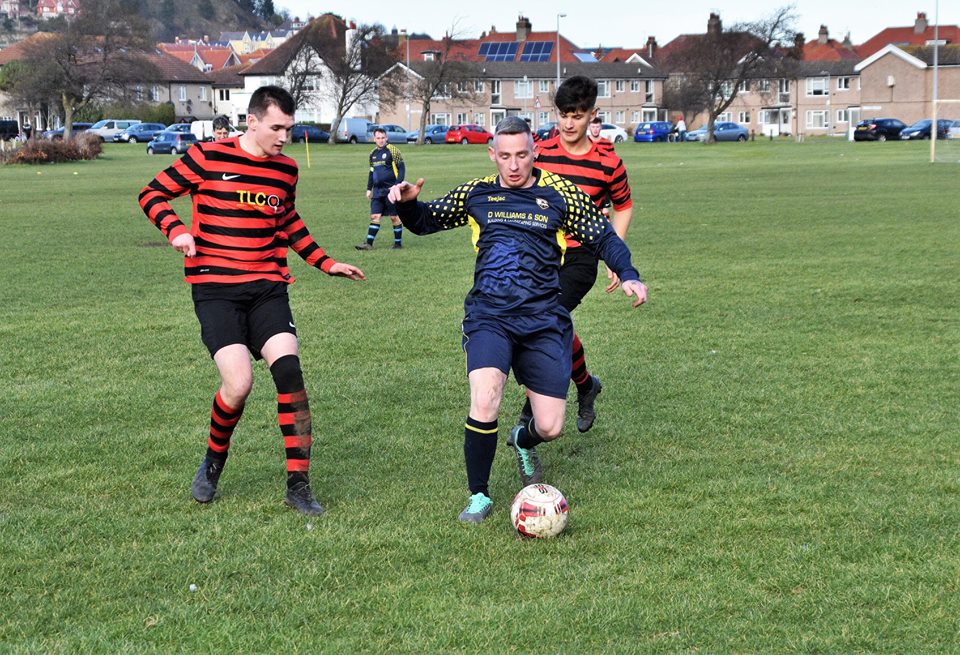 PICTURE by Wynne Evans shows Matty Roberts of Bryngwran Bulls on the ball against Llandudno Athletic.

Richard Owen’s Bulls marched their way into the final eight following a tough battle against a very worthy opponent in Athletic.

Bryngwran found their feet early on, scoring two goals in the opening ten minutes of the game. Top scorer Craig Moore netted his 42nd goal of the season (in just 19 matches) before winger Matty Roberts notched his twelfth goal of the season with a fine left foot finish.

Llandudno looked stronger in the second half but despite pulling a goal back just after the hour mark, they couldn’t find the equaliser and The Bulls progressed to the last eight of the cup.

Mike Kelly’s youthful Hotspur Reserves side also found their way into the Quarter Finals thanks to a fine performance against Bro.

Deian Parry fired in his 11th goal of the campaign and Tom Scott also bagged as The Reserves kept a clean sheet an looked impressive throughout the match.

Kevin Jones’ team came from 2-0 down to stun Y Glannau and book their place in the next round.

The Busmen produced an almighty comeback thanks to top goalscorer Scott Hughes – who is now on 48 goals for the season – and commanding midfielder Mark Williams who bagged a brace.

The win sees them set up an all-Anglesey-League Quarter Final against Bryngwran Bulls.

Holders Nefyn are out of the Junior Cup following a thrilling contest against Llanfairfechan. The Penwaig, who lifted the trophy last June after beating Bontnewydd in the final, were dumped out of the cup in Extra Time.

After going 2-0 down in the first 15 minutes, Llanfairfechan fought their way back into the game very well and never gave up – even going 3-2 up before the game went into Extra Time at 3-3 after Nefyn equalised with the last kick of normal time.

Iwan Jones proved to be the match winner in Extra Time, scoring a wonder goal to knock the holders out and win the game for The Fechan.

Fellow Gwynedd League side Bro showed Nefyn how its done with a fine victory over Rhuddlan. After a closely-fought and scrappy first half, it was the visitors who eventually took the lead through Corey Taylor just minutes into the second 45.

Bro showed real spirit to come back into the game the way they did though and equalised three minutes after Taylor’s goal when Andy Williams slotted in at the far post. Jac Thomas then ran clear and scored for 2-1 before Jamie Jones made it three from the penalty spot.

From there on out, Bro were cruising and it was soon 4-1 when Taylor Jones netted. Another strike each from Thomas and Williams settled the scoreline and set up a Quarter Final tie against Hotspur Reserves.

Bro’s perfect afternoon was capped off with the return of Rui Silva to the Cae Nerys pitch. The midfielder has been absent recently after he was admitted to hospital after being assaulted on New Year’s Eve. Good to see him back!

Gwynedd League title-chasers Menai Tigers hammered a team that has only conceded three goals in their own league during 2018/19.

Sion Hogan was the hero of the day with a stunning hat-trick and top scorer Dean Redmond, Shaun Lock, Callum Graves and Dafydd Healy added the others as Sean Brett’s side maintained their formidable form and kept their cup hopes alive.

Anglesey League top scorer James Ryan bagged yet another hat-trick and took his tally for the season to 58 goals as Dale Moffat’s side inflicted Cemaes’ heaviest defeat of the season.

Bouncing back from their 3-1 defeat to Llanfair last week, Cybi came out of the blocks quickly, scoring their fist goal within 10 mins when returning striker Gary Jo Owen, who re-signed from Holyhead Town last week, provided an assist for Ryan. Five minutes later Owen himself was on the score-sheet and Ryan hit another before half time.

In the second half, Ryan completed his treble before midfielder George Hibbert made it 5-0 with a long range effort which flew in over the keeper. Nathan Williams came on to make his debut for the club and scored not long after and Hibbert grabbed a second to complete the scoreline.

Llanfair made it three consecutive wins in the league thanks to a spirited performance. Following on from victories against Llandegfan and Caergybi, Spud Thomas’ side battled hard in this one to secure the three points.

Sion Emlyn Davies had put the visitors in charge heading into the second half. However, Pentraeth captain Tom Jones equalised early on into the second 45. That lead lasted just seconds however as Steve Smith, now in his fourth separate spell with Llanfair returned once again to bag a goal which would go on to be the winner in this one.

The win sees Llanfair move up to seventh in the table on 21 points. Not bad for a team who, just a month or so ago, looked destined to finish second-bottom of the table.

The Anglesey League never fails to amaze and this match was proof of just that as Bodorgan fought back from 5-2 down to secure a valuable point via a memorable scoreline!

Goals from Paul Williams (2), Andrew Bailey, Marc Wilson and a stunner from Jack Peters put the home side in charge of the tie. However, striker Luke Allaway, who has just re-signed for Bodorgan from Aberffraw, led their comeback by bagging two before Aron Edwards, Sam Hallas and Ashley Jones turned the tie around in dramatic fashion.