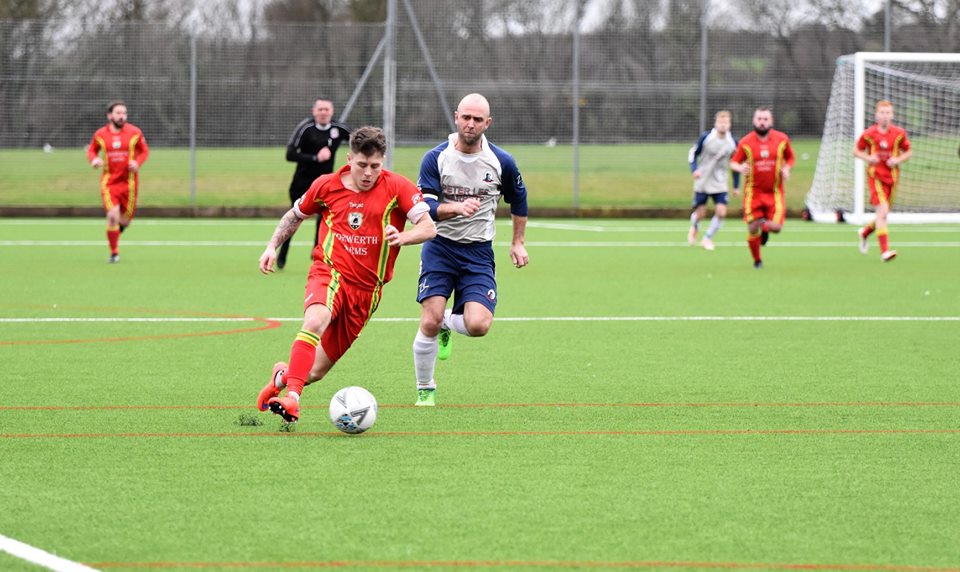 PICTURE by Wynne Evans shows Craig Moore on the ball for Bryngwran Bulls.

Just the 15 goals to talk about in this one in what was truly a crazy game of football.

It was initially a dream start for Llandegfan when debutante Mark Wayne, signed from Cefni just two days earlier, smashed home an incredible free-kick from 35 yards out. However, the dream quickly became a nightmare once again for Arron Evans’ side when two quick goals (Andrew Bailey and an own goal) saw Valley turn the game around.

Incredibly, the home side eventually cruised into half time with an 8-2 lead thanks to further goals from Mike Williams (2), Andrew Bailey, Mark Owen (2) and Ant Parry. Josh Morrini had pulled one back just before half time for Llandeg, reacting quickly to a mistake by the Valley keeper and finishing well.

Credit to Llandeg, they kept pushing on despite an irreversible scoreline and were rewarded when striker Dave Parry, playing his final game of the season before undergoing a foot operation, finished from out wide with a great strike.

There was then a period of around 25 minutes or so before another goal came. Andrew Bailey missed a penalty before Mike Williams missed a glorious chance to complete his hat-trick from just three yards out before he eventually went onto do so from another awarded penalty. Andrew Bailey also completed his hat-trick before an own goal and a strike from Dion Evans completed the rout.

Kevin Jones’ side cruised to a comfortable win over Bod to progress to the next round of the Lucas Oil Cup.

The Busmen will now face a home tie against in-form Caergybi in the semi-final stages of the competition.

Anything Arriva can do, Caergybi can do better at the moment, it seems as they put Llanfair to the sword on Saturday afternoon with a crushing win to see them into the semi-finals.

Anglesey League top scorer James Ryan maintained his incredible form of late by hitting eight goals in this one, taking him to 49 – just five shy of his tally for the whole of last season. Both Dewi Thomas‘ (the winger and captain) bagged a goal each and Rikki Jones also scored as Dale Moffat’s side ran riot.

An away trip to Arriva now looms in the semi-finals in what should be a great match.

Richard Owen’s side also booked their place in the final four thanks to a fine second half performance in Llangefni.

Wingers Matty Roberts had put The Bulls ahead early on in the game, but Cefni midfielder Ben Wright scored a fine chipped goal to see the game go into the break all square.

Bryngwran turned on the style in the second half though. Top scorer Craig Moore made it 2-1 soon after the break with a great volley, before midfielder Nik Kontodios added a third on 68mins. with just eight minutes remaining, it was four when Roberts added his second of the game. It was Gwynfor Owen who well and truly finished the game however, tackling two players before firing home a shot from 35 yards.

The Bulls will go on to host Hotspur Reserves at home in the semi-finals.

Another thriller here and yet again, plenty of goals involved. Hotspur had found themselves 3-1 up at half time thanks to goals from Deian Parry (2) and Casey Gregg.

Pentraeth showed great spirit to find a way back into the game however and managed to take the tie to Extra Time thanks to goals from Kenny Williams (2) and Tom Jones. There was more drama during that period too as the game saw two more goals fly in but still nothing to separate the two teams. 4-4 and penalties loomed.

Mike Kelly’s side eventually came out on top as 3-2 winners in a tense penalty shoot-out. They will now face a tough test in the final four against Bryngwran.

Sean Brett’s side continued their unstoppable form this season with a routine win over Llangoed.

Top scorer Dean Redmond opened the scoring on seven minutes with his 25th strike of the season. Things could have been so different for the visitors on the day if they had gone their way but they didn’t – Menai goalkeeper David Clarke saved a penalty on 11 minutes and that was a defining moment in this one. Man of the Match Callum Graves made it 2-0 just before half time.

In the second half, defender Dafydd Healy put the game to rest on 55mins before Sion Hogan made it 4-0 on 70mins. The scoreline was completed in the 85th minute when Hogan bagged a second.

The result sees Menai unbeaten in their opening 12 games of the campaign, having conceded just 12 goals and sitting four points clear at the top. Llangoed’s loss means that there is now a seven point gap between them and third placed Glantraeth, who picked up a win at Mynydd Tigers.

Mynydd’s Gwynedd League woes continued as they fell to a heavy home defeat at the hands of Glantraeth.

Last season’s Anglesey League champions have picked up just seven points in their opening ten games of their new campaign and are sitting in 10th place (out of eleven).

Glantraeth on the other hand are flying, having only recently reformed as a side. Experienced forward Andy Clarke is leading the line very well for them, having picked up another four goals in this match.

Dion Williams and Tim Evans were also on the score-sheet as Glantraeth kept the pressure on Gwalchmai and Menai Tigers. They now sit in third place on the table.

Bro put in what was arguably their performance of the season with a stunning win over Nefyn. Having endured mixed results so far during 2018/19, Martin Jones’ side finally showed the quality that everyone knows they possess on their day in this one.

Nefyn have walked away from Cae Nerys as winners in the past two seasons, but this time around it was much, much different. Trusted goalscorer Andy Williams fired Bro in front early on before assisting Tom Wood who netted their second.

One of Nefyn’s recent signings did well to pull a goal back for his side- Carl Jones netting a great curling free-kick. However, celebrations were short lived for United as Andy Williams pounced once more to make it 3-1 to Bro at the break.

In the second half, promising young forward Jac Thomas made it 4-1 when he latched onto a long kick from goalkeeper Johnny Sweetser-Hawkes to head past Gwion Roberts in the Nefyn goal. Soon after it was five, when soon-to-be Man of the Match Williams struck again, this time with an absolute screamer to bag his hat-trick.

Tom Wood set up Bro’s sixth goal of the afternoon when he found Thomas‘ run, with the latter subsequently netting his second of the game with ease. Thomas then completed his hat-trick soon after with a thunderous strike for 7-1. Nefyn had the final say on the scoring when Carl Jones struck again with what was a mere consolation on a forgettable afternoon for the Penwaig.