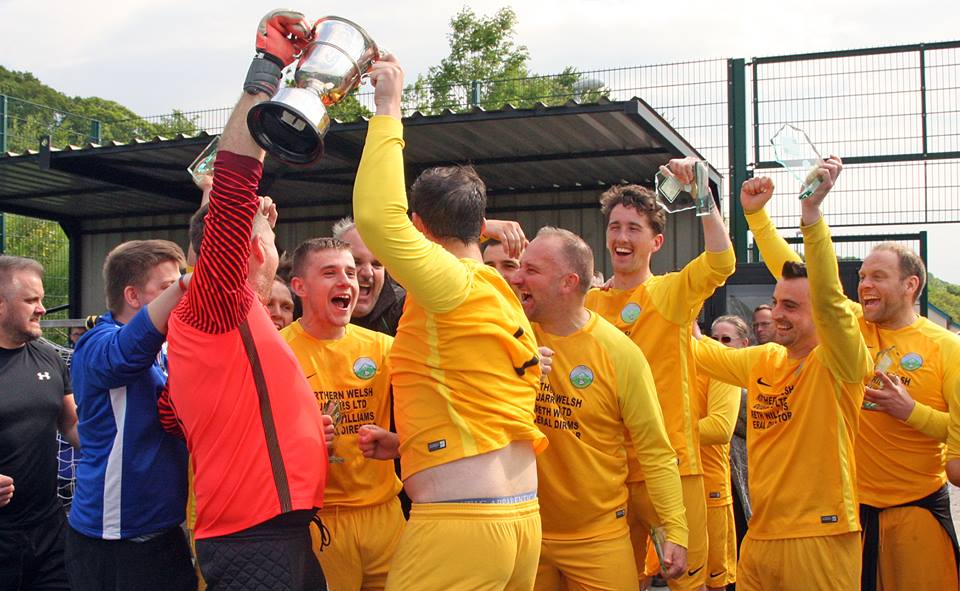 I THINK we can all agree it’s been a fairly entertaining Kon-X Anglesey League this year hasn’t it?

Plenty of goals, some drama and endless leapfrogging of teams in the table made it a campaign to remember. Here, I do my best to breakdown some of the highlights that have taken place along the way. Enjoy!

STORY OF THE LEAGUE SEASON

It was newcomers Mynydd Tigers who eventually took the title on the very last day of the season, pipping Bryngwran Bulls to the post to be crowned champions.

Mark Hughes’ youthful side, which has featured 10 players under the age of 19 during the course of the season, may have lacked in experience at times, but they certainly more than made up for that in the quality they showed – especially with their slick, counter-attacking style of play.

The title was decided on Saturday, May 26 when Mynydd beat Brywngwran Bulls 4-2 on the 3G pitch in Bangor thanks to goals from Herbie Hofsteede (2), Mike Holroyd and Tomos Eames. Anything but a Tigers win would have handed The Bulls the title but Hughes’ side put in a brilliant performance on the day to become the first team from outside of the island to win the division since 1921. It was also the first time in six attempts that Mynydd had beaten Bryngwran this season (having lost the other five, including in two finals).

Despite their final day blip though, I have to say that The Bulls have been phenomenal at times this season and Richard Owen has certainly put a very strong team together. It’s little wonder then that they ended up winning a cup double this season.

Elsewhere in the league – there were great debut seasons for Caergybi and Arriva Bangor too as they finished in fourth and fifth place respectively. Valley Athletic finished in third (on goal difference) after a difficult spell in the second half of the campaign.

Llangoed Reserves (who lost a lot of players to the first team) finished in sixth, whilst a much-improved Bodorgan side finished in seventh. Pentraeth Reserves endured a tough season this time around and ended up in eighth, without winning a single home game all season.

Llandegfan’s nightmare run continued on into the second half of the season, finishing bottom of the table with just 3 points – although they did win a Cup match against Pentraeth Reserves (6-2) during that tough spell. They’ll certainly be looking for a fresh start during 2018/19.

The gap between the “Big Four” (as well as 5th and 6th) and the rest of the division proved to be a huge one and it was almost a tale of two tables come the end of the season.

THE STORY OF THE CUPS

The Lucas Oil Cup was decided first when Bryngwran Bulls humbled Mynydd Tigers with a 3-0 win at Bangor City’s Nantporth Stadium at the beginning of April. Top scorer James Ryan (2) and winger Matty Roberts with the goals to hand them the trophy.

Fast forward a month later and the two would meet again in the final of the Dargie Cup. Although it was closer this time around, it was Bryngwran who would be victorious once again to claim the double. Wisdom Janes had fired the Tigers in front but a Hari Jones goal took the tie to Extra Time and that’s when Nathan Lewis capitalised on a defensive mistake to win the Cup for The Bulls.

On May 4, two Cup final debutantes faced off in the Elias Cup in what was to go down as an Anglesey League classic. Arriva Bangor and Bodorgan had made history by reaching the final of the competition but it was the former who eventually came out on top. Bodorgan had been 2-0 up early on thanks to goals from Luke Gardner and Gerwyn Williams, however an Andy Clarke penalty and a late strike from Gavin Pritchard took the tie to Extra Time and eventually penalties, where Arriva won 3-2.

May 28 brought about the Benllech Car Boot Trophy final and Arriva Bangor added their second piece of silverware of the season by beating Caergybi 6-4 in a thriller. A hat-trick from leading goalscorer Gary Jo Owen and a goal from his brother Liam Williams were not enough for Cybi as goals from Danial Ogwen Jones (2), Kieron Davies, Liam Roberts, Sammy Williams and Scott Hughes secured a double for Kevin Jones’ side.

The last Cup final of the season took place at Llanfairpwll FC’s ground on June 1 as Caergybi and Bryngwran Bulls battled it out to win the Megan Cup. It was Cybi who came from 1-0 and 2-1 down to clinch the trophy in the end. Goals from James Ryan and Nathan Lewis were not enough for The Bulls as Glenn North, Luke McKittrick and Gary Jo Owen fired Dale Moffat’s side to victory.

As always, Kon-X Anglesey League clubs also took part in the North Wales Coast Football Association Junior Cup, playing against teams in higher divisions. It was Valley who made it the furthest (semi-final’s) where they were booted out after being accused of fielding a suspended player in their quarter final win over Bontnewydd. Here’s how each team from the division got on in that Cup …

Caergybi hitman Gary Jo Owen (pictured above) led the way in terms of goals (in all competitions) this season, hitting an incredible tally of 58.

The prolific striker beat his previous record of 57 goals he achieved whilst playing for now defunct Anglesey League side Morawelon in 2013/14 and finished as top scorer, despite missing a couple of weeks of action.

His form after returning in 2018 was sensational and his link-up play with his brother, attacking midfielder Liam Williams, gave Cybi that cutting edge at times, helping them onto a fourth place finish in the division.

Finishing behind him in the goal scoring charts was Bryngwran Bulls’ James Ryan who also had a fantastic season, netting 54 goals. Meanwhile in third and fourth place were Arriva Bangor’s Scott Hughes (46 goals) and Valley’s Justin Williams (36 goals), who have both been pivotal to their clubs this season.

SURPRISE STAR OF THE SEASON

I’ll have to go with Arriva Bangor’s Scott Hughes (pictured above) on this one.

Having played for Kevin Jones’ side in the Sunday League for the past three seasons, few would have expected Hughes to come firing all guns blazing on a higher league this year, but that’s exactly what he did.

The lively forward hit 46 goals in an incredible campaign for both himself and his club as they claimed a fifth place finish and a cup double.

Fellow Arriva Bangor man Mutsu Oyama was another player who surprised us all with his performances. The Japanese full-back worked tirelessly for his side and was ever-present in their starting eleven.

Meanwhile, Kurt Harris was a surprise star in Caergybi’s squad, notching up 13 goals whilst Bodorgan’s Danny Connolly also stood out with 18 goals.

YOUNG PLAYER OF THE SEASON

I’ll have to go with Herbie Hofsteede (above on the right) on this one without a doubt.

The Mynydd Tigers attacking midfielder/forward had an incredible year and was one of the main stars in the side that went on to win the division.

After signing for the club from the Caernarfon Town youth system just last summer, it wasn’t long before the 18-year-old started to show what he could do in the Anglesey League and teams struggled to contain him time and time again.

His vision and passing was second to none, but he also managed to bag himself a highly respectable tally of 32 goals along the way to his side’s title win.

PLAYER OF THE SEASON

Besides the obvious candidates of Gary Jo Owen and James Ryan, there’s probably a few other players who could be in a position to land this prize and I think it would be hard and almost unfair to pick just one out of the lot.

Hari Jones and Henry Caldecott have both been stalwarts in Bryngwran Bulls’ defence this year and captain Andrew Bailey has been solid throughout in the midfield too, notching up 20 goals along the way. Winger Matty Roberts has also impressed with his performances and 15 goal contribution whilst Iolo Jones‘ work rate and vision hasn’t gone unnoticed.

Other than Hofsteede, Mynydd Tigers’ Ciaran O’Brady was a standout star throughout their season too. The Irish winger was a player who many enjoyed watching as he had a great work rate and brilliant skills on the ball. He also netted 17 goals for his side. Captain Mike Williams also received high praise for his spectacular efforts in defence whilst versatile 17-year-old Kieron Bullock impressed with his 18 goal tally.

At Caergybi, the likes of Liam Williams, Glenn North, Luke McKittrick and Dewi Thomas were highly valued for their great performances, as were goalkeeper Kieran Weeks and defender Colm Foley.

Valley had their fair share of star players too with their attack of Justin Williams (36 goals), Mike Williams (30 goals) and Konner Druce (23 goals) placing them as the highest scoring team in the division. Midfield hero Marc Wilson is held in high regard at the club and the likes of Jordie Lees and Nik Kontodios also impressed.

MANAGER OF THE SEASON

It has to be Richard Owen (pictured above) for me.

The Bryngwran Bulls gaffer may have narrowly missed out on the Anglesey League title on the final day but you have to say that the way he has set his team up to play has been admirable.

He has led his side to Lucas Oil and Dargie Cup success this season and has also taken them to finishing as runners-up in the league and in the Megan Cup too.

Mentions must also go out to Mark Hughes (Mynydd Tigers) for taking them to the title and to Dale Moffat (Caergybi) and Kevin Jones (Arriva Bangor) for leading their clubs to cup glory in their debut seasons in the Anglesey League.

I also have to applaud the trio of Dave Webster, John Webster and Robin Griffiths for the improvements they have made to that Bodorgan side this season. Long may it continue!

WHAT NEXT FOR THE ANGLESEY LEAGUE?

It looks (for the time being at least) as though neither Mynydd Tigers nor Bryngwran Bulls will be accepting promotion to the Gwynedd League next season.

There are however a number of clubs being linked with playing in the division. The likes of Cefni FC (Llangefni), Bethesda Reserves and Holyhead Hotspur Reserves have all been mentioned in recent weeks, although none of those have been confirmed yet.

One thing that has been confirmed though is that Pentraeth Reserves will be merging with Sunday League side Pentraeth Dragons (who were formerly Tynygongl-based side Treetops FC). With manager Justin Gallagher departing the reserves after their final game, Dragons coaches Danny Jones and Paul Matier will be taking over as manager/assistant manager at the new-look club next season.

Elsewhere, Scott Pettersen looks set to join the coaching team at Valley Athletic as they look to bounce back from a fairly disappointing season this time around. It looks as though he will be teaming up with Barry Rowlands to help them challenge for the title next season.

Personally, I hope to see a few new faces and teams involved in the competition during 2018/19 as it will strengthen the league as a whole and give it more recognition in the process.

That’s all on the rumour front as it stands, but be sure to keep reading AFEFootballNews for all the latest on the Kon-X Anglesey League and beyond!