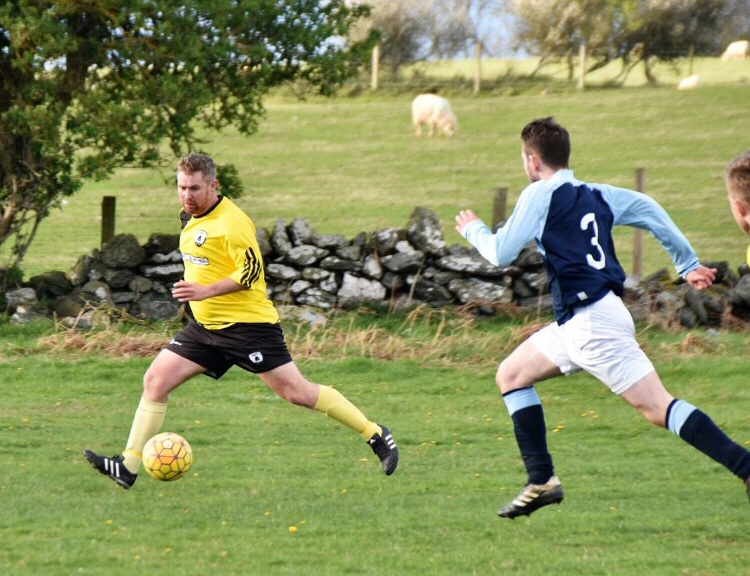 BRYNGWRAN Bulls ended Llandegfan’s first season back in the Kon-X Anglesey League in ruthless fashion with a crushing 17-1 win on Wednesday night.

Once again, it was James Ryan who was the star of the show for Richard Owen’s – this time hitting a hatrick of hatrick’s (nine goals) against a crumbling Llandeg defence.

The second half proved to be just as tough for the home side as The Bulls continued to take their chances well.

Llandegfan had pulled it back to 2-1 at one point after a mix up in The Bulls defence allowed them to score. Dale Rowlands also had two goals ruled out for offside.

However, it was never really a close contest at all and Bryngwran take another fine three points on their march to the possibility of winning the Anglesey League title.

On Tuesday night, Caergybi went top of the league following a 2-0 win over Pentraeth Reserves.

Goals from Jack Roberts and Gary Jo Owen (his 41st of the campaign), kept Dale Moffat’s side well and truly in the title race with a vital win.

Can they go on to spring a surprise and beat Valley, Bryngwran and Mynydd to the title? They’re still top as it stands …

Elsewhere on Tuesday, the ever-improving Llangoed Reserves squad narrowly lost 2-1 at home to Mynydd Tigers, who finally put an end to their tough run of results of late.

The Tigers had seemed to be struggling ever since their Lucas Oil Cup final loss to Bryngwran Bulls last month and had endured a miserable run since then.

However, Mark Hughes’ side came back strong in this one. Goals from Kieran Bullock and Mike Holroyd earned his side the three points after Arwyn Roberts had netted for The Reserves.

The title looks beyond The Tigers now, but this youthful side have been great to watch at times this season and they’re still in with a shout in the Dargie Cup too.