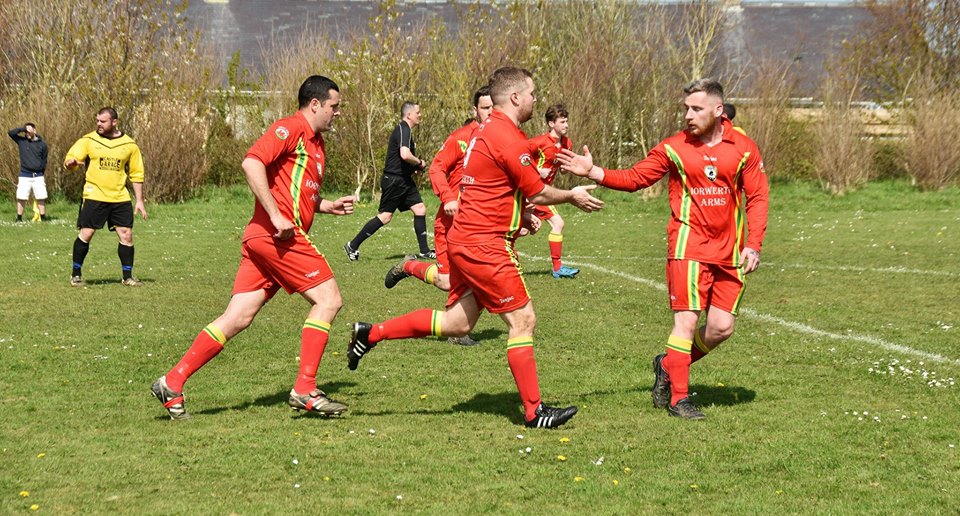 In the Bwlch Car Boot Cup quarter final we were given a taste of what the Elias Cup final may look like, although I think Bod will be a little more up for that one than they were in this encounter.

Hughes’ double, along with another brace from Matty Jones and a Kieron Davies strike gave Kevin Jones’ side a convincing win to see them progress to the semi final stages of the tournament.

Joining them in that round will be Bryngwran Bulls, who beat Llangoed Reserves 3-0 courtesy of a James Ryan hat-trick.

The talented forward’s three goal haul (which included two well-taken penalties) took his tally for the season up to 40 as The Bulls bounced back from their disappointing Elias Cup loss to Bodorgan in midweek.

Llangoed keeper Lee Heywood was once again praised for his performance between the sticks, something that has been a regular occurrance for the club this season.

Richard Owen’s side are into yet another semi final this season – having already reached the finals of the Megan and Dargie Cups and won the Lucas Oil Cup too.

With so many matches still left to play for The Bulls, will Ryan go on to reach 50 goals this season?

The third and final team joining The Bulls, Caergybi and Arriva Bangor in the semi-finals of the tournament are Valley, who overcame a tough challenge against Mynydd Tigers on Saturday afternoon.

The league-leaders beat the visitors on penalties after 90 mins had ended 1-1 and extra time had ended 2-2.

Top scorer Justin Williams notched his 32nd goal of the season and Mark Hamblin added the other. Two goals from player-manager Mark Hughes ensured that The Tigers made it to penalties but they eventually crashed out of the cup.

Barry Rowlands’ Valley side have had a tough time in the Cup competitions (except the Junior Cup) so far this season so they’ll be glad to get into the last four of this one. The Tigers’ youthful side have hit a slump recently and will be looking to bounce back to form sooner rather than later.

Wednesday night will see Llandegfan welcome Bryngwran Bulls to Lon Ty Newydd in what will be their final Kon-X Anglesey League game of their tough first season back.