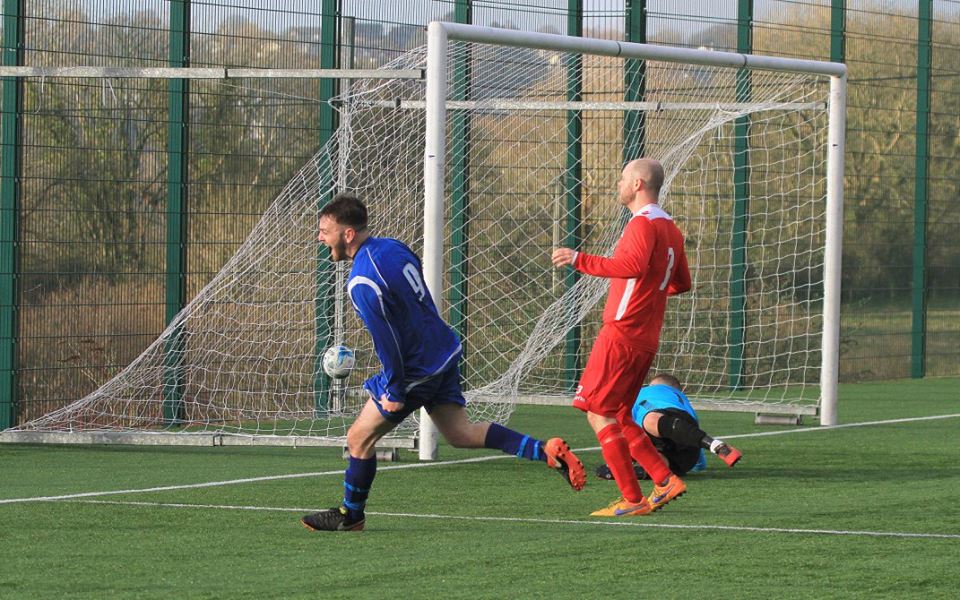 Caergybi reached the final of the Megan Cup after a thrilling 5-3 win over Arriva Bangor. Dale Moffat’s side, playing their first ever season in the Kon-X Anglesey League, put in a terrific performance to overcome a determined Arriva eleven.

Cybi went in front when Kurt Harris found the back of the net on 20 minutes. Just ten minutes later, winger Liam Williams doubled their advantage. However, Arriva made things difficult and on 38 minutes, pulled one back through top scorer Scott Hughes, who notched his 35th goal of the season. On the hour mark, Kevin Jones’ side equalised through Chris Dawson to set up an eventful last half an hour.

The scoreline didn’t remain tied for long however. Just two minutes after Dawson scored, soon-to-be Man of the Match Gary Jo Owen netted to put Caergybi in front once again. The striker, who had only played around 20 minutes of game time in recent weeks prior to this match, returned to first team action in style, notching another goal on 77mins to give his side a 4-2 lead.

The drama continued though as Kieran Davies pulled yet another goal back for the visitors on 86mins to set up a nervy finale. The game was only well and truly done and dusted on 89mins when Owen grabbed his hat-trick and reached the 30 goal mark for the season. His celebration was a little unique to say the least (see below) …

A cracking game for the neutral and a fantastic victory for Caergybi, who will now face Bryngwran Bulls in the Final this coming Friday (April 13, 7pm ko).

Elsewhere on Saturday, Llangoed Reserves came from two goals down to claim an impressive 2-2 draw with league leaders Valley Athletic in the Kon-X Anglesey League.

The break through for the visitors came when a free kick was floated in and the tall figure of Mike Williams bravely challenged a defender and goalkeeper to head in from close range on 14mins. Valley’s lead was almost doubled when Marc Wilson beat the keeper and, crossed the ball to Mark Hamblin, who’s volley was put across the face of goal but didn’t go in.

The lead was eventually doubled when Barry Haigh released Mike Williams once again and he made no mistake in getting his second of the game on 36 mins.

Llangoed pulled a goal back before half time though when a throw in was put in the box, and Tom Verburg shrugged a defender off before scoring with a well timed volley.

The second half was very closely fought with both sets of players battling well, and both defences being in good form. It wasn’t until the final 10 minutes that the game changing moment came for Llangoed.

Shaun Morris had raced through on goal and scored and despite protests of a high boot on Marc Wilson by Valley, the referee allowed the goal to stand and as a result, Llangoed had completed a fine comeback.

Martin Byast was denied a late winner by a great save from Jamie Owen. PICTURE: Dewi Williams.

Both sides could have won it in the dying moments of the match too. Valley pressed and tried to get that winning goal and the closest they came was through Hamblin, who headed just over from close range. Llangoed then had a chance to win the game themselves in the last minute of the game when Martin Byast went one on one with goalkeeper Jamie Owen, but the latter came out on top and made a great save.

Valley will no doubt be disappointed by this result, but the truth is that Llangoed Reserves battled hard to earn themselves a point. The result was even more incredible due to the fact that defender Warren Fletcher had to deputise in goal for Llangoed on the day and thier coaching team of Dewi Williams and Vinny Walker both had to play from the start as well.