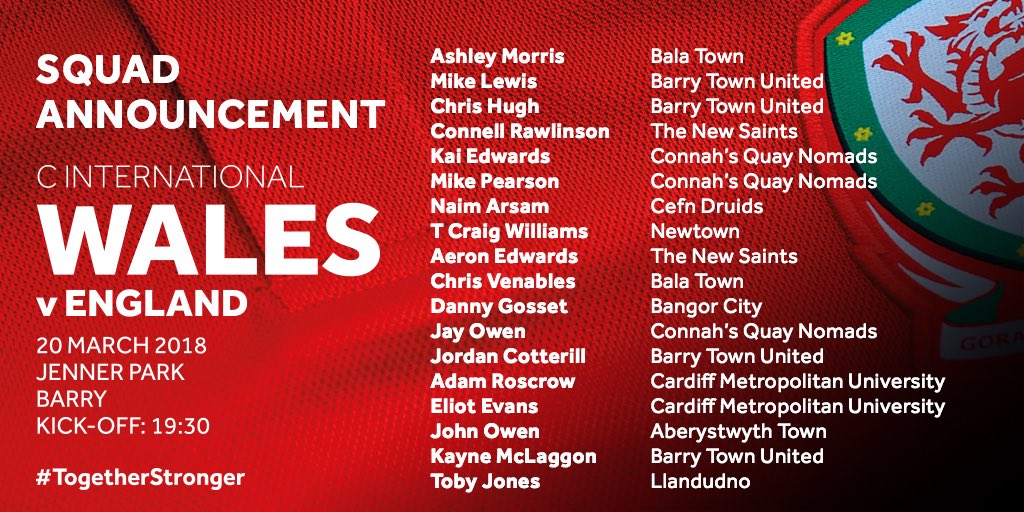 THE ANNOUNCEMENT of the Cymru C squad on Twitter yesterday caused quite a storm amongst Welsh football fans.

Former Swansea City star Owain Tudur-Jones and squad manager Mark ‘Jonah’ Jones’ (pictured below) have made their selections for the side that will face an England C side in a friendly match at Barry Town’s Jenner Park on Tuesday, March 20.

Whilst many agreed with the overall selection, others believed that there were some big names missing from the final 18 man squad. Here, I examine who’s in and give my take on who should have been included in my opinion …

So, to begin with, here’s the announced squad in full:

** = Invited to train with the squad.

Overall, I don’t think you can complain about any of the players selected in the squad as they’re all very good players playing at the highest level of football in Wales. There is some decent squad depth in there as well as any of those 18 players selected are good enough for a place in the starting eleven.

The JD Welsh Premier League’s three leading Welsh-nationality scorers, Kayne McLaggon, winger Eliot Evans (who both have 12 goals each) and Adam Roscrow (8 goals) are all in the squad. They’ll be the ones most likely to cause a threat to the England side.

Tudur-Jones and Jonah have also selected a very strong midfield for the friendly in Barry. Welsh-speaking midfielder Aeron Edwards is a great player technically as is Bangor City’s Danny Gosset. Then you have the exciting Jordan Cotterill, Jay Owen who will do the dirty work when needed and Chris Venables who is one of the best in the WPL to complete the set.

In defence, they’ll most likely have attacking wing back Arsam driving them forward down the wing whilst Rawlinson and Kai Edwards stand firm in the heart of the back four. In goal, I would have Ashley Morris starting ahead of Mike Lewis personally.

Like I say, overall a VERY strong side and some very good selections made. HOWEVER, there are a few notable absentees.

For me, if Emlyn Lewis (Cardiff Met) hadn’t struggled with injury as much as he has this season, he would certainly be in this Cymru C squad. He’s a tough-tackling defender and is definitely one of the best that the WPL has to offer on his day.

Lee Surman of Carmarthen Town is another player who should have been given some serious consideration as he’s a real leader with experience. Other than that, you have Danny Hughes of Llandudno and his team-mates Marc and Mike Williams, who have both represented Wales at Under 21 level in the past.

Bangor City goalkeeper Connor Roberts would have also been very close to a call-up too I would imagine.

The biggest criticism that I and so many others would have with the C squad selection is that there could have been a little more experience and possibly players from the lower leagues added to it as well.

Players like Lee Idzi (Goalkeeper for Carmarthen), Chris Marriott (Defender at TNS) and Les Davies (striker at Bala), who have just under 1000 Welsh Premier League appearances between them, would have added something different to this side. They would have at least provided great cover if nothing else.

The likes of Nathan Craig and Darren Thomas (Both of Huws Gray Alliance side Caernarfon) would have no doubt thrived if they had been given the chance to play too as they are both superb players who should go on to play in the Welsh Premier League soon.

I could probably go on all day about the pro’s and cons of the selection, but the truth is this; having this Cymru C squad is a highly interesting concept and gives our top Welsh Premier League players a chance to get a feeling of what it’s like to represent their country.

Those who missed out this time around will at least have the prospect of there being another friendly at some point in the back of their minds and can push on to be included for the next one.

I for one will be keeping an eye on how the match against England unfolds.

The England C squad (made up of semi-pro footballers from the National League) has been announced and is as follows: