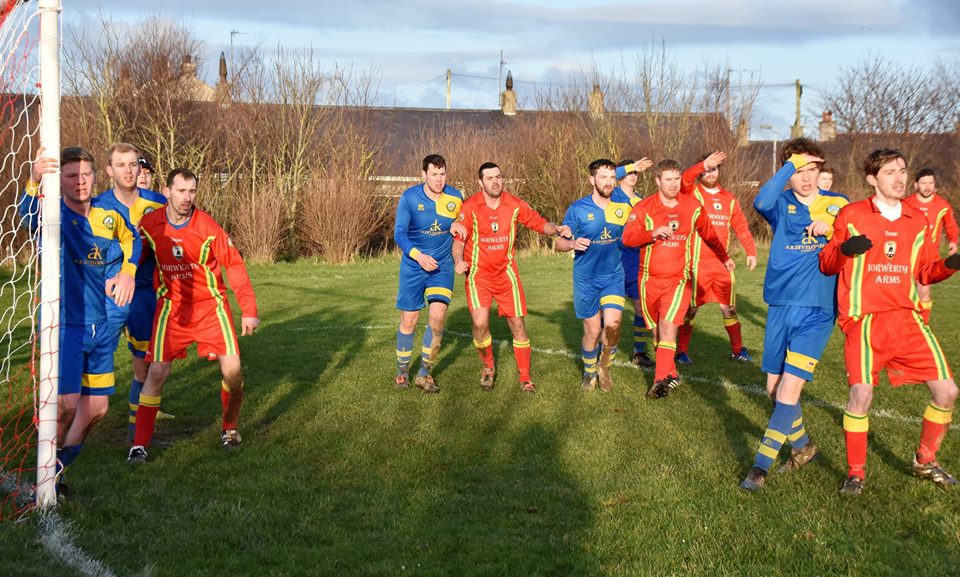 SATURDAY afternoon once again brought about plenty of footballing action on Anglesey and Gwynedd as the Kon-X Anglesey League sides took part in various domestic competitions.

The fixture between Llandegfan and Mynydd Tigers was postponed for another date, but

Barry Rowlands’ Valley squad started 2018 just as they had finished off 2017 with another high scoring win and qualified for yet another cup semi-final in the process.

Dale Moffat’s Caergybi side had won the two previous clashes 4-1 in the league and 5-1 in the Car Boot Cup and were hoping to make it a hat-trick of victories, however it wasn’t to be.

A wet and slippery surface provided a problem right from the off as both sets of players struggled to find there footing. Caergybi had numerous chances early on in the match, with former Valley play maker Liam Williams hitting numerous long range efforts and testing Valley goalkeeper Jamie Owen.

As often has been the case this season though, the back four of Jack Peters, Ashley Hughes Ryan Heywood and the veteran Barry Roberts held here own and dealt with every chance they faced.

On 35 mins, Caergybi had their closest chance of the half when a goal mouth scramble saw the ball fall to Ashley Beck who had his effort cleared off the line.

Moments later, the tie turned on its head and Valley took the lead. Konner Druce went through down the left side and his low cross fell to midfielder Marc Wilson who’s shot struck Justin Williams (right) and bounced kindly to allow him to grab his 20th goal of the season.

In the second half, Caergybi were forced in to making two changes, but continued to press for an equaliser.

However, the hour mark brought about the substitution that turned out to be the deciding point in the game. Wilson gave way to the energetic Ryan Hall and it wasn’t long before he made an impact.

Five minutes later, Justin Williams beat the off side trap before running through and squaring for Hall to fire home and make it 2-0. Three minutes later he was at it again as Ashley Hughes free kick was saved by Caergybi keeper Jamie Kiely, only for the ball to drop at Hall’s feet and hand him his second of the day.

On 75 minutes, the game was well and truly put to rest as Williams repeated the move from the second goal, squaring to Hall, who bagged his hat-trick. Bizarrely, another Hughes free-kick was also rebounded out to Hall who then grabbed his fourth with less than ten mins on the clock to complete the 5-0 scoreline.

It was an unforgettable day for Hall as he made a fantastic impact on the match and helped his side progress to the semi-finals of the Lucas Oil Cup.

The other match in the Lucas Oil Cup provided a nine-goal thriller between two very similarly matched sides that both seem to have seen some improvements in recent weeks.

Dewi Williams’ Reserves side battled hard throughout in this one and had managed to pull a respectable scoreline out of the bag after being 5-2 down at Cae Cob.

The match provided a real spectacle, with end-to-end football being provided by both sides, hence the high number of goals scored.

Bodorgan were looking good in front of goal and Luke Allaway hit his 15th of the season from the spot. A brace from Darragh Byrne, alongside a goal from Danny Connelly and an own goal completed their scoring.

Phil Owen had a day to remember for Llangoed Reserves as he grabbed two assists and a goal. Star Striker Arwyn Morris hit a brace and Robin Morris came from right back to volley home a free-kick which was floated in by Kane Briggs.

They will feel hard done by in the end, but can walk away with their heads held high regardless. Bodorgan on the other hand are looking sharp and head into their fixture v Llandegfan next weekend in fine form.

The only game in the division this weekend saw the Bulls move to the top of the Anglesey League with a hard-fought 2-1 win over Pentraeth Reserves.

In an unusual incident, Justin Gallagher’s Reserves side volunteered to play their home game at the Bulls’ pitch as their own field seemed to be too boggy to play on, despite being deemed playable by the referee.

With Pentraeth’s first team not playing, some of their players were in the Reserves squad on Saturday afternoon and their impact certainly told.

However, after around 15 minutes or so, the Bulls started finding their feet, mainly down the right with Tony Meyer becoming more and more lively as the match went on. On 20 minutes he handed them the lead when he chased down a short goal kick, tackled the defender and slotted home.

A half time score of 1-0 meant that the game was far from over and was still very much in the balance.

However, early on in the second 45 mins, substitute Dylan Jones swung in a ball that a Pentraeth defender handled, resulting in a penalty. With captain Andrew Bailey missing a penalty against Arriva last week, top scorer James Ryan stepped up this time to score his 23rd of the season, placing it confidently down the middle.

A crazy last five minutes saw Pentraeth get back in to it from the spot, with Lewis Owen converting to set up a tense finale.

In the dying moments, the Reserves were awarded a controversial penalty. Bulls defender Hari Jones had seemingly won the ball in the tackle but the referee had pointed to the spot much to the amazement of both management teams.

With a real chance to take home a point, a Pentraeth sub stepped up to take the penalty.  Bulls keeper Gwynfor Williams dived to his right and produced a magical save and saved 3 points for his side as the whistle blew immediately following the incident.

After such an incredible ending to the game and one of the moments of the season so far, Bulls manager Richard Owen said: ” The way this season is going I’ll be needing a pace maker soon.

“I would tell anyone that’s bored on a Saturday afternoon to come down and watch what will definitely will be a roller-coaster-ride end to our season. Next week we face another Reserve side in Llangoed and we are now currently top of the Anglesey League with six tough games left to play.”

Arriva Bangor came crashing out of the NWCFA Junior Cup this weekend as they were beaten by a strong Rhuddlan Town side at Beach Road.

A disastrous start to the fixture saw Kevin Jones’ side go down to nine men in the first half and were trailing 3-0 at half time as a Corey Taylor goal and an Andy Booker brace gave Rhuddlan a comfortable lead.

In the second half, the home side pulled two back courtesy of Liam Roberts and the prolific Scott Hughes. However, two more goals from Booker handed Rhuddlan the win in the end and progression to the next round.

Rhuddlan, who are currently third in Division 1 of the Vale of Clwyd and Conwy Football League, proved to be too strong in the end as their talented group of players, many of whom have played at higher levels such as the Cymru Alliance in the past, dominated the match.

Credit to Arriva though, they really dug deep in the second half, particularly as they only had nine men on the pitch. Their focus will now turn to the Kon-X Anglesey League, where they could prove to be the dark horses this season.

Next weekend, the following fixtures will take place:

Keep reading AFEFootballNews for all the latest from divisions in Anglesey, Gwynedd and beyond.