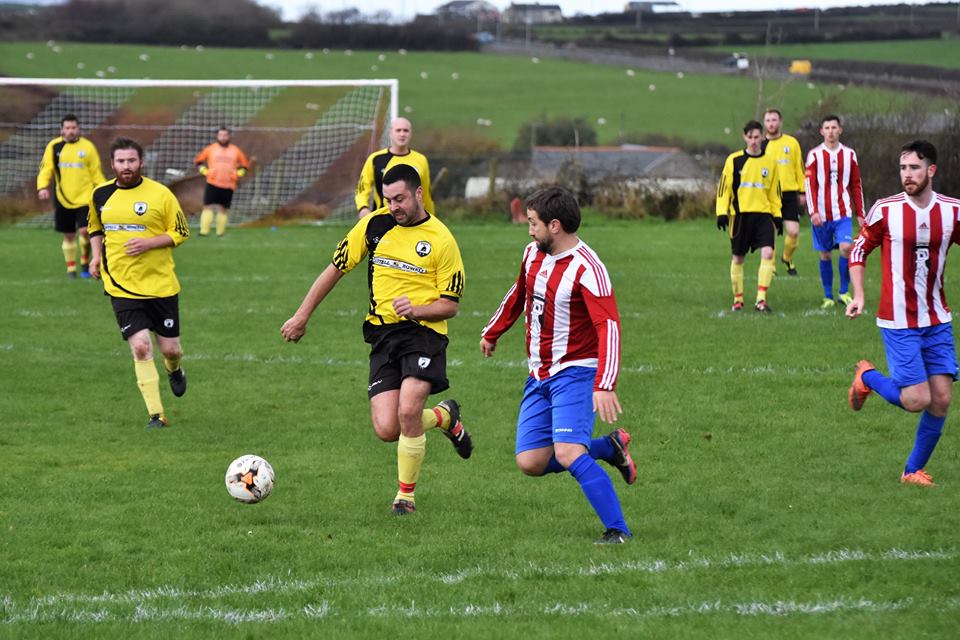 THIS weekend saw the Kon-X Anglesey League clubs in action in both the league and in the Lucas Oil Dargie Cup competitions.

Bryngwran Bulls took on Bodorgan and Llandegfan faced Pentraeth Reserves in the league whilst Valley Athletic took on Llangoed & Dist. Reserves and Arriva Bangor took on Caergybi in the Cup.

Bryngwran Bulls came away victorious against a Bodorgan side who seem to be getting stronger as a team.

Despite the scoreline, the visitors gave the Bulls a tough test on Saturday afternoon. The home side did have key player Hari Jones and top scorer James Ryan both absent from their squad however.

Club captain Andrew Bailey was played up top in this one and didn’t disappoint as he grabbed himself a hat-trick.

Dylan Jones got the Bulls off the mark early on six minutes with a fine half volley which flew in off the post.

Baileys then made it two-nil from the penalty spot not long after, following a blatant push in the back from the Bodorgan defender.

On 22 mins, Bodorgan were back in the game through the ever dangerous Luke Allaway who finished in fine style from 18 yards, giving Bulls keeper Roy Sayle no chance.

Breathing space was given to the Bulls just before half time when Andrew Bailey struck again to bag their third of the afternoon with a fantastic looping header.

A much quieter and flatter second half saw both teams slogging it out until the 79th minute, when Bailey completed his hat-trick, finishing with his left foot.

The game ended in controversy as a Bodorgan player was sent off in what was a reportedly strange incident before the final whistle blew at Cae Cob.

Bryngwran continue their fine form then, but it’s worth keeping an eye on Bodorgan over the next few weeks I would say as they are standing to find their feet with the new players they have in their squad.

The last time these two sides met, Llandegfan came away with what is their only win of the season so far. This time around however, it wasn’t to be.

A ruthless first half performance from the visitors was too much for Llandeg to handle and although they improved greatly in the second half, they had left it all a little too late by then.

Pentraeth Manager Justin Gallagher was pleased with his side’s performance on the afternoon, as they picked up their first points for a couple of weeks and his biggest win as Pentraeth Reserves manager.

“We had a new system and new set up going in to the game, and fair play the lads adapted well to it.” he said.

I’m a bit disappointed with the two goals we conceded, but other than that, it was a very solid performance.”

Despite the loss, Llandegfan can take pride in the fact that they are sticking together as a team and are beginning to score more goals now too. If they can curb some of the defensive mistakes being made in their games, then they can certainly improve quite quickly.

The two sides now face tough challenges in the Bwlch Car Boot trophy next weekend as Llandegfan travel to Bangor to face Arriva and Pentraeth face fellow Reserves side Llangoed and District at home.

Arriva lost 4-0 to Caergybi for the second time in a week as the away side progressed into the next round of the Dargie Cup.

Conditions were damp following heavy rainfall but Arriva officials had worked hard to get the pitch playable at Beach Road and all good to go.

Caergybi were ahead early on in this one as captain Dewi Thomas, just back from injury, laid a long ball through to Gary Jo Owen who scored on five minutes.

Ten minutes later, Arriva’s Scott Hughes was through one on one against Caergybi Keeper Kieran Weeks who denied him with a great save.

Not long after, Arriva goalie Dion Williams matched Week’s feat when he made an excellent save to deny a good attempt from Konner Druce.

Gary Jo Owen was at it again on the half hour mark as he struck to make it 2-0 to the visitors.

Early in the second half, Arriva managed to push forward more but the Caergybi defence managed to keep any threats out and stood strong.

It took 77 minutes for Caergybi to well and truly kill the game off. Luke McKittrick scored to give the visitors a 3-goal cushion, before Kurt Harris completed the scoreline, adding a fourth on 87 minutes.

Another clean sheet and another fine display from Caergybi sees them through to the semi-finals of the Dargie Cup.

Valley Athletic returned to winning ways as they beat Llangoed & Dist. Reserves in the Dargie Cup.

Both teams took a minute prior to kick off to pay their respects for those who have lost there lives for their county.

The fixture provided a good performance from both sides, despite what the score line might suggest at first glance.

The first chance of the game fell to Justin Williams, who saw his shot go wide from 6 yards out.

After many questionable off side calls, Valley believed they’d finally broken the deadlock on 20 minutes when Marc Wilson played a long searching ball to Barry Haigh who , as he did the previous week applied his “trademark” acrobatic volley right into the far corner, only to have his celebration cut short due to the offside flag being raised.

Eventually, it was Llangoed who took the lead despite Valley’s persistence. On 30 minutes, Robin Morris bent a free kick right into the top corner to put the visitors 1-0 up.

However, the lead didn’t last long. Five minutes later, Mike Williams squared the ball to Justin Williams who made no mistake and slotted home his fifth goal in three matches.

In the second half, the outstanding battling of central midfielder Nik Kontodious meant that Llangoed’s play became very limited in the middle of the park. Jack Peters, Ash Hughes and Barry Roberts were solid at the back too.

Several more chances went begging for Valley before they eventually went 2-1 up on 75 minutes thanks to a Barry Haigh goal after Kontodious had played him in.

The goals began to flood after the second one went in. Valley captain Barry Roberts converted Danny Roberts cross for 3-1 then straight after Mark Hamblin added a fourth after beating his defender from a corner to head home.

Barry Roberts found the net again to secure a 5-1 victory for Valley and booked them a place in the semi final against local rivals Bryngwran.

Next week, the Kon-X Anglesey League sides will be involved in Bwlch Car Boot Trophy fixtures.

In Group A, Bryngwran Bulls take on Mynydd Tigers at home whilst Llandegfan make the short trip to Bangor to face Arriva.

In Group B, Caergybi face Valley Athletic and the league’s two Reserves sides Pentraeth and Llangoed and District, will also face-off.