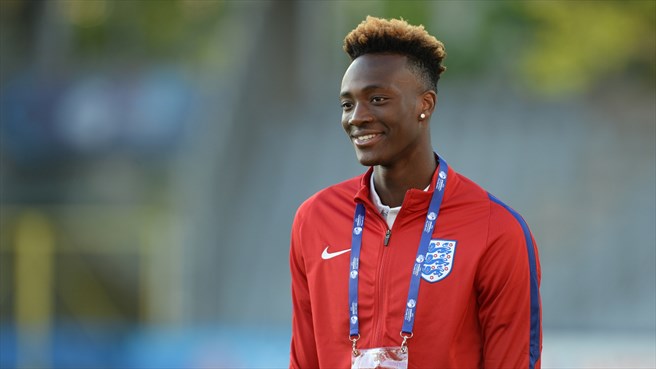 AFTER Dele Alli’s masterclass against Real Madrid in the Champions League in Spurs’ 3-1 win over Real Madrid on Wednesday night, much has been said about the future of the England set-up.

With the England under 17’s winning the World Cup last week and the Under 21’s doing the same over the summer, it looks as though they have a crop of bright, young talent on their hands.

In midweek, it was announced that England manager Gareth Southgate was set to give first senior call-up’s to Premier League trio Ruben Loftus Cheek (Crystal Palace, on loan from Chelsea), Tammy Abraham (Swansea on loan from Chelsea) and Joe Gomez (Liverpool) in the Three Lions’ next international friendly.

It’s always good to see those youngsters get a chance, as it gives us some idea of who will be the next generation of stars for our countries.

In this article, I bring you ten of the best talents from Britain in the footballing world right now, some you will have heard of before and others you won’t have, but I’m sure you will soon know exactly who they are!

Let’s start with one you will most probably have heard of, particularly if you’re a regular Premier League watcher.

Abraham came into the media’s attention last season when he enjoyed a phenomenal campaign with Bristol City in the Championship. The 6ft 3′ striker was loaned out by Chelsea (as he has this season too with Swansea) and managed to steer City away from relegation by scoring 23 goals in 41 appearances and scooping the Championship Top Scorer award in the process.

Since making his Premier League debut with Swansea in August, he’s hit four goals in ten matches and has looked deadly yet again. His finishing skills with both his head and his feet are superb.

The 20-year-old signed a new deal with Chelsea before signing on at the Liberty so it looks as though he’s certainly in the Blues’ future plans. An England call-up is on the horizon too, so things are looking very good for Abraham at the moment!

Tierney is a Scottish left-back who is currently living out the dream of playing for his boyhood club, all the while attracting praise from several members of the media and plenty of fans too.

The 20-year-old made his debut back in 2014 and has since gone on to play 59 matches in the Scottish Premier League, as well as playing regularly in the Champions League this season, which will boost his confidence to no end. He has also earned eight caps for Scotland to date.

Many clubs are said, such as Manchester United and Liverpool, are said to be keeping an eye on the promising youngster right now and with Celtic becoming nearly untouchable in the SPL, is it fair to say that he could be persuaded to take on the new challenge of playing in England very soon?

Hated by the English already for snubbing them for Wales, Brooks looks like he could be a real talent as he’s given more game time.

The central midfielder has played a big role in Sheffield United’s incredible campaign to date, which has seen them go from being promoted from League One to sitting at the top of the Championship in the space of just a couple of months.

The 20-year-old is a former Manchester City academy player and is very technically sound on the ball. His winner against Leeds United in the Steel City derby on September 24, showed how cool he was in front of goal too.

He ended up earning the Man of the Match award for his fantastic performance in that game and was called up to the senior Wales side just four days later by Chris Coleman. Watch this space with this guy.

Quite how Gomez and Loftus-Cheek have been selected for England duty and Davies hasn’t is beyond me, as he is a class above them and quite a few others too.

The 19-year-old central midfielder’s style of play is very ‘retro’ in comparison to many of the younger players of today. He’ll often be seen running around the pitch and grafting hard to win the ball back or set his team-mates on the counter-attack.

Davies;’ finest hour and performance came on January 6 of this year, when he bagged a great solo goal and the Man of the Match award as Everton tore Manchester City to shreds in a 4-0 win.

The youngster has made 36 Premier League appearances for the Toffee’s since 2015 and has become a fans favourite and a mainstay within the team too. Surely it can’t be too long before we see him playing for England?

The hero of the hour for England’s under 17’s last week, Brewster became a national sensation when he hit a hat-trick against Brazil to send the young Lions into the final, where they eventually went onto lift the trophy.

In fact when you look deeper into the stats, the 17-year-old, has hit an incredible 20 goals in 22 appearances for the Under 17’s during 2016-17 and has well and truly stood out amongst the crowd.

At the age of seven, he was spotted by scouts from Chelsea, Arsenal, West Ham and Charlton. He joined Chelsea and developed his game under coach Michael Beale in the club’s academy until the age of 14 when he left to join Premier League rivals Liverpool, where he has remained since.

His record of scoring goals speaks for itself and it looks as though Liverpool could have a “next big thing” on their hands here.

This young man needs no introduction, particularly if you’re a Welshman like me.

The 18-year-old wide man first burst on to the scene with Liverpool in November 2016. He became the club’s youngest goal scorer (17years 45days) when he netted the winner against Leeds United in the EFL Cup and showed what he was capable of.

Fast forward nearly a year and Woodburn would shine once more, only this time on the international scene. On September 2, he made his senior debut, coming on as a second-half substitute and scored a wonderful 25-yard strike in a 1–0 win against Austria.

From Ryan Giggs to Gareth Bale and now Ben Woodburn – Wales have a talent for producing great wingers and he is without a doubt our next big thing.

Sancho made the brave decision to make a move overseas during the summer in order to try and earn some first team minutes.

He made the switch from Manchester City to German side Borussia Dortmund, who have grown something of a reputation for developing and nurturing great young players over the years and have some of the best talent in Europe in their ranks right now, Sancho included.

Much like Brewster, he played a vital role in the England Under 17’s road to World Cup success last week and his record of scoring for them, despite being a winger, is sensational (16 goals in 19 appearances).

He was held in high regard at Man. City but wanted to move away after they broke their promise of giving him first team minutes. I believe that showing such maturity to move abroad in order to find success, baring in mind he is only 17, could turn out to be a great decision from him.

I’ll be keeping an eye on his progress that’s for sure.

I was a little sceptical when Ampadu was brought to Chelsea from Exter City this summer as I though he would be another player in the long list of those who end up being loaned out from Stamford Bridge.

However, it turns out I was wrong in this case as the 17-year-old centre back has actually played in both of Chelsea’s matches in their Carabao Cup run so far and has been given the opportunity to show what he can do.

One thing I have noticed about Ampadu is that he is very composed on the ball, especially when you take into consideration just how young he is, it’s frightening.

The youngster has been called up to the Wales squad, for their friendly match against Panama, but in my opinion Coleman and his boys need to hurry up and get him played in a proper qualifier soon as he is eligible to play for Ghana and England too.

We have lacked a truly brilliant centre back (minus Ashley Williams perhaps) for a long, long time, so here is our chance to snap one up.

Pep Guardiola is said to be a huge fan of Foden after watching him impress in pre-season, believing that he fits in well with his tiki-taka tactics that he likes to use.

The 17-year-old is an attacking midfielder who possesses some seriously quick feet that he uses to his advantage to get way from defenders.

He is another youngster who impressed during England Under 17’s World Cup win and even received the Golden Ball award, which is given to the most valuable player at the tournament.

He stood out as the best player at that FIFA World Cup tournament, alongside Brewster, and looks as though he has the potential to go really far in the future. Could Manchester City have found themselves David Silva’s replacement already? Time will tell.

Last but not least, a list of top talented youngsters wouldn’t ever be complete without one of Arsenal’s rising stars being included.

Striker Nketiah burst onto the scene just two weeks ago in the Carabao Cup, when he scored with his first touch to send the tie into extra time, before scoring again to secure a truly memorable debut.

The 18-year-old showed his class in that game, but if you thought that his performance was down to pure luck or coincidence, then think again, as his record of scoring goals for the youth sides is phenomenal.

Prolific and composed, Nketiah scored 24 times in 35 appearances across the youth levels in 2016/17 to add to the 24 he netted in 2015/16. He also earned International recognition, scoring a hat-trick for England U18s in a 4-0 victory against Qatar in March 2017, then a treble for the next age group up a few months later.

He may just be a one hit wonder, who knows? But, Thierry Henry himself has said that Nketiah will always guarantee you goals after watching him at several youth levels and if praise from the King himself isn’t good enough for you then I don’t know what is!

Keep reading AFEFootballNews for all the latest on the talented young footballers from around the world!