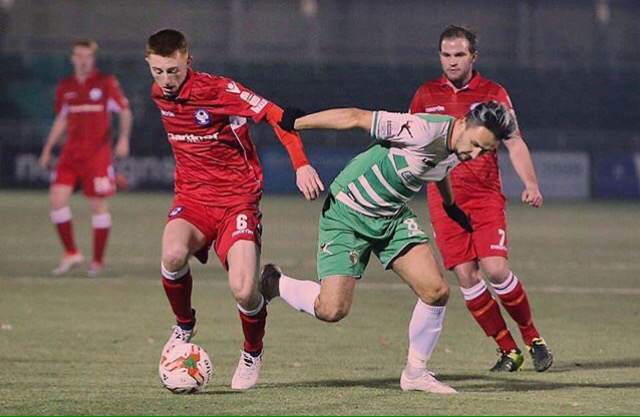 Despite being only 23 years old, Ryan J Edwards has been playing in the WPL since the 2012-13 season, where he made his debut with Connah’s Quay.

By now, he has racked up 87 appearances in the league (scoring 10 goals) and has had experience of playing for some of the best clubs that Wales’ Premier Division has to offer.

A youth team product of the Nomads, he signed his first full-time pro contract with TNS in January 2014. He was then loaned out to Cefn Druids in September 2014 to gain more first team experience and after being released by TNS at the end of the 2015/16 campaign, he signed for Bala Town in August of that year.

Arguably though, it was his loan spell at Airbus last season where he has looked most impressive. In a season where the club itself had a terrible time, being relegated to the HGA, Edwards stood out at times in the heart of their midfield. He made 18 appearances and scored three goals during his time there.

Ahead of the 2017/18 WPL campaign, Edwards has decided to sign for North Walian side, Llandudno FC. He’ll be looking to establish himself as a first teamer in a side that is unfancied by many, but can no doubt surprise almost any side on its day.

AFE: Hi Ryan, first of all, what made you want to become a footballer and who was your idol when growing up?

RJE: What young lad doesn’t grow up wanting to be a footballer? (fair point!).

As for heroes, it has to be Paul Scholes. Easily the best Centre Mid that the Prem has ever seen in my opinion.

AFE: Who are the best players you’ve played alongside and against and why?

RJE: Tough question that, because I’ve played against some top players.

Best was probably in a friendly game against Liverpool. I was thrown in the deep end against Roberto Firmino and I was chasing shadows all game long.

In terms of players that I’ve played with then I’d probably go with my good mate Rhys Healey. He burst on to the scene at 16 and his potential was frightening, and that showed because he’s now at Cardiff City.

AFE: Best manager you’ve played under and why?

He  trusted in me even at such a young age and gave me the platform to get to where I am today.

AFE: What was it like playing for TNS? Did it help you improve as a player?

RJE: It was a great club that definitely improved me as a player, but the lack of opportunities was frustrating.

As a young lad you just want to be playing football which I found hard to come by whilst at TNS.

However, it definitely matured me as a player and as a person and I have nothing but good memories of my time there.

AFE: You’ve had loans at Cefn Druids and Airbus, did you enjoy your time at both those clubs? What were the standout moments?

RJE: Not many stand outs to be honest as both clubs got relegated!

But during my time with Airbus, Tommo was great with me, letting me enjoy my football again despite the sour end to the season.

AFE: You’ve now signed for Llandudno what was the main reason for that decision?

RJE: Once I spoke with Alan Morgan I knew it was the right decision to sign for Llandudno.

I just wanted to keep on enjoying my football and it’s no secret they like to get the ball down and play.

It’s been a good pre-season so far and I’m looking forward for the WPL season opener at home to Carmarthen now.

AFE: Finally, what are your aims both personally and as a club this season?

RJE: Personally, as an attacking player my aim is to assist as many as I can and to chip in with a few goals as well.

As a club, I think we’ve got to be aiming for that top six. With the league being more competitive than it’s ever been since I’ve been involved I have no doubts that it will be tough.

With the squad that’s been put together this season though that’s what we’ve got to be pushing for.

Thanks for chatting Ryan and all the best to both you and Llandudno for the season ahead!