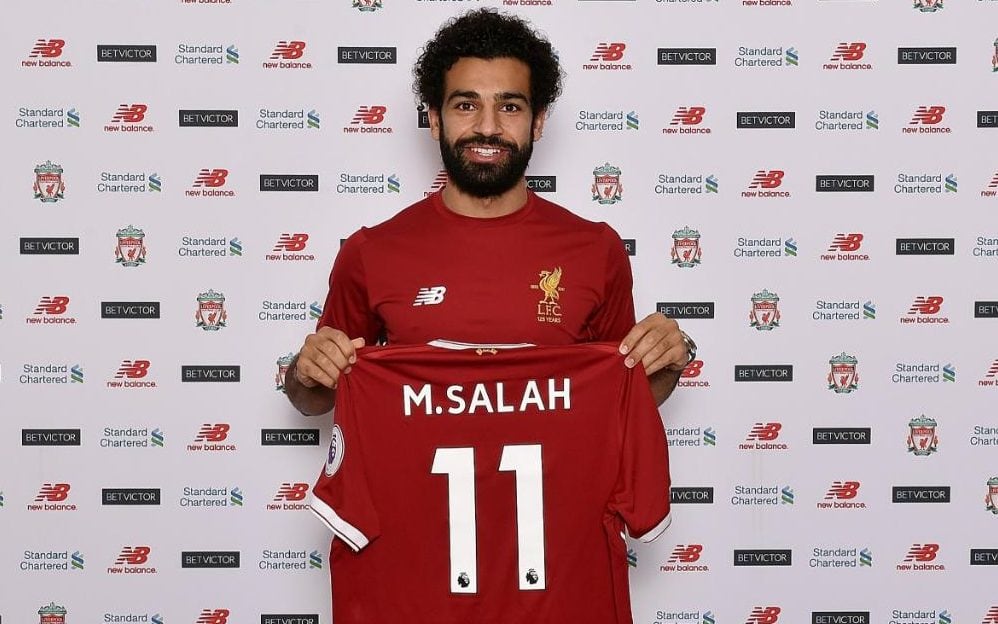 FOR many football fans, the transfer window can be a boring time (Particularly if you’re a Spurs fan at the moment it seems!).

But for others, it is a time of excitement and anticipation in waiting to see who their beloved club will bring in ahead of the new campaign.

Here, I choose just ten of my favourite Premier League transfers so far and explain how I think they can make a difference to their sides.

Arsenal fans, including myself, just couldn’t wait for this one to be officially announced.

It’s no secret to anyone that we have been needing a 20+ goals a season since dare I say it, Van Persie left the club back in 2012.

Olivier Giroud and Danny Welbeck are both decent strikers in their own right, but Lacazette should bring something entirely different and far more exciting to the Emirates this season.

The French international striker scored an incredible 37 goals in 45 appearances in all comps for Olympique Lyonnais last season and has scored 100 goals in 203 Ligue 1 games.

The 26-year-old is a proven goal scorer and if used correctly, I honestly believe that he can become an Arsenal great in years to come.

This one has been rumoured for the past three seasons or so now with the Manchester United legend falling down the pecking order at the club.

Everton fans are looking forward to seeing their prodigy to return to Goodison Park this season and after winning virtually every trophy available to him during his 14 years at Old Trafford, he will undoubtedly bring unrivalled experience along with him.

He may be getting on a bit now, but you simply can’t deny that on his day he will score you goals and win you games and that could prove vital to Everton this season as with the new additions to their side, I think they’ll be looking to fight for a place in that top four this year.

A scorer of some of the most wonderful goals in the Premier League era, Rooney will now be looking to take his boyhood club to new heights during 2017/18.

Mohamed Salah – AS Roma to Liverpool (Undisclosed, around £43m).

Talented winger Salah is returning to the Premier League with the Merseyside club having been unsuccessful at the first attempt with Chelsea.

Since leaving Stamford Bridge however he has turned his career around to no end, first with Fiorentina and most recently with AS Roma.

The Egyptian has lit up Serie A during his time playing there, with his electric turn of pace and his ability to create goals for his teammates as well as score a few himself. 15 goals and 13 assists in his 31 league appearances for Roma last season proves that he can be a right handful!

I think alongside, Daniel Sturridge, Divock Origi, Philippe Coutinho, Roberto Firmino and Sadio Mane, Salah will add even more attacking flair to an already dangerous Liverpool front line and fans of the club should be excited by this addition.

This could turn out to be one of the signings of the summer, particularly as the Bosnian has been bought in on a free.

Left back Kolasinac was included in the Bundesliga Team of the Year at the end of the 2016/17 season and so it was a bit of a surprise to me that Schalke had let him run his contract down and let him go on a free.

I expect him to take the place of Nacho Monreal as our starting left back in the side and I think his acquisition could spell the end of Kieran Gibbs’ long tenure at the club.

Known for being a tough tackling, no nonsense defender who loves a good old fashioned sliding tackle, Kolasinac, much like Lacazette, will bring something that Arsenal have been lacking for a long time to the side.

Okay so the price tag is a little insane, but the statistics show that the Belgian striker is one of the most proven PL forwards around, even if he is only 23.

Despite being booted out of Chelsea by Jose Mourinho when he was younger, Lukaku has now controversially decided to team up with the Portuguese manager once again at Manchester United.

It’s fair to say though that wherever he’s gone, he’s scored goals. He netted 17 in 35 PL appearances whilst on loan at West Brom in 2012/13, then 15 in 31 for Everton during the following season. A permanent move to Goodison Park followed and during his three year stay there, he scored 53 goals in 110 league appearances, which perhaps isn’t prolific but is nevertheless impressive.

He uses his sheer strength and power to outmuscle even the best of defenders at times and for a man who is big in stature, he is pretty agile and quick too.

Many have questioned whether or not he’ll be worth the hefty price tag that the Red Devils have forked out for him, but I will say this, he is almost guarantee to score at least 10-20 goals a season for the club, if not more of course.

This one has gone unnoticed by quite a few, but make no mistakes, Chelsea know exactly what they’re doing by bringing the German centre back in.

With Blues manager Antonio Conte opting for 5 at the back with his full-backs attacking often, he must be knowledgeable in the fact that Rudiger can play anywhere across the back line and although he is most comfortable at centre back, I think Chelsea may be looking to deploy him at left back at some point during the season too, as Nathan Ake has left the club.

However, with the departure of “Captain, Leader, Legend” John Terry to Aston Villa, Rudiger will also be seen as perfect back-up or even competition for David Luiz and Gary Cahill at the heart of the defence.

The 24-year-old, who’s now been capped 17 times by Germany, will feature regularly this season I think and could most certainly establish himself as a first choice defender should any of the back five be injured.

Surprising to say the least, but nevertheless a real bargain for the Hammers.

Hart’s falling out with Manchester City manager Pep Guardiola has led to him being frozen out of the Etihad. He was farmed out on loan to Serie A side Torino last season and will now spend the season (and possibly the near future) at the London Stadium with West Ham, as they reportedly have an option to buy him once the loan spell is up.

England’s number 1, despite his errors every now and then, is undoubtedly still one of the best goalkeeper’s around on his day. He won four Golden Glove awards in a row between 2010 and 2015 and has lifted the Premier League title twice whilst playing for City. He has made over 250 appearances in the league as well so the Hammers are getting a top class, experienced man between the sticks with this deal.

City’s loss will be West Ham’s gain and I think Hart will prove once again why he has been considered as one of the best shot stoppers for many a year now.

I’ve said it before and I’ll say it again, whoever gets Defoe is guaranteed goals and a true professional of the game. Luckily for Bournemouth, they’re the side who have bagged his signature.

In a truly dismal season for Sunderland last year that saw the club relegated to the Championship, Defoe was their shining star. He scored 15 goals in 37 matches and hit another 15 in 35 the season before that. Without him, Sunderland would have been down the season before in my opinion.

Now, the 34-year-old veteran striker returns to Bournemouth, where he has previously played on loan back in 2000/01 scoring 18 goals in 29 matches for the Cherries, so he is no stranger to their fans.

Difference now is that he brings with him some added experience and a truly cool head on his shoulders and if there’s anyone who can come off the bench to score a goal or two it’s most certainly him.

Off the pitch, he’s become an idol too. His close relationship with youngster Bradley Lowery, who tragically lost his battle with Neuroblastoma last week, was a truly beautiful sight to see and so rare from a footballer. He went above and beyond for the person he called his “best friend” and I for one respect him a lot for that.

It is so good to see him continuing his career on for at least another season and here’s hoping he can do his best friend proud at the Vitality this year!

Raheem Sterling better watch out cause this kid is looking as though he’s going to take his place in that City starting eleven this season.

Portuguese wonderkid Silva is yet another player who stood out for French shampions AS Monaco last year and he lit the league up with his mesmerising runs and dribbling abilities.

I think he’ll fit in effortlessly in that strong City midfield alongside the likes of David Silva, Kevin De Bruyne and Leroy Sane and he’ll add even more attacking threat to their already dangerous side.

In an era where Portugal are bringing through some of the best talents in the world (Renato Sanches, Andre Silva, Ruben Neves, etc.), Bernardo looks as though he could be one of the brightest and although he’s small in stature, I think he’ll settle in well into the Premier League, much like Sane did last season.

Not one that many will have noticed, but this will turn out to be a top deal in my opinion.

Premier League newcomers Brighton will need all the strength in numbers they can possibly afford to try and stay up in the league as other clubs around them will be strengthening their sides too.

Australian goalkeeper Ryan is a very underrated option in my eyes and I think they’ve done very well to get him in, particularly by attracting him from a club as big as Valencia are.

The 25-year-old made a name for himself whilst playing in Belgium with Club Brugge and went on to make over 70 league appearances for the side and has so far earned 35 caps for his country too, having played for Australia at the last World Cup in Brazil.

His shot stopping abilities are pretty decent and I think if he’s given the chance to play as the Seasiders’ number one this season he may just flourish and become a big name in the league over the next few years.

So, there you have it, some pretty brilliant transfers so far eh? and I’m sure there will plenty more to come before the end of August. Let me know what you think of my list in the comments below!