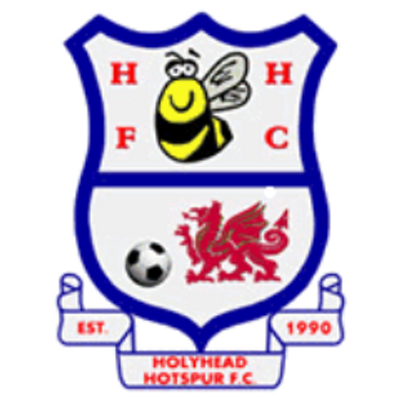 IN a new feature on AFEFootballNews, I will be taking a closer look at some of the clubs from around the world, starting off with a club right on my Anglesey doorstep, Holyhead Hotspur FC.

Hotspur are one of the most progressive football clubs in the North Wales region and currently play in the Huws Gray Cymru Alliance League (Second Division of Wales) at the New Stadium, which was opened in a ceremony back in July of 2007 when they took on a Wolves XI in a friendly match.

The current club was founded in 1990, when several prominent people involved in local football decided to get together and form it. At the time of its formation, there were four other local Clubs in the town operating in different leagues of the North Wales Coast Football Association.

By as early as 1997, with the success of Hotspur, all the clubs amalgamated as one and Holyhead Hotspur F.C. became the modern day successor to the famous and dominant ‘Harbourmen’ of the 1950’s/60’s. They formed a senior team and a reserve team and Youth teams called Holyhead Hotspur Peibio in recognition of their past association with Peibio, which helped foster great young footballing talent in the years before.

In 2009, ‘Clwb Cybi’ a special needs team was formed and underlined the club’s desire to be an ‘all inclusive football club’ within their football-loving community.

The Club has gone on to enjoy quite a bit of success over the years since its establishment. In three successive seasons (1995/6, 1996/7, 1997/8) they won the Anglesey League, Gwynedd League and Welsh Alliance League Championships.

The senior side had, over a period of time, held its position in the Huws Gray Alliance League, and the reserves had likewise done so in the Gwynedd League, resulting in both teams finishing runners-up in their respective leagues.

However, despite a more than creditable eighth placed finish in the 2009/10 season, Hotspur were relegated to the Welsh Alliance Division 1 after a very poor start and due to the fact that the Welsh Premier League had decided to reduce its membership for the 2010/11 season from eighteen to twelve teams, which remains the same today of course.

This undoubtedly came as a great disappointment to the club, but they didn’t have to wait long for their return to the Second Division. They became HGA Div 1 champions at the end of the 2011/12 and made it an even sweeter return by also winning both the Cookson and Barrett Cup competitions.

The club has remained at this level since those days and is a well-respected side within the HGA, having finished in the top 10 for the past five seasons. Last season the club enjoyed a decent campaign, finishing in eighth (out of sixteen teams in the HGA) once again with 42 points.

In terms of players, their current crop are among some of the brightest and most gifted players that North Wales currently has to offer, with seven members of their side recently being selected to represent Anglesey at the 2017 Natwest Island Games in Gotland, Sweden.

Alex Jones, Mike Kelly, Kenleigh Owen, Brendun Hogan and Paul Pritchard were all included in that squad as well as new signing John Littlemore who has had Welsh Premier League experience with Bangor City and of course with Cardiff Met last season. Fellow new signing Reece Brown was also named in the Island Games team and returns to Hotspur after formerly being part of their youth set up.

Talismanic midfielder, Dewi Thomas, who has become a favourite with fans and was a standout star for them last year, has just signed a new contract with the club and they have also brought in Tomos Clarke, who is a former Oldham player and can play comfortably in defence or in midfield.

They also have one of the most prolific strikers in the lower leagues in their side in the form of Mel McGuinness, who finished the 2016/17 season with 18 goals and has been their main man for many a year now. He was formerly on the books of Bangor City as a sixteen year old back in 2006.

Manager Campbell Harrison, Welsh Premier experience as a player and coach with both Porthmadog FC and Cemaes Bay FC. He is known for being a sound tactician who understands the game well and as a player, read the game well.

One of the highlights of the clubs campaign came at the end of the season when they made the trip to league champions, Prestatyn Town, who were promoted to the Welsh Premier League and won 4-1, inflicting their only home loss of the season upon them.

A strong finish to the campaign highlighted just how much talent Hotspur had within their ranks and they’ll be looking to do even better next season, particularly with even more experience being added to their squad.

Further good news for the club last season was that their reserves were allowed to compete in the Welsh Alliance Reserve League.

This league is seen by the competing Clubs as a development strategy and its objective is to develop the talent of each club’s young players. Last season, with the inclusion of Bangor City, Caernarfon Town and Prestatyn Town, the league was strengthened and their is hope that by playing in this league again, Hotspur’s youngster will be given great chances to improve their footballing skills.

The reserves side even beat Bangor City’s second string 4-1 to win the North Wales Reserve League Cup up in front of a large turnout at the end of the season.

Having worked with the clubs press officer, Gareth Davies, often whilst working for the North Wales Chronicle, I’ve learnt a lot about Holyhead Hotspur and have come to realise that the Habrourmen are a very well run club that give some of the top local talent on Anglesey the chance to shine in the Huws Gray Alliance.

Long may it continue!