The Premier League has produced its fair share of villains since its establishment in 1992/93.﻿

Hated by: pretty much everyone.

Everyone’s favourite thug recently returned to the Premier League with Burnley and has been putting in a decent shift for the Clarets.

However, he’s never too far away from controversy. Besides the series of arrests and fines (mainly for assault and mor recently gambling), he’s also no stranger to kicking off on the field.

In September of 2006, television cameras captured Barton exposing his backside to Everton fans, following City’s injury-time equaliser in a game at Goodison Park.

Several (hundreds probably) altercations later, including scraps with Ousmane Dabo, Fernando Torres and Gervinho, came the last day of the season incident against his former club, City in 2011.

He was sent off violent misconduct after elbowing Carlos Tevez in the face. Immediately after being shown a red card, he kicked Sergio Agüero in the back of the knee and attempted to head-butt Vincent Kompany.

Hated by many and loved by very few, it’s fair to say that Mr. Barton has certainly p*ssed a few people off during his career! 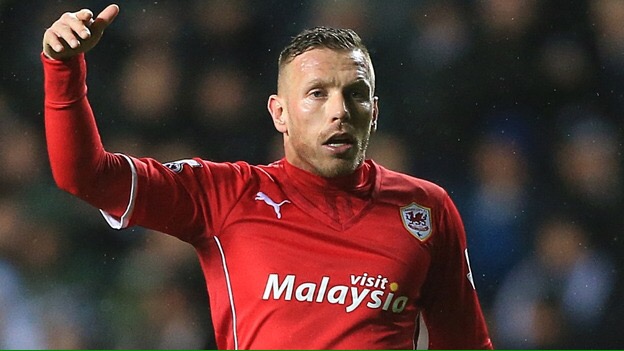 Hated by: Graeme Souness, some parts of Newcastle and probably John Arne Riise?

The little Welshman was always known for his fiery temper and often likened to a Jack Russell for his little man syndrome approach to confrontation.

Another one that was no stranger to controversy off the field as well as on it, Bellamy first bust up came in 2004 when he fell out with Newcastle manager Graeme Souness over having to play out of position. He then reportedly sent abusive texts to club captain Alan Shearer. Unsurprisingly, he swiftly left St. James’ Park soon after.

The most twisted and quite hilarious story of his came when he played for Liverpool back in 2007. It was alleged that Bellamy attacked team mate John Arne Riise with a golf club during a team training session in Portugal. In the first match following the incident, away at Barcelona in a Champions League last-16 round first leg, Bellamy celebrated his equaliser, by emulating a golf stroke. Classy.

Despite his antics, Bellamy was actually a great player on his day and became a firm fans favourite particularly whilst playing at Manchester City and Liverpool.

But many would still say he’s an arrogant sod of course. 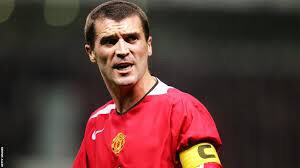 Hated by: Many. Arsenal fans in particular.

Boy do I miss the days of Roy Keane and Patrick Vieira scrapping it out on the field.

Whether you loved him (which probably means you’re a United fan or hated him, you’ve e got to admit that he was a great player who added some fire and passion to the side. Sometimes he overstepped the mark though.

Nowadays he’s angered a few people with comments made in his punditry position on ITV.

However, h﻿is most infamous moment in the spotlight came in 2001 in a Manchester Derby match. Five minutes from the final whistle, he was sent off for a blatant knee-high foul on Alf-Inge Haland in what was seen by many as an act of revenge, after Haland had stood over him goading him when Keane injured himself trying to tackle the Norwegian four years earlier.

He later stated that he had no regrets for the incidents and called it “eye for an eye”. Seriously, don’t mess with Roy Maurice (yes really) Keane.

Hated by: the fans, the players, the referees, the pundits, the press, God, Allah and Jesus. Anyone with half a brain cell basically.

Diouf was the ultimate villain, plain and simple.

It seemed as though, no matter where he went he was bound to make enemies and his controversies would always overshadow any glimmer of talent he may have had.﻿

﻿During his early Premier League career, Diouf was involved in several incidents where he spat, or allegedly spat, at fans and opposition players. In September 2009, Diouf was questioned by police after allegations that he had made a racial slur to a ball-boy during a match at Everton, telling him to “f**k off, white boy”.

A whole host of fines, allegations and stone cold evidence against his name have ensured that﻿ Diouf goes down in PL history as a “bad lad”.

Hated by: Wayne Bridge and every insecure boyfriend/husband in the world.

John Terry became hated more for his antics off the field than on it, after he allegedly had an affair with Vanessa Perroncel, the former girlfriend of Wayne Bridge, his former Chelsea and England teammate back in 2010. 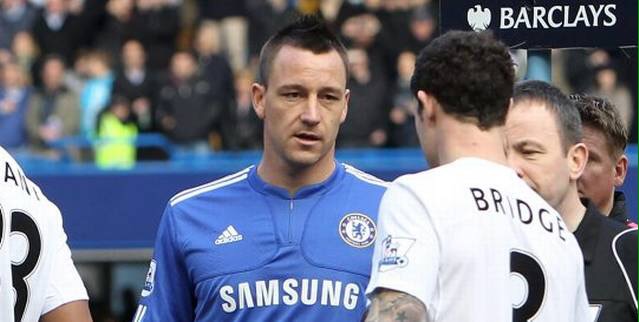 The media coverage on the matter was sensational and led to Terry being booed and jeered by fans all over the country.

If that wasn’t bad enough, he then went and added more fuel to the fire when he was placed under police investigation following an allegation of racist abuse made at Anton Ferdinand during a match vs QPR in 2011. He had been accused of calling him a “f***ing black c**t” and later admitted that this was true. 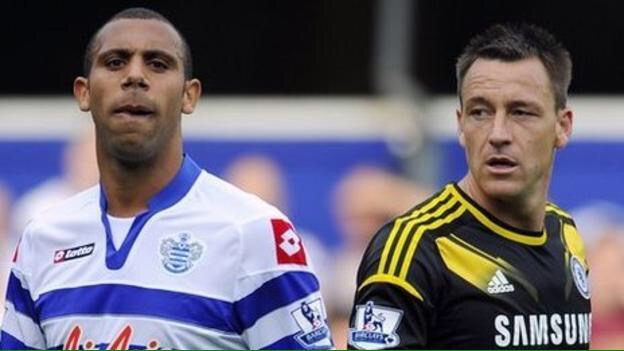 He became notorious with fans of the Premier League following these two personality defining incidents and has received (maybe deserved?) abuse from the fans. 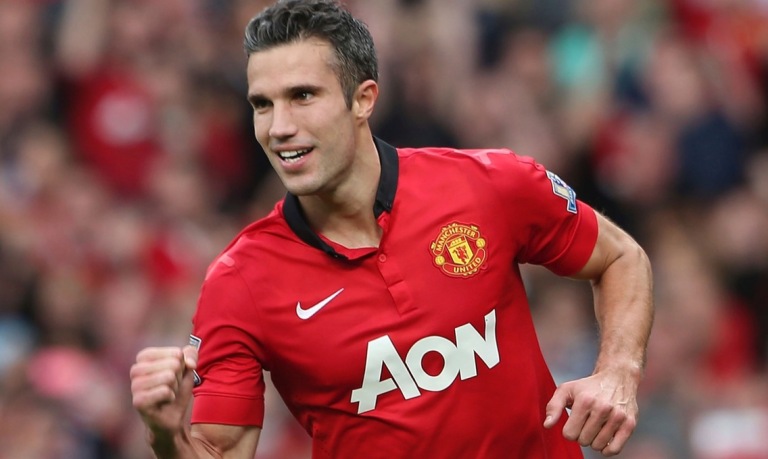 Hated by: Arsenal fans for being a Judas.

Let’s be honest, leaving a football club can’t be easy for a player. The fans have loved you and helped you through hard times so it can be hard to say goodbye.

Van Persie, on the other hand, gave no such care or compassion when he turned his back on Arsenal in 2012.

Not many players will have faced the kind of hatred and anger that Van Persie received from Gooners. Burning shirts with his name on the back outside the Emirates were just the tip of the iceberg.

He instantly went from club legend to number one enemy and of course went onto score for United a couple of times against Arsenal after his move.

Arsenal fans will probably never  forgive him, but the Old Trafford faithful will always remember him for helping them lift the title in 2012-13.

Hated by: Arsenal fans for being a Judas, wait this sounds familiar. Also many other fans.

Up steps traitor number 2. Arsenal are the gift that keeps on giving when it comes to producing players who turn into complete and utter Judas’ (I’m not bitter I swear).

Adebayor left Arsenal to join Manchester City’s revolution of highly paid players in 2009. He turned into pantomime villain in a match against Arsenal in that year, when after scoring a goal, he ran almost the full length of the pitch to the Arsenal supporters and celebrated in front of them.

To add further insult to injury, in 2011 he joined North London rivals Tottenham and once again scored against the Gunners. Ouch.

Other fans of the Premier League have also spoke of their hatred of Adebayor. Crystal Palace fans, the club which he last played for in England, accused him of being lazy and only wanting to be paid and didn’t cared if he played or not.

No love lost for Ade.

Hated by: Anyone that hates a good old fashioned crybaby.

With a face that only a mother could love, Costa arrived on English soil in 2014 and didn’t take long to start showing his true colours.

He’s become highly hated by opposition fans for his style of plate which is at times very aggressive and provocative.

He has stamped on players and constantly winds them up to try and get a reaction. 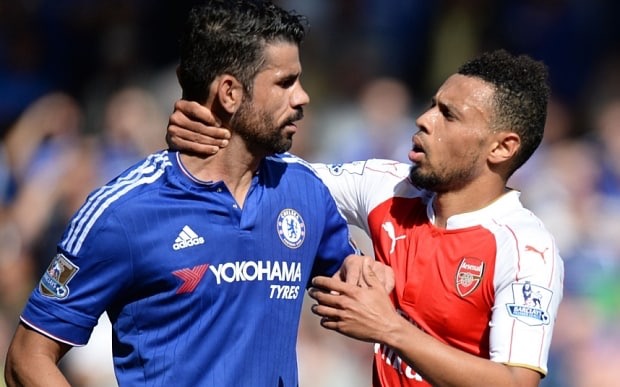 ﻿Incredibly he has never been sent off during his time at Chelsea, instead only being retrospectively banned for his actions by the FA.

﻿One rule for Diego and another for everybody else it seems.
Marouane Fellaini

Hated by: Anyone who’s felt the wrath of his pointy elbows and the fans.

﻿Has there ever been a player who uses his elbows as much as Fellaini does?

During his debut season in 2008 with Everton, he was booked 10 times in his first 17 games and began to show the Premier League his rugged style of play.

In 2012, still at Everton, Fellaini was banned for three matches by the FA after headbutting Ryan Shawcross during a game against Stoke City.

After moving to Manchester United in 2013, he continued his antics of bullying other players with elbows to faces, stamps of legs, pulling of hair, etc.

He even managed to annoy his own fans this season. Back in December,  when making his 100th appearance for United against his former club Everton, he gave away a penalty just a few minutes after coming on as a sub. Leighton Baines successfully converted the spot kick in the 89th minute to secure a late equaliser for the Toffees in a match that finished 1–1. Oops. 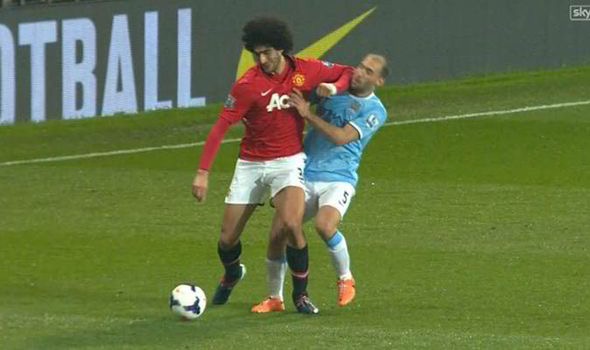 Famed for the Afro, but even more so for his physical presence, Fellaini is well known by every Premier League fan. 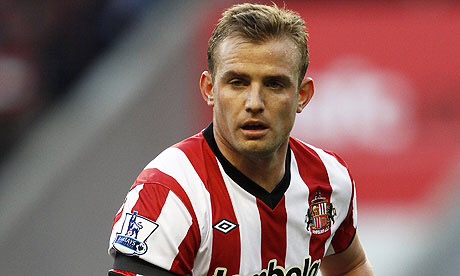 Hated by: the referees.

Arguably, Snderland star Lee Cattermole is the ultimate bad lad as he has received red and yellow cards more frequently than any player in the history of the Premier League.

That total of 91 cards (7 reds, 84 yellows)﻿ leaves him seventh in the list of the Premier League’s all-time worst disciplinary offenders.

A referee’s worst nightmare, Cattermole is not exactly loved by fans either (except Sunderland’s but I’m sure even they’ve grown tired of his frequent dismissals at times).

Not one to leave people feeling left out, I also feel that I need to give s﻿pecial mention to:

One thought on “10 of the most hated Premier League players ever.”